Views From the Enemy Camps 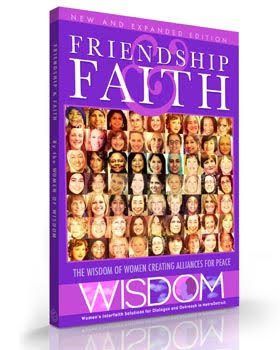 When the sirens went off again, we all went and sat in the air raid shelter expecting to die there. There was no stopping the atomic bombs if they hit.

In this section of the book, women are telling stories about mistaken impressions of people—fearing that someone might be an enemy. Motoko’s story turns the perspective 180 degrees. While still a girl, she experienced the suspicion and enmity of two nations. Born in Boston in 1927, Motoko’s lifelong pursuit of education eventually led, in the 1970s, to a doctorate and professional expertise in children’s literature. She remains deeply concerned about the quality of life for children and families around the world. She is a vigorous activist on behalf of ending nuclear weapons, promoting world peace and improving interfaith relations through her own lay leadership in the Presbyterian Church (USA).

I lived in America when Pearl Harbor was attacked. So, in December 1941, I was perceived as the enemy in my hometown of Cambridge, Massachusetts.

I lived in Japan when the atomic bomb was dropped on Hiroshima—so, then, I was perceived as the enemy in my family’s homeland, where my clothing, my language and even my particular style of wire-rimmed glasses made me stand out as the enemy—this time as one of the Americans who was dropping bombs.

I was an enemy in both of my countries.

When the war started in 1941, I was 14 years old and in the ninth grade. My father was an orthodontist who taught at Harvard. He had been living in the United States since the 1920s, but the Oriental Exclusion Act of 1924 prevented him from becoming an American citizen. I was born in the U.S. and so was my brother, who was in fourth grade, so we were both dual citizens of Japan and the U.S.

When news of the attack on Pearl Harbor came, only my brother and I were at home. We heard it first from a Japanese Harvard student who called the house. He asked for my parents. I told him they weren’t home. Then, he said, “Japan and America are at war!”

I had no idea what to do. I called for my brother to come inside. We sat there, inside the house, until my parents came home.

When I told my parents the news, I remember them turning absolutely white. They were aghast. We turned on the radio and we were glued to the announcer’s voice saying, over and over again, that Pearl Harbor had been attacked.

The big question in our household was: Do we go to school the next day?

My brother and I attended a small private school called Buckingham—and we did return to classes the next day. That school had an excellent program and I remember the principal said to the whole student body at an assembly: “There will be no war within the walls of this school.”

My brother and I were the only Japanese children in the school. So everyone was looking at us.

The principal also talked individually to children who were our friends, and they understood that they needed to protect us. My best friends would sit in a circle around me. And my brother was surrounded by his friends at recess. One of his friends told other boys, quite loudly: “You touch him and I’ll knock yer block off!”

But school wasn’t the only place we had to go outside our home. Each week, I had to take a bus across the Charles River into Boston to my piano lesson. The first time I had to do that I sat there, so frightened, in my seat on the bus: If they realize that I am Japanese, what will they do to me? I wondered. And I worked out a plan in my head: If someone confronts me, I’ll tell them I’m Chinese. They won’t know the difference. But, there was no problem on the bus.

My parents faced far worse problems. One day, the police accosted my mother, claiming she was taking a photograph of a bridge; they had mistaken her rectangular-shaped purse for a camera. Then, my parents came home another day with funny stains on their fingers because they had been fingerprinted. The Japanese students at Harvard were in trouble. Some of my father’s patients cancelled.

We got a telegram from the U.S. government that said: If you desire repatriation to Japan, report to Ellis Island at such-and-such a date. My parents carefully considered this, and they decided we were no longer welcome in the U.S. My father decided that he would stay and continue his dental practice and keep our apartment, but that my mother, my brother and I would go to Japan.

Do you know who stepped forward to help us at this very difficult time? Quakers. We were Buddhist and Shinto, like most Japanese families, and so I was absolutely bewildered to meet these people who called themselves Quakers. When other people were trying to kick us out of our apartment and were refusing to allow my mother to shop in their stores—the Quakers came and befriended us. They even escorted us to Ellis Island to make sure we were safe.

In 1942, we moved to Tokyo. We stayed with my aunt, my mother’s oldest sister. We had lots of family in Japan—aunts and uncles and cousins. I went to an international school run by the Convent of the Sacred Heart and was taught by nuns. My brother and I could speak and understand Japanese, but we were terrible at reading and writing the language. Fortunately our instruction, at first, was in English.

Then the war got worse, and we weren’t allowed to speak English: It was the enemy language. I stood out wherever I went because my clothes were so obviously American. We knew that people were watching us. We could go outside in the morning and find boot prints in the dirt: places where the secret police had stood near our windows at night, listening to what we were saying in the house.

Once again, friends from school were so important. But we had to be careful wherever we went. One day, a friend and I forgot and began speaking English on a public street. The principal called us into the office and said that we should never do that again! We were speaking the enemy language. It was dangerous.

As the war went on and the Americans got closer to Japan, there was first a campaign with incendiary bombs that was devastating to some Japanese cities, where the homes burned easily. At least during the firebombing, there was something we could do: we could join a bucket brigade to put out fires. I remember one woman stood up on her roof, sweeping cinders away with a broom.

But nothing could be done about these atomic bombs that could wipe out an entire city with a single blast. After the news of the first atomic bomb—and when the sirens went off again—we all went and sat in the air raid shelter, expecting to die right there.

I got a job working for the Allied Occupation of Japan, where I could earn money to pay for my passage back to the U.S. Then I enrolled at Radcliffe, and worked my way through college by looking after children for professors and other families.

What I remember most about the whole experience was the importance of friends, the surprise of these Quaker people who befriended us—and how doubly wonderful peace felt when the war was over!

Getting in touch with friends again after the war was absolute heaven!

The world seemed to begin again.