Is Lent over? Did I miss it?

Are you reading this and Lent has passed you by?

Once again, don’t worry. Did you start this Lent with a visualization of how it would go but somewhere down the line you stopped adhering as closely to your Lenten journey as you wanted to? Did Lent just become a second New Year’s resolution?

Now you’re sitting here wondering: is it possible to catch up, or do I have to wait until next year rolls around?

It’s difficult to have the entire Lent experience without adhering to the proper dates (Lent 2014 starts on Wednesday, March 5 and ends on Thursday, April 17, by the way), but you can certain prepare and have your fill of the Lenten spirit.

Think on the final passage of John’s Gospel:

There are also many other things that Jesus did. If every one of them were written down, I suppose that even the world itself could not contain the books that would be written.

Can you apply this to your own life? How do you interpret a statement like this, particularly that poignant word, “If.”

“This is what John is saying in the closing of the Gospel,” writes David Crumm, author of Our Lent, “Not that the story is finished–but that John is finished writing. He is saying, in effect: The ultimate thing in our human pilgrimage through God’s creation is the story itself–the narrative we carry with us into the rest of the world that can connect and reconcile all things.”

Do as John did, pick a point to finish writing your Lenten journey — whether you missed it Lent completely, partially, or just didn’t quite follow through as much as you wanted to. Then, continue onward, weaving your own story and ensuring that even if it isn’t written down, if it were, it’d be worth reading. 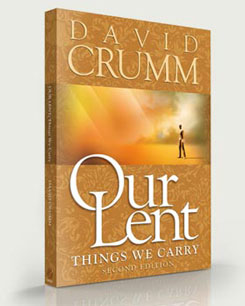