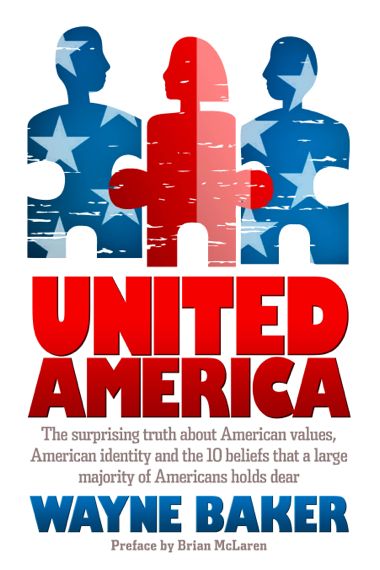 CLICK THE COVER to learn more about the book.

United America and author Dr. Wayne E. Baker are crossing the nation, helping communities to rediscover their common ground through 10 values that Dr. Baker has documented through research at the University of Michigan. To ask about scheduling Dr. Baker for an event—or to ask about ordering a quantity of books for a “group read” in your community—email us [email protected]

LEARN ABOUT United America on this Resource Page, including free downloads: full-color posters of the 10 values, study guides and even a gallery of American Images that Dr. Baker uses in his public programs.

ENJOY an in-depth interview with Dr. Baker about United America.

THE FOLLOWING NEWS ITEMS show how Dr. Baker’s book is being welcomed nationwide. If you plan an event in your area involving United America, email us and your news may be listed here. We invite you to share or re-post any of these news items to spark interest in your community.

Many authors are urging Americans to find a common ground for civil dialogue—including Brian D. McLaren, who wrote the preface to Dr. Baker’s book. This spring, Dr. Baker is crisscrossing the country speaking at various events. Please, email us at [email protected] (Or, you can visit the United America Press Materials page in our website.)

YOU CAN HELP SPREAD THE GOOD NEWS, right now, by using the blue-“f” Facebook or envelope-shaped Email icons.

Share this article:
Visit Our Bookstore
Meet Our Authors