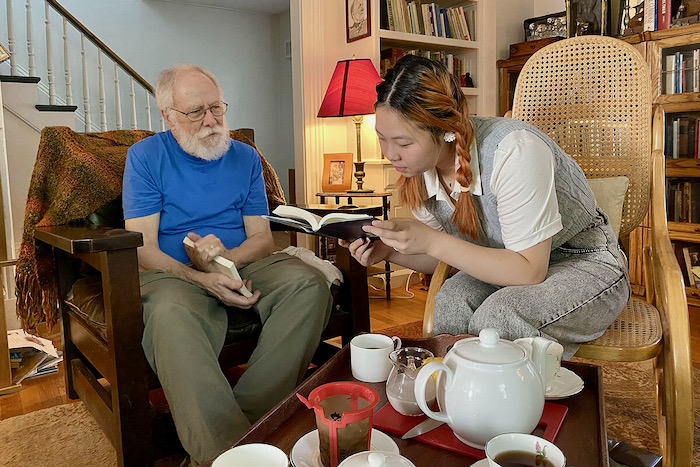 Duncan Newcomer receives the calendar-book he bid on and won at the Emotional Value Auction in Belfast, Maine. Yan Xuan, who put the book up for auction, delivered it to him in person. The auction was orchestrated by Adriane Herman at the Colby College Museum of Art. (This photo is used courtesy of Adriane Herman, Emotional Value Auctioneer, and Residential Fellow, Lunder Institute For American Art.)

EDITOR’S NOTE: Lincoln scholar, author and ReadTheSpirit columnist Duncan Newcomer appeared last week in our online magazine with a tribute to his beloved Abyssinian cat Sonnets to mark St. Francis Day. Recently, Duncan has been writing a lot about emotional and spiritual resilience. This particular story—in a much-shortened form—originally was part of a Christian Science Monitor report. Here is the original version, illustrated with photographs taken by Adriane Herman, the artist behind this innovative idea. To learn more about her work, please visit her website. Among the dozens of fascinating photographs you will find at Adriane’s website is the “100 Year Old Six Quart Wagner Ware Cast Aluminum Tea Kettle” mentioned in Duncan’s column.

Have you ever wondered about that pearl of great price? Where was it from? Who had owned it?

That kind of mystery was awaiting my wife and I as we decided to break out of our COVID isolation and drive across Maine to the Colby College Museum of Art. We had no idea what was waiting for us—an auction, but not just any auction. This one was billed as “An Emotional Value Auction.”

What in the world was that? We were about to find out.

When we entered the auction space, it looked like an indoor yard sale. On the tables we saw spread out the usual yard sale items: an antique tea kettle, an old clock, a creamer in the shape of a chicken, an out-of-date Chinese calendar and more.

We strolled and looked. But when we tried to find the price tags, there were none. Instead, on each old item there was a brief story about its meaning to the owner.

On a “100 Year Old Six Quart Wagner Ware Cast Aluminum Tea Kettle” was this confession: “I stole this kettle from a hunting camp when I was a very stoned and drunk teenager. I never have forgiven myself for that transgression, and I kept the kettle all these years to remind me lest I forget.”

On the “Vintage Cincinnati Time Clock,” we found a story of how the owner’s employees refused to punch in and out of work with it—and what that had meant to him.

The chicken creamer came from a couple whose marriage had been good but ended in a bitter divorce. Years later, the wife still could smile, remembering the hilarious gagging sounds her ex would make as she poured cream out of the chicken’s mouth. Maybe someone else now could have bitterness turned back into sweetness and laughter.

What was going on here?

The auction was an interactive art exhibit. The artist, Adriane Herman, calls herself an “Experience Broker.” This exhibit, she explained, was an Emotional Value Auction.

So how do these items change hands?

First, the owner pens a short essay describing the meaning behind an object they are offering. If you see something you’d like to have, your wallet stays in your pocket. Instead, you reply with an essay or even a single sentence of your own. You write on paper attached to a clipboard, telling the giver-owner why you want this particular item and what it would mean for you to possess it.

Your “bid,” along with all the others, is delivered in the next few days by the Broker Artist to the owner donor. The owner reads every essay attached and decides who gets it, based on the feeling and the values expressed.

For Adriane Herman, this is a way to expand the traditional boundaries of art. If authentic art invites a personal connection and expresses a vivid experience, then the desire awakened in someone—that person’s “attention” and “presence”—has emotional value. Our world is already full enough of “consumerist capitalism,” but we have a weak and undeveloped spiritual economy. Giving value to the emotional links between objects and people and their stories creates new bonds of connection across our communities.

As I wandered around, I was transfixed by a red-and-gold Chinese calendar for the year 2019 in the form of an exquisitely bound book. The pages displayed a year’s worth of pictures including vases, embroidered fans, porcelain fruits and, since 2019 was the Year of the Pig, one entire month of photos of tiny pig sculptures.

Attached was an essay by a young Chinese college student describing how she prepared to move halfway around the world by purchasing two of these Palace Museum Calendar books. One copy she left back in China as a link to her family at home, and the other one she brought with her to Maine to ease her loneliness. None of the calendar pages were used or removed, she wrote, on account of their sheer beauty.

There was nothing random about my interest in this object, which connected with my own recent fascination in all things Chinese: philosophy, poetry, art, novels, biographies, histories. For me, this has been a refreshing break from years of reading, pondering and writing about all things American. That emotional, spiritual and creative shift I had been making for many months seemed to be crystalized in this red book.

Even though it was useless as a calendar, I had the strong desire—the “attention” and “presence”—to take it home. So, I responded on the “bid form” with a note about how this book was awakening in me my own love of Chinese culture.

In the days that followed, my desire to have the calendar deepened. Would my story speak to the owner?

Finally, I learned that my own life story, as expressed in my brief note, had connected with the owner’s life story through that object. The original owner was willing to “release” her beloved touchstone to me.

Beyond expanding the definition of art, I was impressed with this new kind of global art economy Adriane is charting for us! I was not prepared for the potency of the freedom that comes with an exchange in which no money changes hands.

I was not even thinking about how I would also find new friends when this object was hand-delivered to me by the student—and her artist mentor who documented our meeting that day.

But that is indeed another story—the rest of an unfolding story, answering the isolation of COVID with new connections. 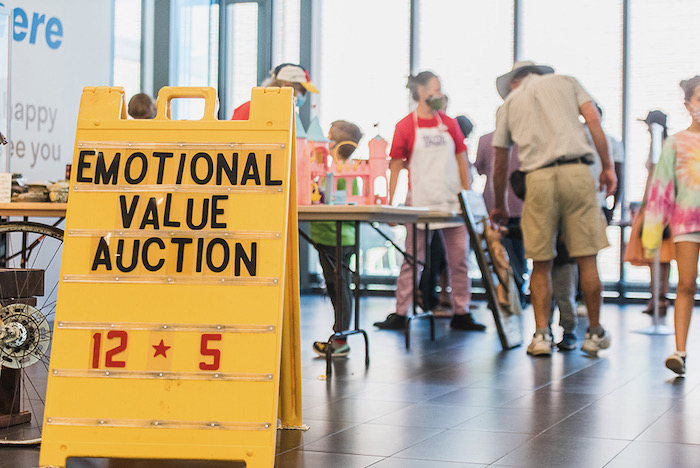 To learn more about Adriane Herman’s work, please visit her website. She tells us that she welcomes contacts from people nationwide. She is Resident Fellow at the Lunder Institute for American Art, which is a collaborative initiative with the Colby College Museum of Art. The Lunder Institute for American Art supports innovative research and creative production that expands the boundaries of American art. Here is a story from the Bangor Daily News about another recent auction coordinated by Adriane.

To read more of Duncan’s columns, click on this index of his contributions to ReadTheSpirit. That index begins with his recent column about his beloved Sonnets, the cat.