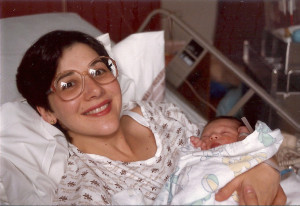 My boy has a big birthday coming up soon. How did the years fly so swiftly?

Decades ago, soon after my pregnancy was confirmed, I began getting boy vibes. This was confirmed by everyone once I began “to show” (quaint  last-century euphemism for this century’s  “baby bump.”)

I carried high. A boy! one neighbor predicted. I was glowing. Definitely a boy, declared Aunt Ruth. You NEVER contradicted Aunt Ruth, and so I began thinking up boy names. As the weeks progressed and the bump turned into a bulge and then a behemoth, it felt like my abdomen had been invaded by rock ’em sock ’em robots. Boy, definitely boy, said a co-worker whose wife’s second cousin had three sons and who swore each one behaved as if her uterus were Madison Square Gardens boxing ring.

As the eldest of three sisters and the daughter of one of three sisters, boys never registered for much of my youth. They were pretty much an alien species until sixth grade when I developed a huge crush on Edward Lamb. What if my intuition, the neighbor, Aunt Ruth and that second cousin who named her sons Evander, Sonny and Tyson were right? What would it be like to raise a son?

I could have never imagined over those nine months the myriad of unexpected delights that awaited me—the thrill of watching utter physical abandon as my son raced across fields, his childhood obsession with tools, his lifelong passion for cars, a spur-of-the-moment jump into a lake to dog paddle with a Labrador Retriever. 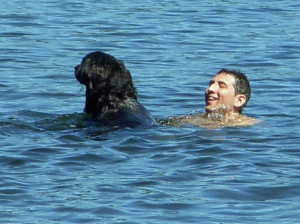 There was the nightly heart-brimming joy of peeking into his room to watch him sleep, and the pride of watching him graduate from high school and then college. There was the frantic trip to the emergency room to stitch up the cut to his inner cheek when he decided to play trampoline on the toilet seat. There were dandelion bouquets, endless readings of Richard Scarry books, and a Mother’s Day poem a few years back whose pages I bound within beautiful paper and keep by my bedside. There was also that tumultuous fifteenth year when querulous aliens possessed his body. They departed as swiftly as they arrived, returning to us the familiar kind, thoughtful, funny, creative son who suddenly needed a razor and had an unending affinity for Polo aftershave.

My boy has a big birthday coming up soon. Aunt Ruth and the others never told me about the singular sweetness of boys and a mother’s astonishment at their manliness. How did such a big man come from me? I have watched my son triumph in achievement, and grieve as some dreams were set aside.  He has never allowed the former to swell his head nor the latter to curtail his future. My hopes for him expand to include his sweet and beautiful wife. And a baby bump one day?

My boy has a big birthday coming up, and so I wish for him the realization of all his dreams and more. May he be blessed with health and long life, with laughter and good deeds. May he come to know the joy of parenthood and to remember, should aliens ever possess his teen-aged children, they will depart as swiftly as they arrived. 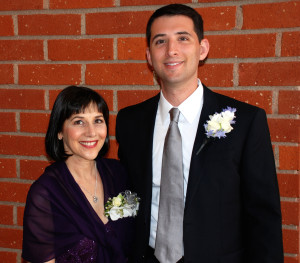 Elliot, fifteen million minutes old and then some