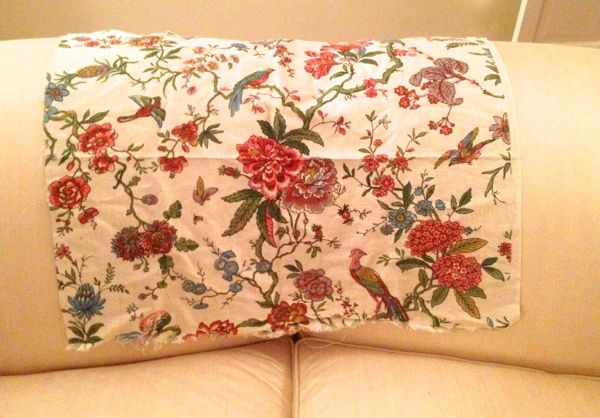 For nearly thirty years, my mother, sister, and I circulated among us a remnant of printed linen that began life as full-length tie backs at my bedroom windows. Today, even in its two-yard microcosm, the fabric radiates elegance. Cobalt asters and pink astilbe bloom atop celadon stems. Butterflies, their ocher and lavender wings spread in flight, cross paths with scarlet hummingbirds. I marvel that my mother envisioned for me not so much a preteen’s refuge but a stage set worthy of Madame Butterfly.

The fabric was chosen to complement an early 20th century Chinese rug across which pranced the coincidental mates of the peacocks at rest on my curtains. The rug and fabric date from the mid-1960s, a time when my parents were awash in a flood of stock market gains. Feathering their nest was a priority and they did it with an eclectic flourish. Their marriage didn’t survive, nor did the house, but for over a quarter century, the fabric traveled from mother to sister to sister and back again, a woven reminder of earlier times.

When my mother first lit—newly single with old furniture—she draped the linen over an old camp trunk and topped it with glass. Around that impromptu cocktail table she discussed Gloria Steinem and the burgeoning Women’s Lib movement with her new-found (and defiantly single) friends. The fabric belonged to an era of kept women and marital commitments. It whispered of bound feet—amidst shouts of “Burn your bra!” Liberated, my mother stowed the linen in the trunk.

But, not before swaddling it in tissue paper.

When my sister went away to college the fabric went too. Draped across her bed it brought a dash of class to her dorm room. Frosh tastes change faster than a revolutionary’s tactics, however. The bourgeois coverlet was replaced by a serape; back it went to my mother who by then had made her peace with bras but still had no use for tablecloths. She stowed the linen once again.

My sister surprised me with the remnant some birthdays ago. I traced for old time’s sake concentric rings of chrysanthemum petals, edging with a fingertip the fantastic plumage of my birds. I recalled not only floor-to-ceiling drapes and antique rug, but the five-branched crystal chandelier as well. Routinely my friends and I would detach its crystals to reenact the prism scene from Pollyanna. After draping it over a neutral couch for a year or so, I put the cloth away like mother and sister before me. I knew why they never did anything more creative than I had: No project seemed worthy of destroying the whole, as if to do so would rend forever the few fond memories of a time long past.

Then the coal bins arrived—antique brass bins that had flanked the fireplace of that same home. They too had traveled from mother to sister before coming to rest at my living room hearth. The bins’ padded lids enable them to double as fireside seats. My sister had covered the lids with a brown silk that clashed with our living room’s ultramarine upholstery and plum and pink Persian rug. Monthly, my husband implored me to replace the brown silk, but try as I might—I came up empty handed.

Then I remembered the remnant.

Even before unwrapping its tissue paper cocoon, I knew it would be perfect. The time had come to give a home to the fabric that had traveled like a cloth vagabond for so many years. Yet after measuring and remeasuring I could not pick up my shears. I dreaded making that first cut, knowing I had to get it right on the first try. I held my breath and set to work. When the job was done, I was euphoric. The print worked perfectly in the living room, as if the colors in its palette had been an unconscious driving force in my mind’s eye all along. Bird and blossom lent a touch of light and fantasy; their colors echoed in nearly every corner of the room. Finally. The yardage no longer languished unappreciated. I had created something new to savor.

Cloth and coal bins evoked fond memories, but the folds of those memories were creased with sadness, too. That nest so lavishly feathered had eventually been dismantled twig by litigious twig. Yet years later the disparate pieces had come together, symbolic perhaps of what children do with their parents’ legacy. I’ve tucked away the remaining yardage for my daughter to graft onto some piece gleaned from this house one day. But I doubt she’ll feel the need. Nothing has burned here but the hearth fires of our two-parent home. Not bras. Not bridges.

She will not know from remnants. 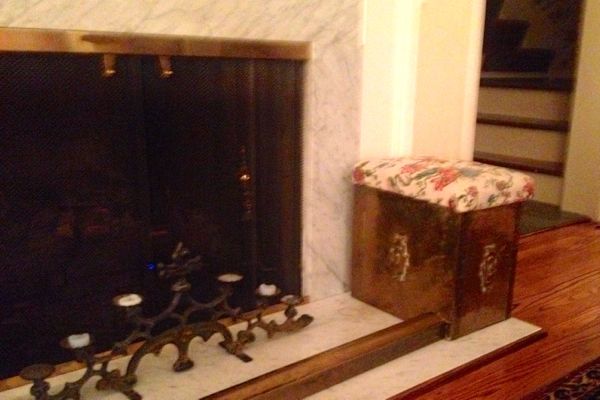 IF YOU ENJOYED THIS COLUMN …

Please share it with friends. Use the blue-“f” Facebook icons or the envelope-shaped email icons. Also, you’re likely to enjoy Heather Jose’s column this week on What do we carry with us—when we give up the family home?

7 thoughts on “Home Making: The sisterhood of the traveling remnant”