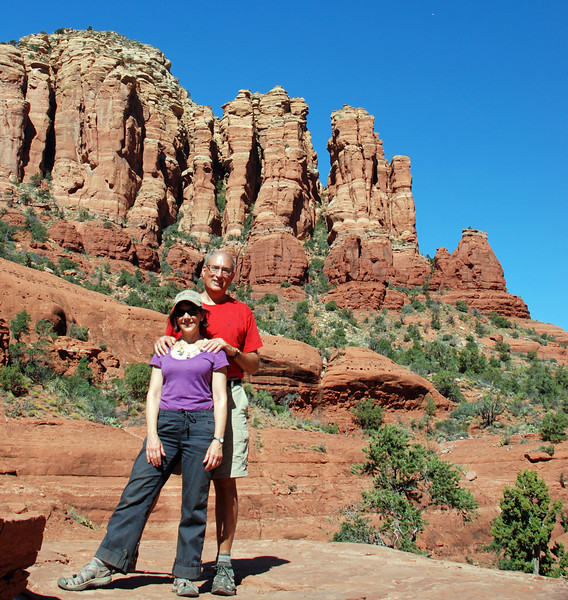 The Yiddish expression, “Mentsch tracht und Gott lacht” is a wry, slightly humorous acknowledgment of life’s unpredictability.  Until it isn’t.

Monday’s plan was an exercise class followed by lunch with a friend, then a quick stop at Trader Joe’s before heading back home to spray the azaleas, make dinner and see the movie Hugo with my husband. He was off getting his yearly physical and then a workout at the gym. God probably starting laughing somewhere between lunch, and the cereal aisle at Trader Joe’s.  By the time I got home and figured out dinner, He must have been thundering the Heavens with guffaws.

During my husband’s physical, the doctor discovered a blood clot in his thigh. No need to go all Gray’s Anatomy on you, save to say hosannas to the nurse who noticed one calf was appreciably larger than the other, and to the doctor for running a test “just to be sure, just to rule out anything major. All your numbers are those of a much younger man…”

The doc called just as I was heading upstairs to change into my gardening clothes. It was major.  Four star general major. “He has to go to the emergency room. Now. We don’t want this thing breaking up and traveling.  Boy, are you lucky. Had this been three days later…” I cut him off right there, grabbed my keys and headed out.

They were waiting for me at the entry of the medical complex.  I eased my husband into the car, thoughts of nitroglycerin dancing in my head. We set off counting the miles and the minutes. Somewhere along the way we also crossed that invisible line separating the garden-variety health concerns of middle age and the big stuff that makes old age irrelevant.

Forty-eight hours later (feels like forty-eight years) we are home. There will be new protocols to follow for a while, danger signs to stay alert for, regular tests for a few months, diet modifications.  Who knew spinach and Brussel sprouts could be put on a no-fly list?

God might have been laughing His head off on Monday, but He was also there in every “coincidence” that tipped the scales in our favor: the eagle-eyed nurse, the just-in-case diagnostic test, the fact that for some spontaneous reason, my husband rescheduled his physical from mid-March to early February. We are grateful for so much: our friends and family who rallied ‘round, the care he received, the two-ton elephant in our nation’s living room: good health care.

Am I still making plans? You betcha. God can laugh all He wants. I will meet that laughter with another famous Yiddish expression: L’chaim. To life.