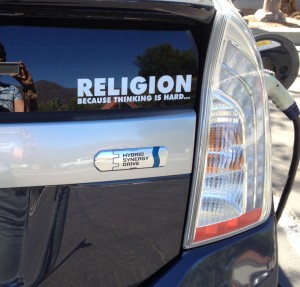 This bumper sticker made my blood boil.

The snootiness of it, the smug denigration, the car owner’s assumption that anyone who is religiously engaged and strives to have a relationship with…dare I use the G-word?…is intellectually vacant.

Maybe I was making a judgment call of my own.  Perhaps the car’s owner was acknowledging the opposite sentiment—those of us who engage with religion don’t check our intellect at the door. It takes a lot to believe in God—a lot of thought; a lot of living; a lot of faith, reading and struggle; a lot of conversation with like and unlike minded folks. But I’m likely giving credit where credit isn’t due. For this car’s owner, the meaning of the bumper sticker lay behind door number one. And it ticked me off.

Spiritual and religious journeys are as varied as the seekers on the path. I only know my own path, and believe me, my brain is mightily engaged every time I study the Torah, read rabbinic commentaries, and even pray. I’ve learned that when the words stay on the page they are one-dimensional, often puzzling, sometimes over the top.

Until they are experienced.

Last week I was speaking with a tiling buddy whom I met at Song & Spirit. Like me, she is Jewish. Like me she grew up in a non-kosher home, eating BLT’s, enjoying shrimp cocktails. Like me, over time she began to follow Torah’s mitzvot (commandments) as they pertain to the food we eat.

She told me about visiting a farm when she was a young adult. The farmer placed one of two baby goats born that morning into her arms and asked her to take the kid into the barn. “The mother goat followed me into the barn and when I put her kid down she began to nuzzle it. Then she stopped and began looking frantically for the other kid. Not until both babies were with her did she calm down. In that moment, I understood why Torah forbids us to seethe (boil) a kid in its mother’s milk.These animals are [sensate] creatures.”

My friend quit eating pork and shellfish. She began eating according to Jewish tradition. All because some arcane sentence in the Hebrew Bible came to life in a barn, and made her think.

Religion. Because thinking is hard.

Yes. I can imagine no better endorsement for religion. Because thinking is hard. If we don’t think, we dismiss one of God’s greatest gifts to us—our minds. And then, we run the risk of becoming as flat, mindless, and one-dimensional as a bumper sticker.

3 thoughts on “Religion: Because thinking is hard?”