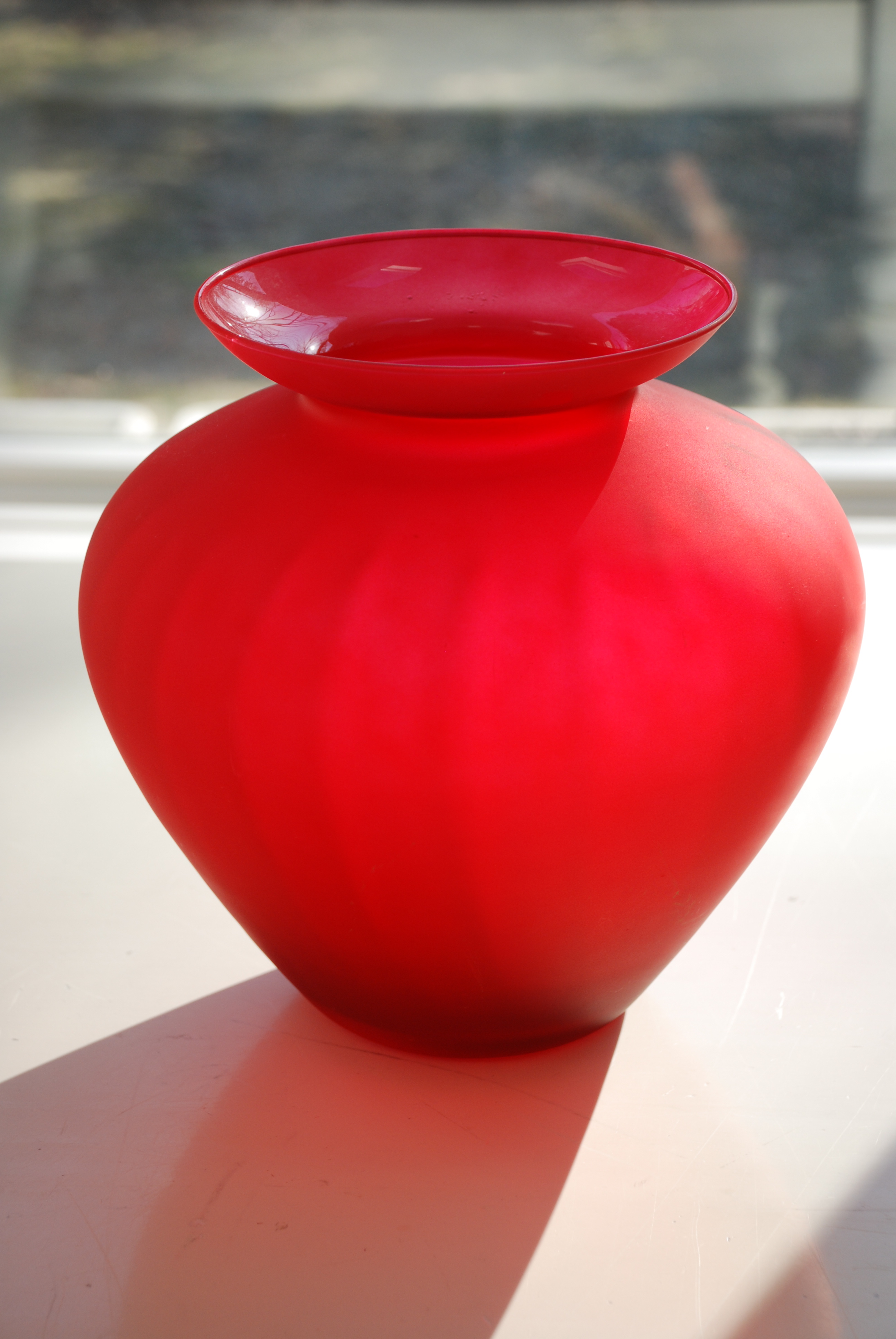 The  vase sat on the curb outside Elmore Leonard’s house  glowing like a ruby in the waning afternoon sun. Nestled amidst flattened cardboard boxes, recycled newspapers and a trash can or two, the vase was destined for the landfill, her sassy shape soon to be reduced to a handful or two of crimson shards.

My inner Pascal came to life and I plucked the vase from the dross. Nary a scratch on her surface; not a nick on her lip; the vase was perfect. Why had ol’ Elmore tossed her? Had he more vases than he could deal with? Did he hate the color red? Maybe the missus put it out.

I don’t know that I would’ve paid cold cash for the vase, but rescuing something so pretty from the trash delighted me. Home it came where it now sits on a table in the living room catching the morning sunlight and blazing to life for a few minutes each day.

The blue piece (it’s neither vase nor paperweight) we bought at an artfair, 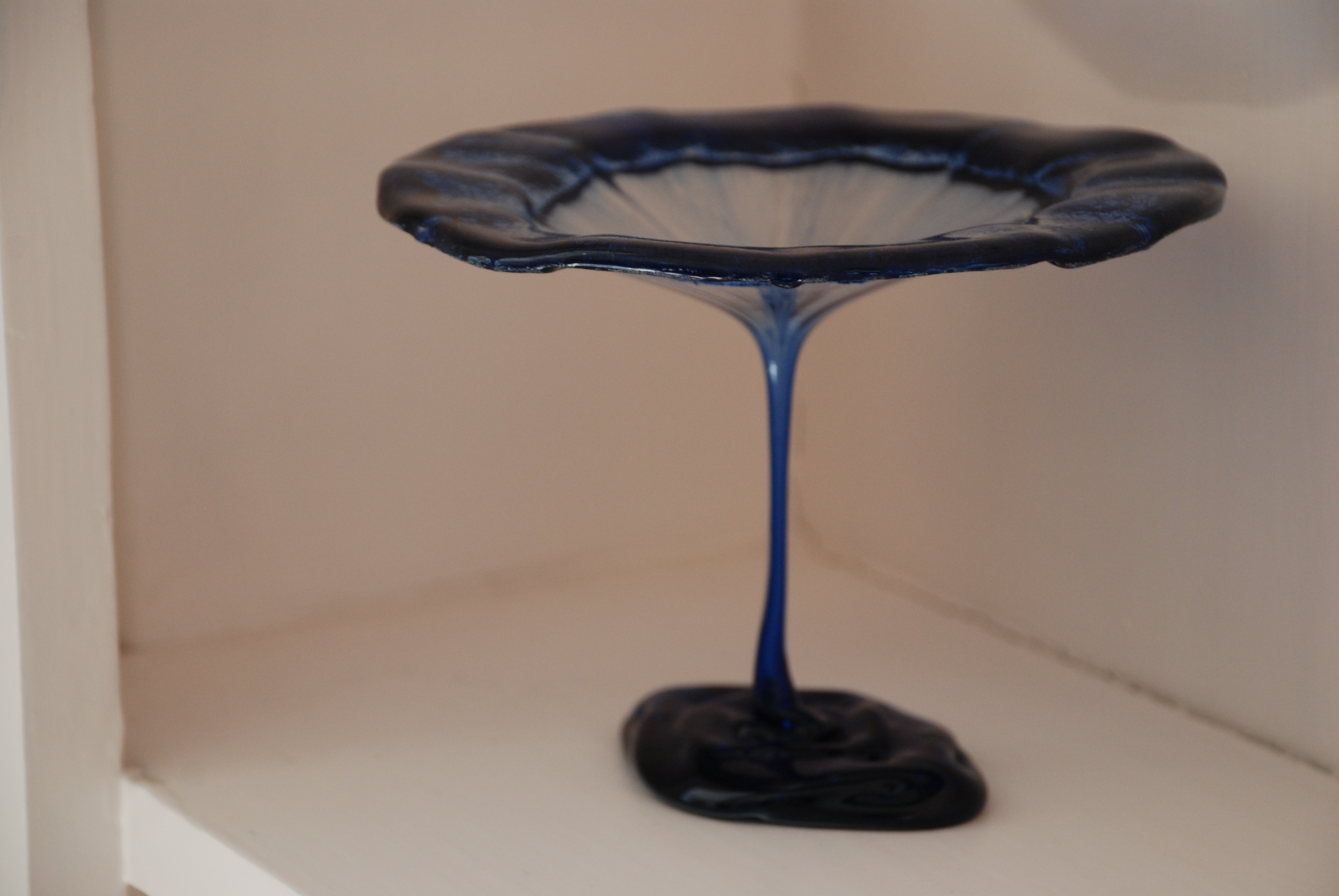 entranced by the seeming impossibility of its existence. How did the slender glass stem support that corona of cobalt? Had the artist pulled molten glass up from the puddle of deep blue? Or had she blown the delicate anemone-like cup and worked downward?

Neither, as it turns out. A friend who is a glass artist told me our art fair confection was actually a blunder of some sort. The artist was using a certain technique that went awry. Our cobalt glass bibelot wasn’t art at all but a vitreous blunder.  Were we suckers for having bought the artist’s boo-boo? Matters not a whit to me. I still think it’s cooler than cool.

One author’s trash is another’s treasure. Creative mistakes can be marketable. It’s all in the eye of the beholder.

Yesterday a green VW convertible pulled out of a driveway in front of me. I peered ahead. Gray hair, narrow face. Yep. Elmore. As in Leonard. The novelist. He lives on an adjacent block. We are separated by three houses. Occasionally we cross paths on early morning walks in the neighborhood. One year I noticed his signature five lines above mine on a petition at our local pharmacy. Then yesterday’s sighting. I followed him for a mile or so. (Banish the idea I was stalking him. We were simply on the same road, heading in the same direction.) He peeled off into the shopping center at the corner. A latte at Starbucks? Fruit at the new Kroger? A loaf of rye at Breadsmith?

I think about Elmore every now and then, imagine him writing away. Does his study overlook the front yard with its circular drive and the pillars around which twine magenta hibiscus? Or do his office windows overlook a grand sweep of backyard lawn and a pool?
“Dutch” Leonard has more than forty published novels on me. Right now I’m simply buoyed by some serious agent interest. His novels have been made into movies. My novel has too, if only in my mind.

Sometimes I drive by his house and wonder if Leonard sweats his dialogue, honing and rewriting until the repartee is sharp as a shiv? Or do those inimitable exchanges leave the nib of his pen fully formed? Are his characters leading him in circles or into fertile and entertaining territory? Does he ever look up from his legal pad and wonder if he’ll ever write a sentence as good as his last?

Three houses, close to fifty novels, a handful of movies, dialogue that flies from the page in machine gun bursts. So much separates us. And yet on those occasions when my mind wanders to the novelist up the street I take heart. We’re both striving to get the words down, determined to tell the stories ricocheting around in our noggins. We’re both rooting around in our alternative universes, alert for the precise word or image to fire up our eventual readers. I send a nod of encouragement his way. He might be ahead of me but we’re nevertheless on the same road, heading in the same direction.

(P.S. On a totally unrelated subject. Some time this week readthespirit.com will post an essay of mine, written some years ago, linking polishing silver for the High Holidays and the polishing our souls. Some of you have likely read it before, some of you haven’t. Either way, the message endures. Hope you enjoy.)