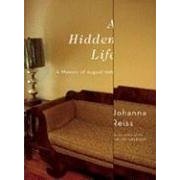 I‘ve always recoiled from the categories: “children’s Holocaust literature” and “Holocaust picture books.” Can’t we leave children alone? Can’t we allow them their innocence without putting our angst upon the heads of those whose skulls have just fused?

Johanna Reiss’ Upstairs Room has won every children’s book award imaginable: Newbery Honor Book, Library of Congress Children’s Books. ALA Notable Children’s Book, School Library Journal Best Book, New York Times, Outstanding Book of the Year, and Jane Addams Book Award Honor Book. I haven’t read it but who am I to argue with the ALA et al? Her book, at least is aimed and readers twelve and up and not those who still need their books read to them.

Ms. Reiss was in town promoting A Hidden Life: A Memoir of August 1969. Promoting seems too crass a word for such a lovely woman who laid bare adult heartbreak with such honesty and wry humor. In August 1969 Reiss had returned to Holland with her husband, Jim, and their two young daughters. The purpose of the trip was to visit with the Dutch couple who had hid Reiss and her sister in an upstairs room, the very room that inspired the award-winning book.

Reiss was on her way to literary stardom happily married, the mother of two lovely young girls. Jim left Holland a few days before his family’s projected return to New York City. In the middle of the night this young wife and mother was awakened to take a phone call from home. Sleep-laden, Reiss didn’t quite catch the point of her brother-in-law’s call. Assuming her husband had been in an accident, she told her brother-in-law, “Tell Jim I’m coming.” “Too late,” he replied. Johanna Reiss took off for New York, leaving her daughters behind with the very couple who had protected her and her sister so many years before. Of this time in her life, Johanna Reiss calls it her second Holocaust.

A Hidden Life is the author’s attempt to make sense of this second cataclysmic tragedy of her life. And page by page she does, discovering that her husband’s mother had been mentally ill. HIs siblings, she reported had,”no recollections of their childhood. None.” Young Jim was the one who kept the household running, the one who tried to bring stability to his mother’s troubled mind. This legacy imprinted upon him a mission to be a saviour. Speaking to us that morning, Reiss mused that upon seeing the tiny room in which she and her sister had been kept, tripped something in his psyche. He had been unable to save his beloved wife. An irrational thought of course. But by then, perhaps, her husband was beyond the rational world. “I think he had a rescue thing,” she mused. “He worked for companies that were always going under. And perhaps I didn’t need rescuing any longer.”

A tiny woman, Reiss told her larger-than-life story with pathos and humor. “I am not a Sad Sack,” she said. “I am positive. I love music and travel. I play stick ball in the park with my grandchildren.” She told us that as she came to the end of the memoir, she began writing more slowly. She understood that once the book was finished, so too would end the years of connection to her husband untangling his suicide had given her. “In the end, he hurt himself more than me. He never got to see his daughters’ weddings. Or their children.”

At some point during the morning’s talk, Johanna Reiss misspoke and referred to her husband’s suicide as “Jim’s Holocaust.” Freudians can do what they wish with that one. In one sense, in this situation, the two words are indeed interchangeable.