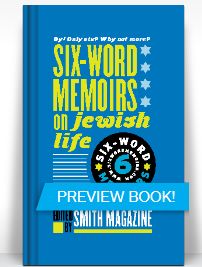 I guess it’s a sign of how busy things have been, that I never put the word out about my  entry in SMITH magazine’s  Six-Word Memoirs on Jewish Life.   For those of you not in the know, six-word memoirs supposedly have their origin in a six-word novel Hemingway was challenged to write in barroom bet. Here’s Hem’s hexograph of heartbreak: For Sale: Baby shoes. Never worn. Launched in 2006 by Larry Smith, the six-word concept has taken off  like all those superlatives — a rocket, a firestorm, hot cakes…

It’s a deceptively complex challenge to encapsulate a memory, joke, observation with not even a handful of words.  But narrowing something down to its essence, enables you to say volumes. The results can be fantastic. And funny. Poignant. And gut wrenching. Some of my favorites:

Seeing God’s face in your face. Rabbi Laura Geller
Everything with us is a question, why? Mark Rosenblum

Thanks for the blue eyes, Cossacks.Lisa Brown.

So go visit the site, or better yet, buy the book. Tears, wisdom, laughter. What a deal!

My submission: Living on LES. Zayde would plotz.*

* Translation: I’m renting an apartment on New York City’s Lower East Side. If Grandpa knew he would have a fit.

And OK, what about a six-word contest right here?
Quick! Six words on menopause.