It’s been a tumultuous roller coaster of a month. The bare bones short story is this: My mother died on March 9. Our son was married on March 22. So much has happened in the four weeks since her death that I cannot even begin to process it all. I have simply experienced whatever the day called from me to experience: grief, relief, joy, pride, exultation, exhaustion.

I have written nothing save my mother’s eulogy and an address I gave to my son and future daughter-in-law at the Shabbat dinner of their wedding weekend. So here, I offer up a few impressions, a first attempt to make sense of living through two of life’s most portentous passages, one on top of the other. 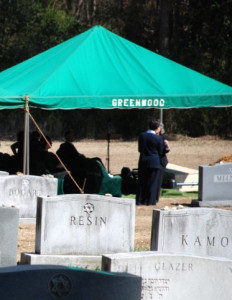 The sounds of burial—Anyone who has been to a Jewish funeral recognizes the tableau: the coffin, spare and constructed of pine, has not yet been lowered into the ground but is suspended above the grave, cradled by thick bands of webbing. There is the mound of excavated earth piled high beside the suspended coffin. It is haphazardly covered with a green plastic tarp that does nothing to hide its role. There is the shovel wedged into the dirt, concave side out. There is the tension of knowing what will come once eulogies have been read and psalms recited. Then there is the mechanical sound of the winch as the coffin is lowered into the grave; the mourners rise and one by one take up the shovel and pitch earth over the coffin. The first sound is the worst. Earth hits coffin lid with a fist-to-the-heart thud that no one forgets, no one wants to remember or ever hear again. But we do.

Jewish tradition requires us to bury our dead ourselves. It is considered the highest chesed, or kindness, because the deceased cannot thank us. Each shovelful of dirt is scooped upon the wrong side of the shovel blade to symbolize how upside down life has become with the passing of a loved one. We do not hand the shovel to the next person in line, but instead dig it back into the earth for him to take up. It should not be made convenient; we do not want to show eagerness as we go about this most devastating act.

Most of those who had taken their turn were milling about, goodbyes were being said. I walked back to my mother’s gravesite and took up the shovel again. As I worked, and the earth was returned to its home, the sounds changed. Earth fell upon earth with a whispering sound, comforting even. There was a rustling that made me think of silken skirts or the hypnotic sound the edge of my sister’s blankie made when she passed its satin binding against her upper lip over and over again as she sucked her thumb. My son came up and said he would take over. But I could not bear the sight of him doing this alone and told him so.  “Neither can I,” he replied. And so we buried my mother, his grandmother, together. The sounds of the earth quieted to a comforting shushing like the sound of a hand smoothing a blanket over the feet of a child just tucked in for the night.

Three wedding sounds—the stomping of the glass, the cries of Mazel Tov! and then clapping, clapping clapping. Too much here to share about Elliot’s wedding. How to encapsulate the joy, the sight of our son as he wept upon seeing his bride? Our joy at his choice of wife? Those three sounds linked us to generations of Jewish parents who have brought their children to the wedding canopy. Elation and gratitude filled me as I heard that quick succession of sounds, that still reverberate in my heart and soul.

Isolation and community—Jewish mourning is structured so that the mourner is not alone. We sit shiva, seven days during which we are not to leave our home, during which friends come and care for us, feed us, clean the dishes, tidy up the house. Visitors come and pay their respects, offer comfort, stumble through awkwardness of not knowing perhaps what to say or do. Each evening there is a prayer service during which the mourner rises and recites Kaddish. But because we had to go from my mother’s funeral (in Atlanta) right to California where we had planned on spending the week helping the kids the week or so before the wedding, my shiva was nothing like I had envisioned. My friends were some 2000 miles away. I was not at home, supported by the familiarity of my exterior landscape at a time of upheaval of my interior terrain. It felt like all of life was being lived  on the concave surface of a shovel.

Elliot put out the call and two dozen or so of his and Elizabeth’s friends, and nearly a dozen of Elizabeth’s family members came to their apartment to participate in a prayer service. I was so very touched at how many young people showed up for Elliot’s mom, so touched that Elizabeth’s family, who would be my family just ten days hence, rallied ‘round me as well. I gave myself over to my son’s care and was so grateful. Ten Jews, twenty, thirty we were all there and though the voices might not have been familiar, the prayers, language, and melodies were. And so, I was at home.

Earthquake—as if I hadn’t had enough of the earth heaving up around me, we got treated to a 4.6 grinding of tectonic plates upon which LA is laughably built. The accompanying roar was terrifying. A whole lotta shakin’ goin’ on that I don’t want to experience any time soon. 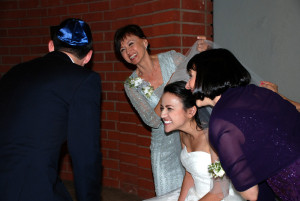 “Yep, that’s her!”—of our many wedding customs, one is the veiling of the bride. Elizabeth’s mom and I lifted her veil when Elliot was brought to her. This custom recalls, and prevents, the trickery the Biblical Jacob endured when his father-in-law gave to him in marriage the sister he wasn’t intending to wed. Elliot looked into Elizabeth’s eyes, laughed and said, “Yep, that’s her!” He veiled Elizabeth once again. More clapping, more joy. Oh were they beaming. We all were. 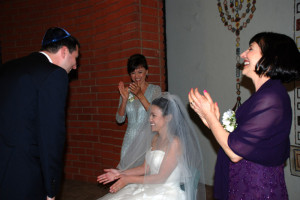 Mega thanks to Martin for his photos.

14 thoughts on “The Sounds of Grief and Joy”