IN THE SECOND HALF OF OCTOBER, our
ReadTheSpirit staff is regrouping for several projects we will launch
in the next few months. During these two weeks, we’re publishing a mix
of new articles and some earlier stories that are favorites with our
readers.
TODAY, we’re republishing part of a series we produced about a year ago on the spirituality of comic books and graphic novels. The most popular part of that series was this Tuesday Quiz on the religious lives of Superheroes.

This is Part 1. FOR THE REST OF THIS 3-PART SERIES on the creative explosion in spiritually themed Comics, click here: Part 2. Part 3. 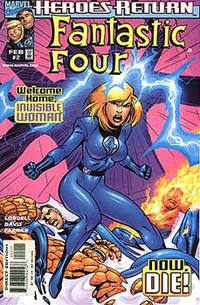 Today, we’re saluting a true media pioneer who is helping to Make the Comic World Safe for faith. He’s a Texas computer programmer, Preston Hunter, and a decade ago he created one of the Internet’s most popular hubs for religious data: Adherents-dot-com. This quiz is a special salute to the enormous amount of data he has collected on the religious affiliation of scores of comic book superheroes.

SERIOUSLY — a major cultural shift that’s showing up now even in the most popular comic books is a new openness to expressing characters’ spirituality. Hunter and other observers argue that this shift in comics reflects a larger shift in American culture.
What they’re finding in comic books, graphic novels and Japanese-influenced manga is yet another tip of the cultural iceberg documented from World Values Survey data by University of Michigan sociologist Wayne Baker in “America’s Crisis of Values“: As Americans, we’re overwhelmingly religious and increasingly we feel it’s our right to express ourselves about our faith.

Here’s today’s 10 Question SUPER Quiz:
INSTRUCTIONS: Match these Superheroes to the religious affiliations Hunter’s web site attributes to each one. When you think you’ve got all 10 matched up — click on the link at the
end — and the correct answers will pop up. If you’re a daily subscriber by
Email (you can sign up for free on the right-hand side of our site),
we’re sorry that you don’t get this Click-to-See-the-Answers feature in
your Email versions — so, please don’t read too far ahead today, if
you’re an email reader. 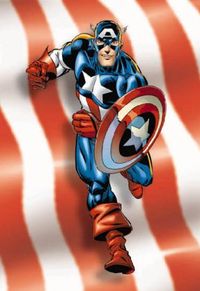 4.) The Thing, Ben Grimm, of the Fantastic Four

5.) The Invisible Girl, Susan Storm, of the Fantastic Four

10.) Hal Jordan, the most famous of the Green Lanterns

BONUS QUESTION: So, what’s Lois Lane? (No, she’s not included in any of the following 10 affiliations.) 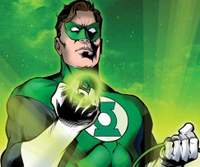 A.) Believes in God, but a Humanist with a strong scientific focus.

B.) Noted as quite a religious person — although not terribly active as an Episcopalian.

E.) Most likely Protestant, but pretty much inactive — although there’s a long-running debate over whether this character really is Jewish.

F.) Currently, the most famous Jewish character among super heroes.

G.) No question about it — grew up Methodist, but not really active as an adult.

H.) Catholic. And shown in a Catholic wedding to underscore the affiliation.

J.) Another mysterious affiliation. Debatable whether Episcopalian or Catholic. 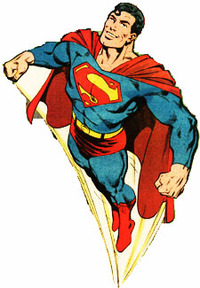 1.) Superman. G.
Preston Hunter points out that Clark Kent always was depicted as growing up in a solid, Midwestern, church-going, Protestant family — although an explicit reference to his youthful Methodism didn’t crop up in print until recent years. After his super powers fully developed, however, Clark felt uncomfortable attending Sunday services.

2.) Batman. J.
According to Hunter’s site, Bruce Wayne’s parents were from these two different denominations. Batman is increasingly depicted as an exceedingly dark and mysterious super hero — and certainly lapsed from any organized religious tradition.

3.) Mr. Fantastic. A.
Reed has said as much in Fantastic Four storylines. What’s more — in one mythic storyline — Mr. Fantastic actually meets God. In the movie version of The Fantastic Four, this is a somewhat striking culture clash of images, because Mr. Fantastic is portrayed by Welsh actor Ioan Gruffudd, who also starred in the movie “Amazing Grace” as William Wilberforce!

4.) The Thing, Ben Grimm. F.
If you’re not already familiar with the recent history of comic books — this is one of the astonishing tales. After decades in which writers downplayed serious religious themes in comics, the creators of the Fantastic Four’s storyline portrayed Ben Grimm as suddenly revealing a proud connection to his Jewish faith. In one key comic book issue, he prayed in Hebrew and spoke proudly of his religious heritage.

5.) The Invisible Girl, Susan Storm. B.
The Fantastic Four writers must be intrigued by this new openness to spirituality. It’s true: Although she doesn’t regularly attend services, the Invisible Girl is singled out in print as especially religious.

6.) Wonder Woman. C.
If you’ve read her comics, you know. This one isn’t much of a mystery, Hunter says.

7.) The Hulk, Bruce Banner. H.
Hunter’s site says there’s really no question about this affiliation. The clearest evidence is that Dr. Banner was married in a Catholic ceremony to a Catholic woman.

8.) Captain America. D.
Knowing the Captain’s longstanding history as a cultural icon, going way back to the World War II era, it’s not surprising that he was portrayed this way, Hunter suggests. If you haven’t noticed this, though, Captain America is back in a big way since 9/11 — and he famously defends religious diversity now!

9.) The Flash. E.
The speedy super hero seems to be Protestant, Hunter’s site says, although religion plays little role in his life, apparently. But, among comic fans, there’s a famous storyline in which someone wishes him a “Happy Channukah,” spelled just that way.

10.) Hal Jordan as Green Lantern. I.
He’s a toss up religiously, Hunter’s site suggests. Like a lot of comic characters, the few tantalizing clues about his spiritual affiliation have evolved over the years. That’s not even mentioning the fact that, down through comic history, there have been more than one Green Lantern.

BONUS: Lois Lane is Catholic, although she may not be a Catholic in good standing with the church. Hunter’s site nails this down in several fascinating ways. Apparently, an earlier writer of Lois Lane comic books — a popular series devoted to her own adventures — makes a point of saying that Catholicism was an intentional part of Lois’ back story, even though it wasn’t explicitly a part of the comics for years. Hunter’s site picks up other evidence, as well.