Here’s a provocative idea: What if the heroes of “Star Trek,” starting way back in the 1960s were the original “Nones”?
What are “Nones”? Well, jump back and read our report on “10 Secrets” of the massive new Pew study on religious life in America. The main headline of the Pew report is confirmation that the fastest growing population in America is made up of men and women who answer a question about their religious affiliation with—”None.” If you’re a person of deep faith, don’t worry. The vast majority of Americans still salute the traditional religious affiliations and church attendance is not slipping. In fact, Americans are overwhelmingly spiritual. Go back and read our overview of the data.
BUT tens of millions of Americans—a significant minority—don’t feel any anxiety anymore about saying they don’t adhere to a specific religious group at the moment. In fact, millions of people are willing to take their own spiritual quest in their hands without giving it any kind of specific name, these days.
This week, we’re helping you prepare for the newest “Star Trek” movie this weekend—an “origins” story that could restart the entire franchise. Along the way, this insight about “Nones” popped to the surface in a Conversation With Gabriel Mckee, author of, “The Gospel According to Science Fiction: From the Twilight Zone to the Final Frontier.”

You can buy a copy of his book via the Amazon link with our story today. You also can visit his Web site to read more of his own wide-ranging analysis of sci-fi-spiritual connections.

So far, Gabriel’s own writing is not specifically connecting the Star Trek influence with today’s millions of “Nones”—but the idea makes a lot of sense and we welcome all of our readers to tell us what they think about it.
The idea isn’t crazy. For example, social historians argue that the influence of Davy Crockett in the mid 1950s shaped the back-to-nature movement of Baby Boomers in the late 1960s and early 1970s. For a while, young men and women even dressed a bit like Davy.
Why not a similar influence from Star Trek?
Gabriel does argue that there is a distinctively brave and optimistic core that runs throughout the Star Trek franchise, guided by Gene Roddenberry (jump back and read Monday’s story that includes a fascinating statement by Roddenberry). Star Trek’s fearless pursuit of the basic meaning of life—and the show’s many optimistic answers—are a basic part of its enduring charm with viewers. This upbeat theme ran on for so long, in fact, that Gabriel says it actually sparked a backlash. The show’s hopeful optimism fueled the frightening and pessimistic responses of later TV series like the recent Battlestar Galactica, Gabriel argues.
Maybe in the end, Gene Roddenberry influenced millions with his distinctive style of optimism as well. He was famously an agnostic and a philosophical seeker of human values.
“Gene Roddenberry had the central vision for the show,” Gabriel said in a telephone conversation this week. “There aren’t many shows on TV where you can talk about a creator with a single vision guiding it. A lot of shows are thrown together by a bunch of executives. But with Star Trek there was Roddenberry and he was ultimately in charge of everything. The show was one man’s vision of what the future should be.” What does that future look like? “The Gene Roddenberry vision is a utopian vision,” Gabriel said. “It’s a very positive, optimistic view of the future. Battlestar Galactica is the flip side of that vision where terrible things happen to the characters in that series.”
Is “agnostic” the right way to describe Roddenberry? Gabriel thinks so.
“There are a lot of layers to that question,” he said. “You’ll often hear people say that Gene Roddenberry was an atheist. Any time that a god appears in Star Trek it’s usually a bad god or a fake god. But the answer is more complicated than that. He really was an agnostic. I think it’s rewriting history to say he was an atheist.
“In fact, what he said in interviews was more like, ‘I believe God is in humankind.’ That’s a far cry from saying, ‘I don’t think God exists.’
“And if you understand that about his approach to the question of God, then you can see that he really was interested in something much more complicated.”
What Gabriel is saying makes a lot of sense to me and it helps to explain why the series has remained popular for so many years. The two sophisticated themes Star Trek keeps exploring in relation to God are: opposing idolatry and supporting the principle that humans should be able to vigorously question God. “I think this is best symbolized by the film Star Trek V: The Final Frontier, which is the one where they actually wind up going to look for a planet where there is a creature that calls itself God,” Gabriel said. “Then, they find that this thing that claims to be God is evil and it demands the Enterprise be given to him as his chariot.”
In Gabriel’s book you can read a section of dialogue between Kirk and “God” from the film. Here are a few lines:

As it turns out, Kirk’s brave questioning leads to the smashing of this idol—a pretender to divinity. Even beyond this particular run-in with a fake god, Gabriel writes in his book that, throughout the series, “Kirk wishes to speak with God as Abraham did when he bargained for the lives of Sodom and Gomorrah in Genesis 18:23-25 … Star Trek V argues for a God that can be challenge and questioned.”
In our conversation this week, Gabriel expanded on the point and said, “We’re talking about the ability of humans to skeptically interact with God, to confront God, to demand the right to be heard—regardless of how incomprehensible the answer might be.”
In the end, “that’s the kind of thing Star Trek wants to do. It’s unafraid to pose a challenge.”

Is this sounding a lot like the Godfather of the Nones?
“Star Trek wants us to claim the right to challenge God—and all the extremely powerful entities in the universe, including those that claim to be gods,” Gabriel said. “We are called to fearlessly face the great powers whether they are alien—or otherwise.” 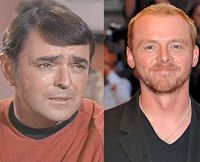