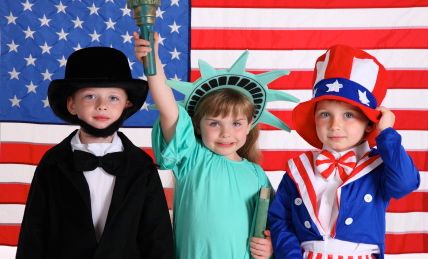 We want you to have a terrific Fourth of July weekend!
And, we’ve got great ideas to share!
(NOTE: If you’re reading this via Email or RSS feed, click here to jump to our page online—so you can see the animated Amazon carousel below.)

FIRST IDEA: TOP 10 MOVIES
FOR A FOURTH OF JULY CELEBRATION OF AMERICA

Every year, writers recommend “Top 10 July 4 Movies”—and Hollywood hauls out at least one blockbuster. This year, Hollywood gives us “Public Enemies,” a violent thriller about bank robber John Dillinger. I’m a big fan of Johnny Depp but I previewed “Public Enemies“—and it’s a dark and violent action movie that doesn’t say much about America, except that crime in the ’30s was bloody. SO, Here’s Our Fourth of July Top 10 List of movies you’ll enjoy! And each film reveals a facet of what makes America a truly great nation. (You should see an animated carousel of DVD covers, above; click on a cover to jump to Amazon and order a copy.)

1.) “Yankee Doodle Dandy”—Let’s start with a feel-good musical, starring James Cagney, that’s on everyone’s top-10 list. We can agree on some things, can’t we?
2.) “Young Mr. Lincon”—Other lists recommend “Mr. Smith Goes to Washington,” which stars James Stewart and also is a gem, but this newly restored classic with Henry Fonda playing Abe Lincoln should be required viewing for all Americans.
3.) “Glory”—Yes, it’s a war movie and July 4 lists always include war movies, but this one is about black soldiers in the Civil War. Deeply moving.
4.) “To Kill a Mockingbird”—Trying to remember what makes America truly great? You’ve got to recall the image of Gregory Peck all alone, guarding a jailhouse from a mob bent on mayhem.
5.) “Come See the Paradise”—Sometimes Americans weren’t as noble and clear-eyed as Mr. Finch, the brave lawyer in “Mockingbird.” This drama about Japanese internment in World War II was recently made available on DVD. See it.
6.) “Saving Private Ryan”—You may have seen this WWII drama already. If not, don’t wait any longer. Tom Hanks stars and, although the opening sequence of D-Day is hard to watch, this is a great story about our shared history.
7.) “A League of Their Own”—Getting too somber? Well, you’ll love this story about women’s baseball leagues. Co-stars Tom Hanks and Geena Davis. Lots of fun.
8.) “The Right Stuff”—Our spirits still are rising! If you’ve missed this great (and sometimes funny) adventure about our first American crop of astronauts—sit back and enjoy. The cast is an ensemble of top actors, including Sam Shepard, Ed Harris, Dennis Quaid and Fred Ward.
9.) “Gran Torino”—If the phrase “The Right Stuff” hadn’t been taken already, this Clint Eastwood film would have fit the title perfectly. This is an absolutely remarkable film about overcoming bigotry and the temptation toward violence.
10.) “The Music Man”—Let’s end on a high note! Sure, this is on everybody’s top-10 July 4 movie lists, but then—as I’ve said—we can agree on some things as Americans. 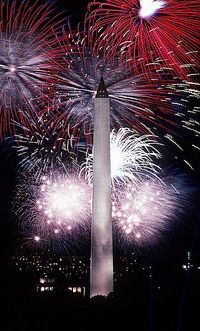 How about some July 4 trivia to share around the barbecue? Did you know that …

The American colonies officially separated from Great Britain on July
2, but it wasn’t until two days later that Congress approved the
Declaration of Independence. Contrary to popular belief, the
Declaration of Independence wasn’t signed on July 4: In truth, many
delegates signed on August 2.
Annual imports of fireworks to the U.S. total $217 million, the majority of which are for Independence Day.
Your chances are one in four that a hot dog consumed on July 4 is from Iowa. 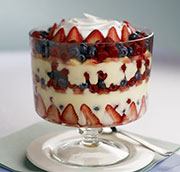 Got a taste for food facts related to American independence? Check out this site with a recipe for George Washington-style cranberry pudding.
And here’s a parenting tip: Red-white-and-blue ice cubes are easy and inexpensive! Thanks to Disney, here’s how to make ’em!
Adults who want a more “grown-up” recipe might enjoy this red-white-and-blue trifle.

Have you ever read the Declaration of Independence? If not, take some time to give it a read-through and learn more about U.S. history, courtesy of our federal archives.
To get more of a historical perspective, read
a letter from John Adams to Abigail Adams that describes the first
anniversary of American Independence (courtesy of the Library of
Congress). 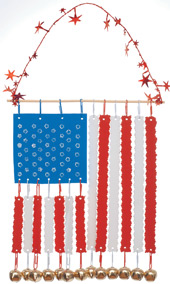 Making music has long been a part of American history. We’ve got lots of patriotic songs in addition to our national anthem. Kids can learn to make their own music with these flag wind chimes.

Want fireworks from the comfort of an easy chair?
When the day winds down and the sky gets dark, tune in to the enormous
fireworks display in Boston, which is broadcast nationwide. More information can be found right here.