This week, we’re exploring the history-changing force of faith.

Monday, we celebrated the creators of Gumby, Davey and Goliath and
“Catcher in the Rye,” both of whom died in January and left a diverse
spiritual legacy. TODAY, we join with millions of veterans in remembering the Four Chaplains who perished in World War II. The anniversary is Wednesday—and we’ll explain more about memorials toward the end of today’s story. But, first we want to reacquaint you with this inspiring chapter in interfaith history!
We heartily recommend Dan Kurzman’s 2005 book, “No Greater Glory: The Four Immortal Chaplains and the Sinking of the Dorchester in World War II. Here’s a link to order a copy of Kurzman’s book from Amazon, if you’d like to read the whole thing.

The four men were U.S. Army chaplains—two Protestant, one Catholic and one Jewish. They perished aboard the rapidly sinking U.S. Army Transport Dorchester, torpedoed by German forces during WWII. This was one of the most heart-felt losses in the war for many Americans. Only 230 of the 904 people on board the ship were saved.
After the ship was hit, the four chaplains managed to reach the deck quickly and worked
to calm the frenzied soldiers as they passed out the available life vests. However,
the ship sank quickly, the stock of life vests ran out—and the four
chaplains handed over their own vests to save lives. They were last
seen on the rolling and sinking ship, praying in their individual traditions. What makes Kurzman’s book a page turner is that he injects life back into the men on this tragic ship, including the chaplains themselves. Most Americans barely know the four heroes, except perhaps a fleeting image of their faces depicted in the clouds above the sinking Army Transport Dorchester (shown, right, in a photo taken while docking).
Kurzman’s account draws on survivors’ vivid memories. Often, the faith orientation of the individual chaplain didn’t matter much during the war—soldiers simply were
reassured by their presence, the veteran Michael Warish recalls. “Guys
would line up to talk to them. We had a lot of young guys, and a lot of
them had never been away from home before. The chaplains were like
mother and father to them.”
Here’s how Kurzman captures the four men in a brief, prose snapshot:

“Each chaplain had his own distinct persona. George Fox, the
medal-winning hero of World War I, exuded a senior authority without
trying to impose his will on anyone. Alexander Goode, the idealistic
intellectual, carefully filtered his vast knowledge to others without
patronizing them. John Washington, the sharp-witted street fighter,
never tired of displaying his Irish talent for finding an intriguing
story in virtually every event in his life. And Clark Poling, the
sensitive poet and the only one of the four from a prosperous,
well-known family, withdrew into anonymity as he sought with his
fathomless curiosity to search the soul of anyone who came to him, to
better understand the man’s problems.” 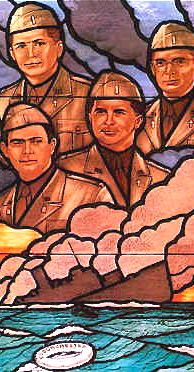 These were tough, pragmatic clergymen. Here’s an example:
“The chaplains also helped one another out when they could. One
Friday night, Rabbi Goode wanted to hold Sabbath services in a room
near the kitchen, but he was competing with a cook, who wished to use
that room for a crap game. While Alex was arguing with him, Clark
Poling appeared and was as outraged as Alex by the cook’s
intransigence. Clark helped the rabbi persuade the cook to hold off on
the game, and Alex was soon handing out small Bibles. The argument that
prayer was more important than shooting dice had finally triumphed.”
Kurtzman’s book is gripping. The final pages are unforgettable. In one scene, Rabbi Goode is trying to save a man, who is about to jump into
the water, but the rabbi realizes that this soldier has an injured arm.
So, before he releases the man, the rabbi removes the laces from his
own boots to tie the man’s arm securely in place within his life vest.
The rabbi knows he won’t be needing his own boots much longer.
The life vests run out. The chaplains pray in several languages—English, Latin and Hebrew.
The ship begins to roll.

A man on a life raft describes the final scene: “When (the ship) rolled
over … that’s when I saw the four chaplains, (who) had climbed up on
the keel, and they were standing arm in arm. … And then …”
Well, we know what happened next.

IF YOU’D LIKE TO FIND A MEMORIAL, this year, here’s an important tip: Check with local veterans’ groups in
your part of the country. Various veterans’ groups—and churches with
veterans among their members—do hold annual memorial servies. In fact,
interfaith calendars list a Four Chaplains Sunday as February 7 this
year. However, news reports indicate that some groups and parishes
already remembered the four on Sunday, January 31. Others will gather
on February 3, the actual anniversary of the 1943 event. So, check with
local groups if you care to observe the date. This Wikipedia page tells the whole story and lists some of the key memorial sites across the country.

If this story moves you—and it certainly stirs most of us—then you
might make a special effort this week to think of the thousands of
chaplains currently serving Americans. Where can you find out more?
This portal for the U.S. Armed Forces Chaplains Board
provides links to other resources, including the key Department of
Defense directive about “accommodation of religious practices” and the
Web sites of other chaplaincy organizations. There are individual pages
for groups like the Army Chaplaincy Corps. Here’s a link to ChaplainCare, an official U.S. Navy Web site related to the Navy.