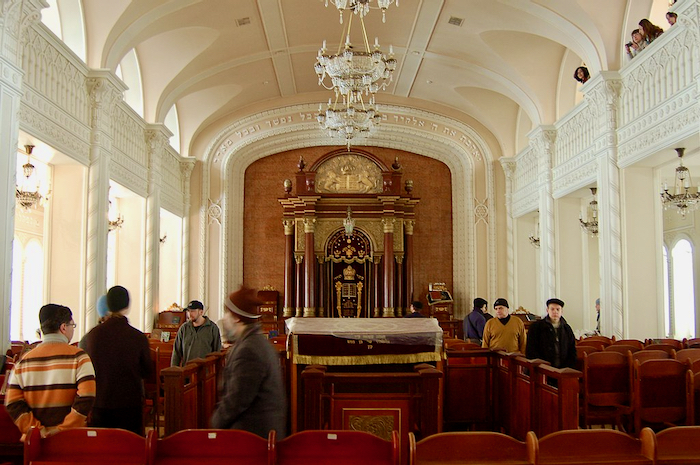 ENDANGERED HOLY SITES IN UKRAINE—So far, Russian bombardment has not damaged the landmark Brodsky Synagogue in Kyiv. In 1898, government officials and leading citizens of the region, most of whom were Christian, helped the Jewish community of Kyiv celebrate the opening of this new synagogue. Then—three decades later under Soviet attempts to wipe out religious communities—the building was turned into a school, a military facility and later a puppet theater. Many of the building’s religious ornaments were removed in the Soviet attempt to erase its original purpose. After the collapse of the USSR, the Jewish community reclaimed the building in the early 1990s, starting with a celebration of Hanukkah. (Note: This photo of the Brodsky Synagogue by “Thez” can be shared via Wikimedia Commons. You’ll find more photos below.)

‘The most widely celebrated Jewish holiday’

This photograph of a seder plate can be shared via Wikimedia Commons.

Some people love the familiarity of repeated rituals, each detail remembered from years’ past. Others prefer innovation: Make it new! Make it different!

But each year’s Seder provides an opportunity to connect history with current events. Recently, I’ve conducted Seders that highlighted the growing presence of diverse sexualities and family constellations within our community. Decades ago, I conducted Seders that focused on Soviet Jews who were forbidden to emigrate to Israel. Those were called “Let My People Go” Seders.

I have been part of many women’s Seders that draw attention to the under-acknowledged women that make Jewish holidays, nay—Jewish life—possible. A Miriam’s Cup stands alongside the traditional Elijah’s Cup. An orange, representing the inclusion of all heretofore absent or underserved participants, finds a place on the Seder plate.

‘This year … thinking of Ukraine …’

This year, I will place a Ukrainian flag on the Seder plate. It’s a statement of solidarity with a people in desperate straits.

It will be impossible to begin the Seder meal with the words, “Let all who are hungry, come and eat,” without thinking of those citizens in Ukraine’s bombed-out cities who have limited or no access to food or water. This year, it will be impossible to read the paragraph about how the Israelites fled in the middle of the night so as to evade Pharaoh’s armies, without thinking of the traumatized women and children and elderly who await a lull in the shelling to make their way to a bus to take them (with nothing but their clothes and small carry-bags), to a place where they can breathe and sleep and sob.

This year, as we take drops of wine out of the ceremonial cup to indicate the sweetness of our celebration is marred by the destruction that took place in order for freedom to be realized, I will take out extra drops in recognition of the Russian soldiers who were unaware of the war they would be fighting, and who, perhaps, want no part of it.

This year, the World Union for Progressive Judaism sent out a special appeal: “The World Union is urging its 1.8 million members around the globe to add a beetroot to their Seder plate this Passover to show solidarity with the people of Ukraine. Ukraine’s most famous national food is borscht, for which the main ingredient is beetroot—making this a symbolic way to express support during the festival.”

Early in the Seder, we break a piece of matzah. A very crisp cracker/flatbread, it makes a sharp sound when it’s broken. Each year, this sound draws my attention to the brokenness in the world. This year, that brokenness is located in a country whose blue and yellow flag has come to symbolize courage and freedom.

Many families sing “Dayenu,” which begins with the word, “Ilu.” “Ilu” means “if only.”

If only nations beat the swords into plowshares and their spears into pruning hooks.

If only countries could decide for themselves what kind of government they want.

If only, even in war, soldiers didn’t kill civilians, didn’t bomb hospitals and schools, didn’t plunder and rape and needlessly destroy.

This sentence introduces the recitation part of the Haggadah (the Seder book or telling): “Anyone who grows the telling of the Exodus story, behold, they are praiseworthy.” I understand this as encouragement to expand our awareness of Passover to include the rejection of all tyrants and the perpetual pursuit of freedom.

The Seder closes with “Next year in Jerusalem.”

“Jerusalem,” (“Yerushalayim” in Hebrew) contains the word for peace, “shalom.”

So, it is fitting to end this year’s Seder with “Next year in Jerusalem,” and I will add, “in Kiev, too.” 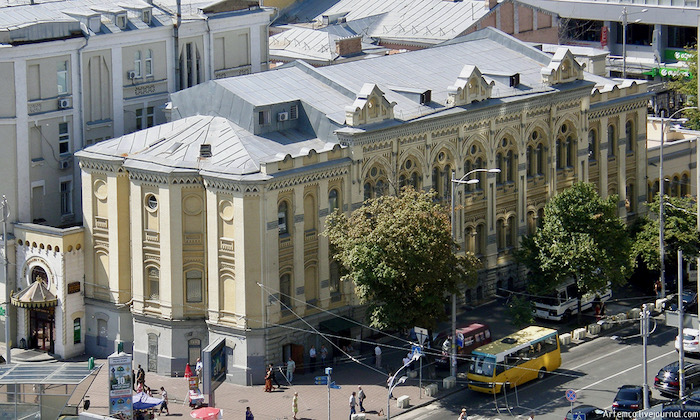 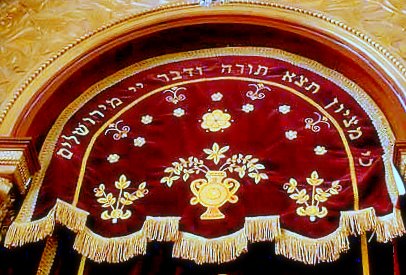 Screen over the ark at the Brodsky Synagogue in Ukraine.

And for more on Rabbi Lenore Bohm … 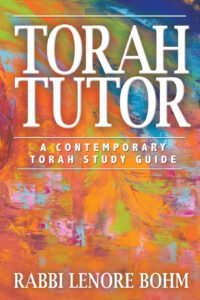 VISIT RABBI LENORE’S RESOURCE PAGE: Go to TorahTutorBook.com to find more information about her ongoing work and her new book.

Order a copy of her new book from Amazon.

When is Passover? The date moves each year with lunar cycles. This year, it begins after sunset on Friday, April 15.