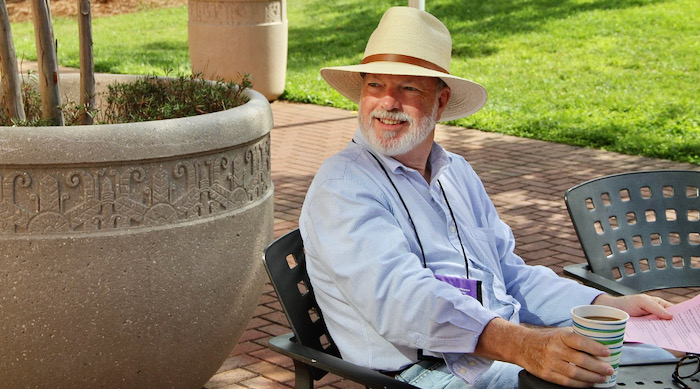 J. Brent Bill on ‘Hope and Witness in Dangerous Times’

His Prophetic Voice Echoes in Many Ways Right Now 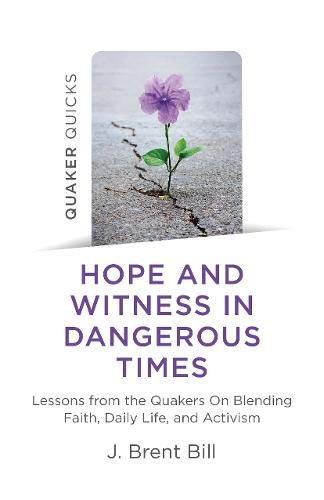 Three times this week, I was warned that would-be peacemakers need to become “dangerous.” The first warning came from psychologist Dr. Robert J. Wicks’ wise and wonderful book from 2012, Riding the Dragon: 10 Lessons for Inner Strength in Challenging Times, a book that I was rereading to discuss with one of our authors, Howard Brown.

Then, the second warning was from Quaker writer J. Brent Bill’s brand new Hope and Witness in Dangerous Times: Lessons From the Quakers On Blending Faith, Daily Life, and Activism, a copy of which Bill graciously mailed to our offices. It’s an inexpensive new 72-page booklet within an ongoing series. Bill’s volume is so new, in fact, that it is not yet listed in the Amazon Quaker Quicks index page, as of this week.

The third warning came from my sister, Shauna Weil, a musician, writer and partner in one of Michigan’s historic family-owned dairy farms. Each summer, the Weil family opens one of the most popular sweetcorn stands in mid-Michigan under a large tent. To be clear, Shauna never used the exact word “dangerous” in her telephone call, but that clearly was the context. She rang my cell phone to ask for help in editing one of the occasional inspirational columns she writes, because she was concerned about the dangers of including two real children in a column about racism. You can read her column for yourself here. As we talked, we resolved her concerns by making sure she consulted with parents, who approved publishing the story, and she also did not specifically name the two minors to protect them from backlash.

I realized, after these experiences, that my daily work as an editor amounts to what Wicks refers to as “a dangerous listener.” That’s especially true because—every week as editor of ReadTheSpirit magazine—I am engaged in talking and working with writers who are what J. Brent Bill calls “dangerous people.”

What makes us so dangerous in all three instances I am describing?

We are daring to reach out in a turbulent world to foster meaningful, hospitable, uplifting relationships with other people—daring to accept all of the risks and responsibilities of that messy and unpredictable process.

Why do we take that risk? Why are we willing to become dangerous?

Because, as all three of my mentors this week point out, we are attempting something that is radically countercultural: We are opening our hearts to people around us because we truly care about them. We love them in the way Jesus used the term “love”—as much as we love ourselves.

In Robert J. Wicks’ book, he puts it this way:

As Phil Cousineau, in his book The Art of Pilgrimage, rightly recognizes, “Listening closely is nearly a lost art, but a retrievable one. The soul thrives on it. … Words heard by chance have been known to change lives. … Listen as though your life depends on it. It does.” Listening closely, listening dangerously, listening as though our lives depend on it, means listening from the heart. When we seek to listen from the heart we recognize that we are not free in so many, many ways in our lives.

You might want to read Wicks’ words a second time. He’s describing an astonishing process, if we can make this kind of ‘dangerous’ connection of two lives in truth and selfless humility. And, then, consider the exponential power of that? Think of the spiritual energy we generate as a fully engaged community of two, or three, or four, or—? This journey always will be surprising and, as Wicks’ points out—beyond our individual ability to control! That’s when we become truly dangerous agents for transforming the world.

Don’t take my word for it. Read the words of Wicks or Bill—or my sister—and you will find them all daring us to take this step toward caring for someone else so fully that we see them “through new eyes,” as my sister writes. When we do, we feel a mysterious unsettling of our hearts and minds. We can’t control that movement. In reaching out as a “dangerous listener,” we have let go of some of our own controls and boundaries.

We can feel the danger.

As J. Brent Bill puts it in his new book:

All of us are invited into a holistic life. As the early Quaker William Penn said, “True godliness doesn’t turn us out of the world, but enables us to live better in it, and excites our endeavors to mend it… Christians should keep the helm and guide the vessel to its port; not meanly steal out at the stern of the world and leave those that are in it without a pilot to be driven by the fury of evil times upon the rock or sand of ruin.”

I invite you to consider how your personal faith life better enables you to live in these dangerous times and how it moves you to work at mending the world. How do your spiritual beliefs empower you to help guide the vessel of the world and its people into a good and safe direction? …

Quakers have endeavored to live such lives—and we don’t always get it right!—and what lessons they might have for us. In this book, we will examine what motivated them, how they’ve acted and continue to act, and how we decide what we’re called to do, what our spiritual work in this world is to be. For some of us it might be the grounding work of contemplation and prayer that supports the efforts of those on the front lines… For others it might be to become, in the words of the Quaker civil rights activist Bayard Rustin, “angelic troublemakers.”

For many of us, it may well be some combination that may not have occurred to us up until now. Regardless, we’ll explore how our faith is not just about the hereafter, but it’s also about here.

After all, if faith matters, it has to matter now!

GET THE BOOKS! Follow the Amazon links above to order Robert Wicks’ and J. Brent Bill’s books. Stay tuned to ReadTheSpirit magazine for news of an upcoming book by another “angelic troublemaker,” Howard Brown whose upcoming memoir is called Shining Brightly.

MEET BRENT BILL—Brent Bill is photographer, retreat leader, writing coach and teacher—and Quaker minister.  He’s written and co-written many books including Holy Silence: The Gift of Quaker Spirituality and Life Lessons from a Bad Quaker, in addition to more than 100 short stories and non-fiction articles.

Brent is now retired (except from writing–he always has a new project he’s working on). He lives on Ploughshares Farm, which is fifty acres of Indiana farmland that is being reclaimed for native hardwood forests and warm season prairie grasses. That’s where he spends most of his time, doing chores, rebuilding rail fences, and enjoying life.