“What you remember saves you.”
W.S. Merwin

St Stephen Martyr, Washington DC, here and above. Both photos by Martin Davis.

EDITOR’S NOTE—Journalist Martin Davis’s reflections on spiritual life appear each month in our online magazine and have drawn an inspiring wave of reader responses. Having worked in media for many years, Martin also is an innovator in how this national conversation can unfold. In his last column, he essentially crowdsourced a column by inviting four writers to comment on the same day we published his column, called Tomorrow Is No Longer About You … In this new column, Martin collaborates with Editor David Crumm in this reflection on the Call of Memory and the passing this spring of the poet W.S. Merwin. Please, enjoy this column and share it with friends to spark further reflection and conversation.

As the weather in Washington DC warms, I walk more.

One of my favorite strolls is from my office in Georgetown, up Pennsylvania Avenue to Connecticut and M, where I meet my carpool to ride home in the evenings. On the days the driver is late—or I’m early—I will sometimes stop along the way.

In this city of world-famous monuments, I visit a little-known touchstone of memory: a pew at St. Stephen the Martyr Catholic Church. Although I am no longer a member of any organized religion, I am drawn toward sacred spots.

St. Stephen beckons to anyone who passes—from its huge white monolith with a cross on top that towers over the surrounding buildings—to an eye-popping statue of St. Stephen, affixed to the church’s brick front. The saint was sculpted by Felix de Weldon, who also created the Iwo Jima statue at Arlington National Cemetery. 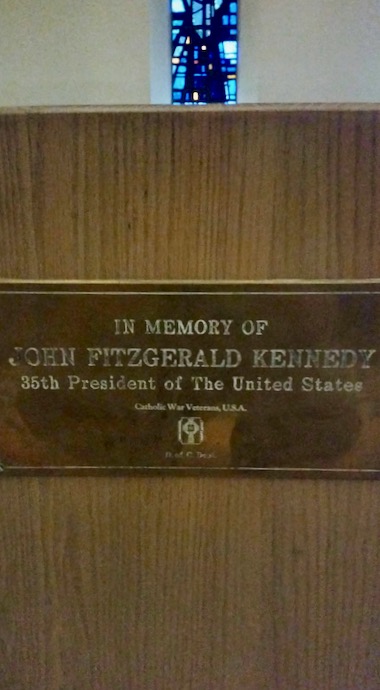 Which pew? It’s on the right-hand side of the church as you walk in, fourth from the back. A plate on the end of the wooden bench reads:

From this very pew, JFK and his family worshipped during the period Jackie described as Camelot. That the family worshipped there, and not at the more opulent and more prestigious St. Matthews Cathedral, which is closer to the White House, is a reminder that in some ways our world hasn’t changed all that much. The Secret Service couldn’t secure St. Matthews as easily, so the president went to St. Stephen the Martyr.

‘ALL TOO MORTAL’ MEMORIES

Most of us can’t sit in Kennedy’s chair that was in the Oval Office. Nor can we walk the colonnades outside the Rose Garden he so frequently strolled with his brother Bobby, the Attorney General. But anyone happening to walk along Pennsylvania Avenue can sit and worship, or meditate, or just think, in the very spot one of our most famous presidents once did.

We can sink into the cascade of memories that shaped our world in so many ways—Camelot and wars both Cold and in Vietnam, civil rights and moral conflict, the cult of celebrity and the catharsis of national mourning. All appropriate. After all, Kennedy—unlike the church’s namesake—was no saint.

He was all too mortal.

Certainly in his own day, there were many who questioned Kennedy’s piety on moral, theological, and political grounds. Of Kennedy’s faith, his close advisor Ted Sorensen, in Counselor: A Life at the Edge of History, wrote: “Was Kennedy a ‘good Catholic’? … Personally, I had no reason to question the sincerity of Kennedy’s religious observances, including his attendance at Mass every Sunday, even when I occasionally wondered whether there might have been an element of political necessity as well as personal piety motivating him. As to the balance between the two, no one but JFK could know, and he never said.”

In describing this experience to David, he reminded me that we recently lost our one-time Poet Laureate and Pulitzer Prize winner W.S. Merwin, who died at age 91 in his Hawaiian home. The New York Times editors regarded this as such a loss that they published two obituaries. One was a traditional “obit” describing his lifelong fascination with the natural world, Buddhism and the nature of love, loss and memory. 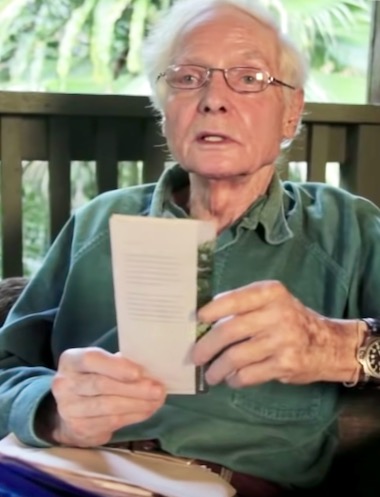 W.S. Merwin from the documentary Even though the World Is Burning, sitting on the porch of his Hawaiian home. (Click the photo visit the film’s Amazon page.)

The other was based on an interview just before his death. In that lengthy interview, Merwin surprised the reporter with an odd non sequitur.

Out of the blue, the poet asked: “Do you know what caused most deaths in Napoleon’s army?”

Caught off guard, the writer guessed that it might have been disease, perhaps cholera.

Merwin shook his head. No.

Then, he said one word: “Homesickness.”

David, correctly I think, sees Merwin as a “none” when it comes to religious affiliation. Most newspaper reports called him a Buddhist, and perhaps he was in his own way. The Los Angeles Times came closest to his lover’s quarrel with religion when it described him as “a post-Presbyterian Zen poet and channeler of ancient paradoxes.”

You can’t read far in Merwin’s many books of poetry without finding passages in which he is simply walking through the world—as both David and I like to do on warm spring afternoons—trying desperately to hang onto memories. All the while, he knows he can’t help but forget so much. We cling to memories even as so much is vanishing.

And so, as I walk through this city of great monuments on my homeward journey, I sometimes enjoy the substantial feel of that oaken pew in my palm as I grasp it, easing myself down to sit for a moment of reflection.

Surely there was something to the mystery of faith and our collective spiritual memory that drew Kennedy to that pew each Sunday. And surely he took with him each week something of the experience of transcendence to the White House.

CAN ANYONE WALL OFF OUR SPIRITS?

I’m telling you this story, because I have grown so weary with the endless headlines about divisions in organized religion and, worse yet, the politicization of churches in our escalating culture wars. Our houses of worship have become places where many not only feel unwelcome, but in many cases ostracized for their sexual identity or skin color. Instead of throwing their doors open to welcome the world’s diversity, churches continue to construct ever-higher barriers to admission.

In walking away from the institution of the church, I also tried to walk away from any notion that the buildings in which worship occurs are special or sacred. To the faithless, all the world is the same. And, for the most part, today’s religious leaders aren’t even talking about the possibility that the world is full of sacred spaces. They are more concerned with walling off their small patches of the divine and, in doing so, driving away those of us who find more solace in walking away.

Merwin certainly believed that. He loved to walk. He loved to sit. He sat in gardens. He sat on porches. He looked up at the stars. He listened to the rain. He watched birds.

In his final little book of poems—most of which he dictated to his wife, because he was losing his eyesight and couldn’t see well enough to write the words down himself—he composed a poem about this very process of wonderment and memory. He called it Voices over Water.

Merwin famously felt so strongly about propelling his visions into the world that he did not even stop to add punctuation. So, the poem begins:

Why do we do this? Why do we yearn to remember and recognize these fleeting spirits? Because they enlarge our lives and give them meaning, Merwin tells us. The poem eventually ends with this haunting line:

there are distant voices still hoping to find us

REMEMBERING HOW TO RECONNECT

This spring, once again, I walk past gardens. Sometimes, I sit in that old pew at St. Stephen.

Sitting there, I don’t feel Kennedy’s presence in any supernatural way. I simply find it awe-inspiring to sit in the very surroundings that the most powerful leader of the Free World once sat–not only as president, but as a human drawn to the same eternal mystery of faith as me.

My mind races with questions. Did the undulating ceiling give Kennedy the same sense of transparency between the earth and heavens that it gives me? Did the relative simplicity of the sanctuary bring him closer to the people around him, in the same way I feel connections with the homeless and less fortunate who also come to meditate?

Sitting there, I do not expect to answer those questions. I struggle to explain what is happening to me in those moments. David has a very good idea about what is transpiring. What I treasure, he says, is this convergence of memory and meditation on my own life—pulling me outward to reconnect with our world.

Perhaps that’s the definition of sacred space: Any area one occupies that brings us face-to-face with our fellow human beings.

Perhaps what I—and many others who have walked away from traditional religious affiliations—really need is a friendly space that allows us to remember.

To recognize our deeper and larger connections with our world.

To reconnect with those other than ourselves.

A church will do.

Or a simple wooden pew.

And, what do we hope to find there?

Why do we hope to reconnect and to remember?

Ultimately, we are hoping against all odds that

there are distant voices still hoping to find us 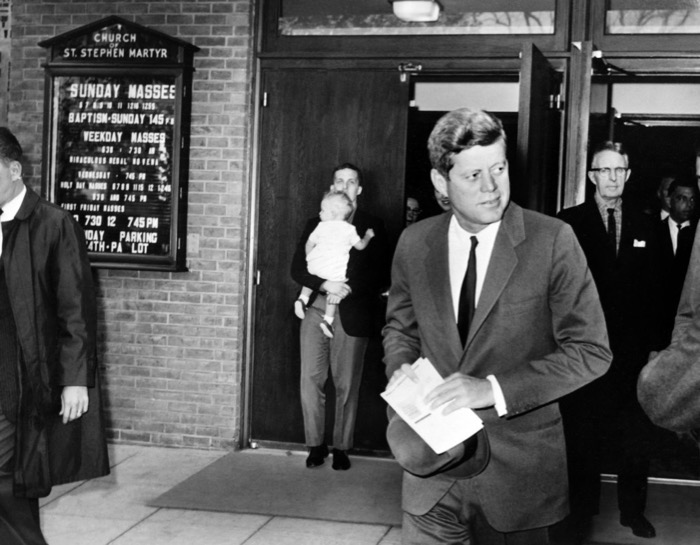