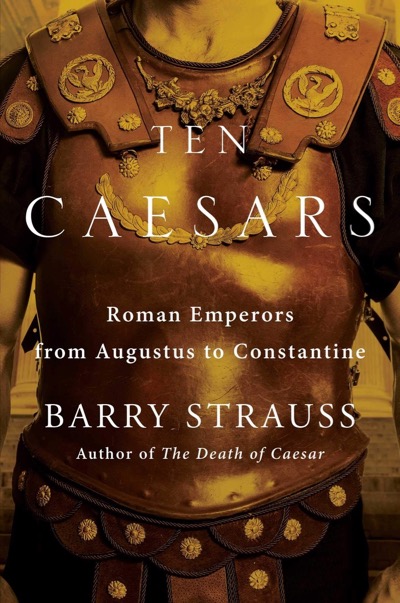 I’m a journalist in my 60s whose professional specialty is covering cultural diversity, books and films. I vividly remember the swords-and-sandals Hollywood epics of the mid 20th century and also the host of B-list movies that sprang from the ancient world in that era. In 2019, today’s Roman resurgence in popular media is a lot more graphic and also makes far more detailed historical claims.

As of this book’s March 5, 2019, release date—we’ve got The Smithsonian Channel airing the series, Eight Days that Made Rome, which features lots of historians and on-site footage. Amazon is streaming the fictional Britannia series. Netflix is streaming the blood-drenched dramatic series called simply Roman Empire. These days, no self-respecting cable service wants to be caught without a Roman series for its viewers. And I could go on and on, listing other cable services that routinely air shows about Rome from the Travel Channel to Discovery.

So, that’s my first point in this review: The emperors covered in this book pop up regularly in those popular TV shows—and in world news headlines on a daily basis. The day I am posting this review, The Times of India carries a headline comparing a controversial politician to Emperor Nero. The Australian Broadcasting Company has a news analysis of political assassinations today—comparing them with ancient Rome. And, also today, the UK Independent newspaper is telling readers in a headline: What should be done in the Middle East? Ask the Romans.

This book is timely! That may sound odd about a book covering events two millennia ago, but it’s true.

There’s another reason to welcome Barry Strauss’s new book—and that involves the millions of small groups that meet each week in congregations nationwide. These groups have all kinds of names, including Sunday School, or Bible Study, or Prayer Group, or Men’s Group. What they have in common are regular meetings and, often, these groups either discuss the Bible—or agree to read and discuss other books related Christianity. Those are millions of men and women with an ongoing interest in what happened in the Roman Empire, the era of the New Testament and the early church.

Then, is this book too shallow? My answer: No!

I’m a journalist who has reported from Rome on a number of occasions, so I already know a lot about these Caesars. I was curious to see how Strauss is summing up their lives—based on the state of historical research in 2019. So, I read his entire book in two evenings, thoroughly enjoying this refreshing tour of this tumultuous era.

If you consider Strauss’s own biography closely, then you know he’s a top scholar, based at Cornell. He could have devoted his career to peer-reviewed volumes read by a small handful of historians. Instead, over many years, Strauss has published great books with Simon and Schuster that are a pleasure for general readers. Personally, I’ve read and kept on my shelf his earlier books on The Trojan War and The Battle of Salamis. Curious about his sources? Want to go deeper into the research? There are 50 pages of end notes you could sift through at your leisure, if you are so inclined. But he doesn’t clutter every page with a cascade of these references. He lets us enjoy ourselves with the narrative.

Overall, his new book feels like an invitation to sit in a classroom with a popular teacher who will carry us through dramatic events as a sweeping storyteller. Along the way, he pauses to sort out the conflicting opinions we hear from other sources about this era. Sometimes he debunks myths. Sometimes he admits that there’s really no way of settling a particular dispute, at the moment.

His aim is always to engage us. As a veteran author, he understands that our time is limited and we are torn between a myriad of distractions. So, Strauss has focused here on emperors who crop up frequently in news, in popular TV shows and in Christian discussion groups. I was particularly impressed, for example, at his balanced overview of Constantine, the so-called “first Christian emperor.” Many voices today ask: So, was Constantine really a Christian? Or was he faking it for political advantage? Curious about that? Get a copy of Strauss’s book and find out how he sifts the evidence.

Ultimately, there’s a very good chance, if you do get a copy, that you’ll wind up talking with friends about it in coming weeks. And that’s a very strong endorsement for any new book.