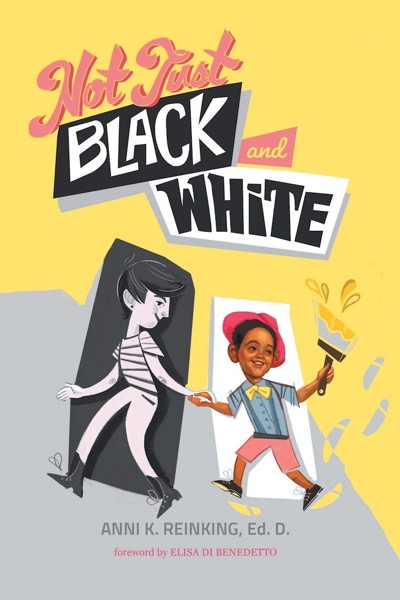 The front cover of Dr. Anni Reinking’s new book is a hopeful vision of how families can respond to the dangerous, daily friction over America’s growing racial diversity. Her title is: Not Just Black and White—A White Mother’s Story of Raising a Black Son in Multiracial America.

Cover artist Sara Kendall illustrated this timely new book with an optimistic image of Anni and her son Ahmad stepping confidently into a new day—as Ahmad cheerfully repaints the whole world around them in a sunny yellow hue.

Ahmad is just one child—but he also is a herald of a whole new America that’s dawning, whether people like this new world or not. There’s a reason NBC’s smash-hit TV series about a multiracial family is called This Is Us. The fact is: Diversity is our future. By 2040, America’s “majority” will be “minorities.”

Still skeptical? Pew Research reports that half a century after the U.S. Supreme Court made interracial marriage legal nationwide, the percent of diverse households has soared from 3 percent to 17 percent of married couples now—and to 18 percent of couples who are living together. Those trend lines continue to rise every year.

And that’s just in the U.S.! In her Foreword to this new book, Italian journalist Elisa Di Benedetto—known around the world for her work in covering migration and diversity—sums up the importance of this new book:

This book is an extraordinary journey towards awareness and learning. Through her reflections as a woman, a mother, a wife and an educator, Anni invites us to formulate a fresh point of view on a society where visible differences are constantly dictating the narrative … Ahmad himself represents the priceless treasure of each human life in this world with its unique blend of cultures, experiences and traditions. As you read this book, you will find that the figure of Ahmad is the key for shifting the black/white paradigm to a black and white model in which diversity is seen as a resource rather than a threat. In a time when millions of people are migrating to other countries, Anni’s family, a multiracial family, can be seen as a vital part of the world’s future.

Elisa is based in Italy, where she reports for European and international publications. In the United States, praise for Anni’s new book has come from Publishers Weekly (PW) magazine, which chose to highlight her book in its roundup of Notable African-American Titles. Here’s how PW describes her book: “Reinking, an academic researcher and mother of a biracial son, recounts her experiences as the white mother of a black child who is striving to understand and prepare him for the world of racial bias and discrimination he will have to navigate.”

No question: This book could not be more timely in this era of friction over diversity! Even before Anni’s book was officially released on January 8, the African-American writer and activist Christine Michel Carter described this book’s importance in the starkest of terms: “By the time you read this book, another black man will be killed by the cops.” Christine Michel’s larger message now is included as a Preface to Anni’s book.

A HUGE STEP ONTO THE WORLD STAGE 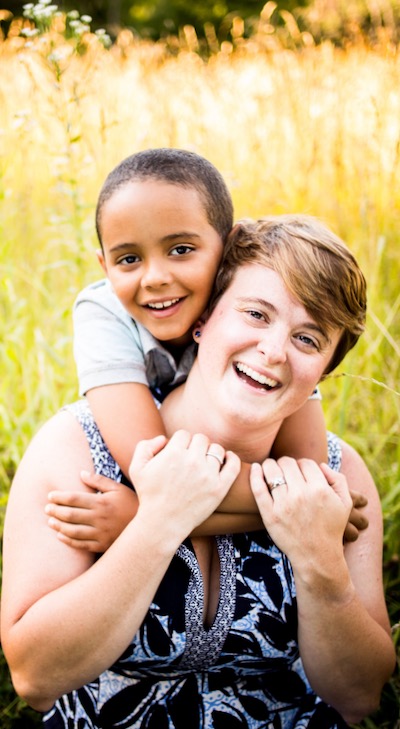 Anni Reinking and her son.

This is a huge step onto the world stage for a relatively young writer. However, as Anni explains in a short video (which you can watch at the end of this column), she has been preparing for this moment for years. She is ready to take the risk of wading out into the middle of these swirling international waters of change.

“This whole process really began when I gave birth to my son in 2009,” Anni says. “I started writing blog posts about my own experiences—then I realized those blog posts reached a wide audience.”

Anni’s discovery of the urgency of this discussion for so many Americans continues—even as her book is released.

“I keep learning more as people contact me. Because I am sharing my story in this new book—and connecting that news across social media—a lot of people are finding out about this and contacting me about coming to speak,” Anni says. (Care to learn more about Anni’s schedule as a speaker? Visit her personal website, where you’ll find listings of upcoming events plus a link to contact her.)

“One of those early contacts was from a group that’s part of a movement I didn’t know much about—’transracial adoption groups’—so I started researching this movement,” Anni says. “These are support groups for parents who adopt children of a different race. I had not been aware of these groups because, for a decade, I’ve been focused on explaining to people I meet that, no, I did not adopt my son. He’s my biological son. People meeting us for the first time often assume I adopted him, so I’ve been focused for years on countering that assumption.

“But now, because of this book, I’m learning a lot about these transracial adoption groups. And, it makes sense that there would be this growing number of support groups for transracial adoptions. I agreed to speak to the group in Peoria on January 27.” (Care to learn more? The MeetUp website has one list of such groups, including a few outside the U.S. The American Adoption Congress has a general list of adoption support groups, some of which focus on diversity issues.)

‘DOING EVERYTHING I CAN TO SPARK FRESH DISCUSSIONS’

“So, as a mother, a researcher and an author, I’m always open to learning new things as people connect and talk about this book I’m sending into the world. I’m doing everything I can to spark fresh discussions,” Anni says. Old biases and stereotypes about race still are deeply entrenched in American laws, public institutions, social customs, schools and personal relationships—often with tragic consequences.

“Just within the last year or so we’ve seen a rise in reports of white people calling the cops on black people for simply living in their community,” Anni said. “We all know about the case of the cops being called because two black men were simply sitting in a Starbucks waiting for their friend to arrive. We’ve also had reports about the cops being called because black people are simply standing somewhere in a white community—or gathering to talk with friends on a sidewalk. And, those incidents aren’t even included in the FBI statistics on hate crimes, which are on the rise each year.

“Every American should be concerned about this. It’s certainly troubling for parents raising black sons,” Anni said. “In reading my book, readers can expect to be pushed as I write about these kinds of problems we face every day. My goal is to bring up topics and raise questions that encourage everyone to reach outside their comfort zones. It’s when you start to get into an area of discomfort that you finally can start to grow.”

‘THE TRANSCENDENT POWER OF THIS STORY’

A major strength of Anni’s book is that she teaches and pursues her own research as an assistant professor in the early childhood program at Southern Illinois University Edwardsville.

As an expert in multicultural education, Anni guides readers by presenting important research-based evidence—as well as busting a number of myths. For example, she explains the “school-to-prison pipeline,” which sometimes begins with a racist tendency among many educators—most of whom are not even aware of their bias—to call in police when black students have discipline problems.

In the end, though, the heart of this new book are Anni’s personal experiences and her honest voice, telling true stories from her own life.

“You’ll find funny anecdotes as well as stories of hard times in her family,” Elisa Di Benedetto writes in the Foreword. “That’s the transcendent power of this kind of story. … Anni takes us around the world in her story: from a little church in an American small town to Kenya; from current America to old, yet contemporary, Europe with its past of colonialism and slavery; from her own childhood to the childhood of her son Ahmad. As you travel with Anni through this narrative, you’ll find yourself thinking of your own family, friends and neighbors. Soon, you’ll find that her story spins off into your own reflections.”

“I hope that many people discover their own stories are reflected in my book,” Anni says. “After all, this is the story of millions of families. By 2040, minorities will be the majority in America.

“I hope this book reaches many, many people. I hope that people who read it will tell their friends and relatives—and start a discussion about this. I hope book clubs will pick up this book and community groups will recommend this to their members. As Americans, we really need to talk about this. Too many lives are at risk right now. If they start reading and talking with others—people can really make a difference.”

VISIT ANNI’S WEBSITE—Her personal website is full of information about her work and travels.

WATCH HER VIDEO—Below you should see a YouTube screen. Anni regularly reaches out in many forms of public media. In this case, she simply wanted to talk to prospective readers as her book reached its release date on January 8. So, enjoy seeing Anni welcome you to her story …