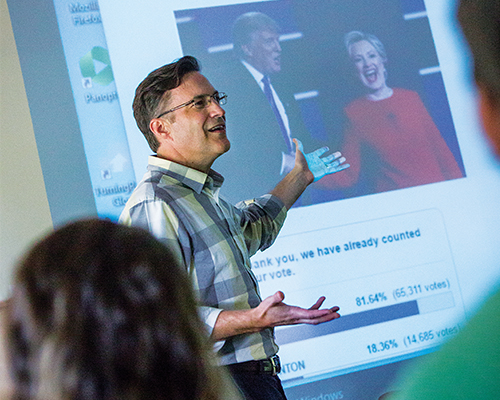 Click on this photo of Dr. Kelley Strawn to read Richard Cimino’s entire column about the stalemate between religious and secularizing movements.

The debate about whether the world is entering a more secular age and whether the growth of religiously non-affiliated people is hastening such secularization in part revolves around questions of timing.

In other words, when did these trends start and what led to them?

Two new studies using time-related data argue that the growth of secularism and non-affiliation has been happening for some time, that its causes are far from clear, and that they don’t necessarily signal a one-way secular future.

A recent article in the Journal for the Scientific Study of Religion looks particularly at “political secularization,” which relates to the degree that nations show religious influence in their political life.

The study finds that most of the secular changes took place several decades ago.

Read the rest of Richard’s article …

Visit the website for ARDA. Here is a direct link to Richard Cimino’s complete August column. ARDA welcomes sharing of these columns, of course with a proper attribution. Plus, there is also a lot more fascinating data about religion to discover on ARDA’s website.