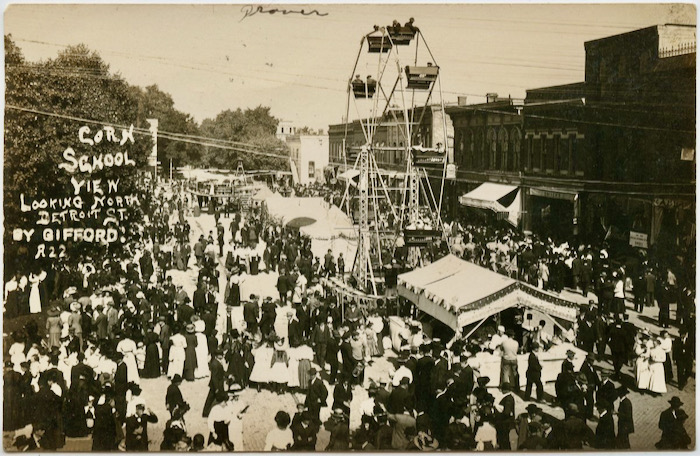 An early Corn School in LaGrange perhaps 1909 or 1911, decades before Doug Yunker was born.

Corn School is both a festival and one of the few traditional, rural-American street fairs still in existence. It takes place in downtown LaGrange, Indiana, in the first week of October every year.

The festival originally started as a one-day opportunity for boys in the local corn-growing classes to show off their products. A day was designated in their honor and they could win prizes for their corn. Notables such as Indiana Gov. Frank Hanly and the State Secretary of Agriculture were speakers for the event for the first couple of years.

In just a few years, the Corn School tradition evolved into a rural street fair that opened on Tuesday and continued for a week—with the exception of two years during World War I, three years during World War II and one year, 2020, because of the pandemic. The centerpiece was the Corn School Week Parade. The “premium list” for the week-long fair—that is, the categories in which entrants could win cash prizes—included livestock, poultry, farm products, needlework, fruit, pastry and for a time, 4-H Club work. In 1938, the LaGrange County Corn School, Inc., was established as a non-profit corporation.

My grandfather taught corn growing classes and my father was one of the boys who competed to win a prize for his corn growing skill.

By the time I was aware of Corn School, it had long ago expanded from a simple harvest festival into an elaborate celebration with carnival rides, games, talent shows, food vendors, parades—and still the traditional vegetable awards. Crafts and canned goods were displayed in the public library. As it grew, fortune telling, games of chance and entertainments became popular at the fair and the parades did as well. By the time I was able to enjoy Corn School, the parades were led by the presiding Corn School Queen, a tradition started in 1950. The Corn School Queen still is crowned every year and local businesses still contribute prizes.

By the time I was 10 and able to roam Corn School unattended, it had become mostly a carnival. Cotton-candied and caramel-corned, I rode the merry-go-round, bumper cars and Ferris wheel. I won my first live duck by skipping a nickel onto a plate. At Corn School I visited a small wax museum depicting various atrocities, including a woman who had been stabbed in her naked breast.

I also perused The Jesus Cabinet of Curiosities. The fascination with cabinets of curiosity also has evolved—all the way from natural history exhibitions in the 16th century to suspenseful novels and short stories today that draw on this idea in various eerie ways.

In my case, I paid 50 cents to enter a carnival-style chamber of wonders inside a semi-trailer presided over by a man who looked like a priest.

The room was shadowy, lit by candles and hanging lanterns and dominated by long tables covered in purple velvet. From somewhere, organ music purred Ave Marie and I Walk in the Garden with Him.

Greeting us were faces of religious notables—the Virgin Mary and Jesus—and lots of symbols: crosses, rosaries and other manifestations of miraculous origin! 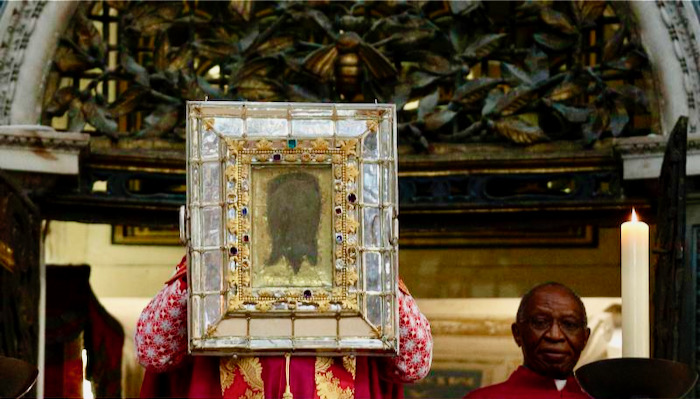 MILLIONS STILL VENERATE SOME OF THESE IMAGES. Msgr. Francesco Camaldo holds up the Veil of Veronica in St. Peter’s Basilica at the Vatican. The relic is one of the major treasures kept at St. Peter’s and veneration of this cloth is recorded from the 8th century. Since the 17th century, then, the Veil has been displayed annually during vespers on the fifth Sunday of Lent.

The Wonders I Witnessed

As an awe-struck boy, as I stepped further in this truck-sized Cabinet, large photographs displayed apparitions of Mary and Jesus:

As I approached the exit at the far end of the trailer, a nun-looking woman urged me to purchase a crucifix or myrtle wood cross, perhaps a Bible or a sachet of frankincense for mother. It was Catholic intimidation of this Protestant that accounted for my payment of 50 cents for a booklet, The Way of the Cross, the only exit gift I could afford.

As Lent and Holy Week approach each year, these memories reemerge. I recall my own curiosity about what I saw that night at Corn School. Even then I thought the displays were far-fetched. I was a Doubting Thomas early on. All these years later, of course, I know that The Jesus Cabinet of Curiosity was not some bizarre isolated phenomenon, but a part of a larger cultural phenomenon introduced to me when I was just a kid in rural Indiana.

For example, I now know The Jesus Cabinet of Curiosity included some of the historical religious imagery and symbols found in natural phenomena, sometimes called simulacra. They are sightings of images with spiritual or religious themes of importance to the perceiver. The original phenomena of this type were acheiropoieta: images of major Christian icons such as Jesus and the Virgin Mary. Acheiropoieta is roughly translated to mean “not created by human hands.” These are said to have spiritual powers.

Scientifically, such imagery is generally characterized as a false perception of imagery due to what is theorized as the human mind’s over-sensitivity to perceiving patterns of a human face, in otherwise random places. From cultural and psychological perspectives, perception of an image, icon or symbol of religious or spiritual import to the perceiver is mediated or filtered through his or her politics and worldview.

Tasting the Spirit: From Fanesca Soup to Pretzels

Fortunately, there is a more satisfying aspect to religious iconography:

Think of the religiously inspired Holy Week foods you can enjoy. 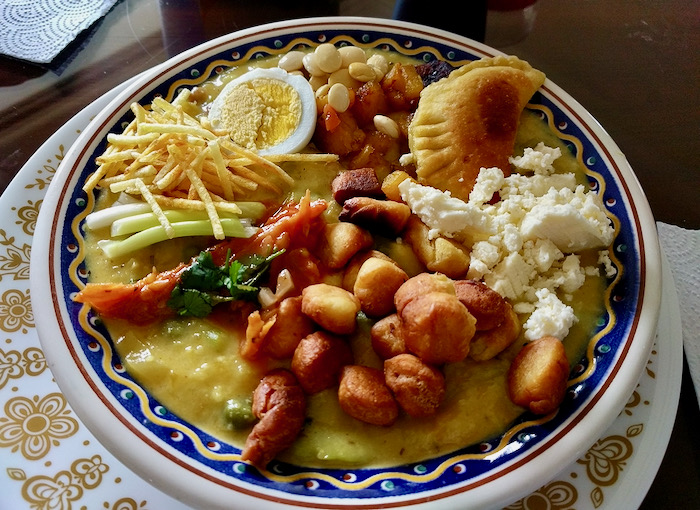 THERE ARE MANY DELICIOUS RECIPES for Fanesca online, each with a little different twist on the Ecuadorian tradition. Here are just a few of them: Epicurious offers a “streamlined” recipe without the added empanada; then here is an alternative version from GimmeYummy’s website; Food Channel competitor and cooking teacher Emma Frisch offers this recipe, which is complete with lots of photos to help you prepare the dish the first time.

DOUG YUNKER is Professor Emeritus, School of Social Work, Boise State University. He resides on the Oregon Coast with his wife Susanna and dog Riley. He is a writer, watercolorist and gardener. He is a member of St. Luke by the Sea.

Doug also is a first cousin to ReadTheSpirit Editor David Crumm. David’s branch of the Yunker family moved away from northern Indiana and David never had the pleasure of attending Corn School, although—as a lifelong journalist writing about religious diversity—David certainly envies Doug’s chance to walk through The Jesus Cabinet of Curiosities. Despite an exhaustive search of newspaper clippings from the era of Doug’s childhood—no trace of this mobile “Cabinet” has been found. Like a lot of the haunting stories, these days, that touch on such Cabinets—this rolling carnival Cabinet seems to have appeared on the circuit for a fleeting time.

Then, it vanished without a trace.

That’s why we urge interested readers to enter this world of wonders—as Doug suggests—through the world of delightful symbolic Holy Week foods like Fanesca. However, just in case any of our far-flung readers should spot this venerable semi-trailer of Curiosities still rolling along America’s back roads, give us a holler!

THIS COLUMN by Doug originally appeared in the quarterly magazine The Labyrinth and is used with the permission of both Doug and the editors of that magazine.

AND, THEN, AN EDITOR’S NOTE—The Labyrinth is a lively magazine about spiritual diversity published via PDF and email. While we receive hundreds of emailed newsletters and PDF magazines, each year, The Labyrinth is one of the best we’ve seen at ReadTheSpirit—and that’s not just family bias. Our friend Richard Rohr calls this magazine “a powerful spiritual tool reminding us that life is more like a plate of spaghetti than a grid.”

You can read four back issues of The Labyrinth here. There are lots and lots of columns, prayers, photographs, ideas, questions and meditations to enjoy!

The Labyrinth is supervised by two editors: