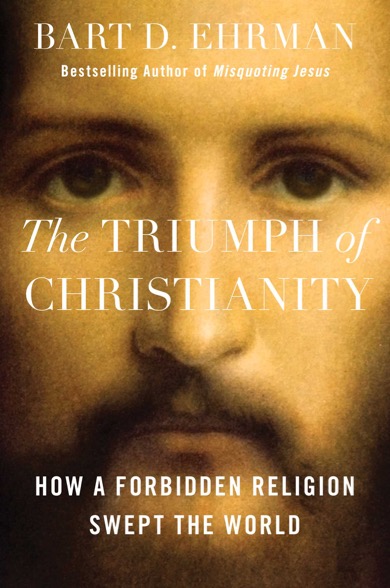 Question: What’s the most common term used to describe best-selling Bible scholar Bart Ehrman? The answer is easy for anyone who recognizes his name: Controversial.

In fact, followers of the popular Bart Ehrman blog know that Bart regularly writes about this topic. He likes the headline: On Being Controversial, choosing that title for two columns in recent years, the most recent in February. Then, whenever this “controversy” question is raised, Bart responds in this way:

“I’ve always been puzzled by that. I really don’t see myself as very controversial. The scholarship that I present in my public talks, and in my popular books, is simply widely accepted scholarship, the kind of thing that critical scholars of the New Testament and early Christianity have long known and quite frequently simply assume. The difference is that I actually talk about it, out loud, to general audiences. That makes me different from most scholars in my field. It’s not that my views are particularly unusual. It’s that I air them to the public.” (from a 2017 column on the topic)

He’s right about that. Most Americans who love the Bible and discuss it in the millions of church groups nationwide (many of them called Sunday School classes; others called Bible study groups) never grapple with the host of questions scholars raise about the historical accuracy of biblical texts. Bart turns these academic conclusions into best-selling books, then appears in nationwide media including National Public Radio to discuss the issues. He disturbs those people who prefer to ignore university-based research into the Bible and the ancient world.

So, the publication of Bart’s latest book, Triumph of Christianity: How a Forbidden Religion Swept the World, certainly is notable because it is unlikely to spark controversy. In fact, from the perspective of many traditional churchgoers who have shunned Ehrman—this new book is likely to be very popular for some its basic conclusions:

So, here’s a pointed recommendation to readers: If you’ve never dared to recommend a Bart Ehrman book for the class or small group or Bible study circle in your congregation—start with this one! Those three conclusions should warm the hearts of most churchgoers who care about their faith and who already know that Christianity, at its best, is a person-to-person network of relationships that grows through authentic everyday contact.

It’s not a spoiler to say that, after more than 300 pages, those are Bart’s most important conclusions. Why make the effort to discuss this book in your small group? Because Triumph of Christianity carries the remarkable authority of a scholar who is unafraid to talk about the truth of his research. If he had discovered something else in his most recent years of digging, he would have said so.

In our interview about the new book, Bart and I mainly focused on his book’s section, Reasons for the Christian Success. In the book, he  credits Paul with an incredibly effective talent for starting and encouraging Christian communities, but beyond Paul? To put it bluntly: There wasn’t any ancient Billy Graham or anything like TV evangelism or evangelical publishing houses, today.

“It’s weird, I think, but there just aren’t many mentions of missionaries out there in those early centuries. Sure, there were a couple and I mention them in my book, but there was very little evidence of people wandering around the empire trying to convert people,” Bart said.

Here are a few lines from Bart’s book:

“If Christians did not convert others through organized missionary efforts, how did they do it? The answer is simple: It was not by public preaching or door-to-door canvassing of strangers. They used their everyday social networks and converted people simply by word of mouth. … A Christian woman talks about her newfound faith to a close friend. She tells the stories she has heard, stories about Jesus and about his followers. She also tells stories about her own life, how she has been helped after prayer to the Christian god. After a while, this other person expresses genuine interest. Over time she considers joining the church herself. When she does so, that opens up more possibilities of sharing the ‘good news,’ because she too has friends.”

Obviously, this is not a ground-breaking revelation. In our interview, I reminded Bart of the poetry of Egyptian-Greek poet C.P. Cavafy (1863-1933), who evoked haunting scenes from the ancient world. Among his most famous poems was Myris, Alexndria, 340 AD. That’s a narrative poem written from the perspective of pagan friends of a young man named Myris, who dies and turns out to have been a Christian convert. From the sidelines, one of Myris’s friends marvels at how other Christians surround Myris, in death, as a vibrant community. Among the most powerful lines are these:

I noticed with how much diligence,
how much intense concern
for the forms of their religion, they were preparing
everything for the Christian funeral.
And suddenly an odd sensation
took hold of me. Indefinably I felt
as if Myris were going from me;
I felt that he, a Christian, was united
with his own people and that I was becoming
a stranger, a total stranger.

I asked Bart, “When I read that section of your book, I immediately thought of Cavafy’s scene. The reality of that new Christian community struck Myris’s friends like a thunderclap. This was something new in the world.”

“I see a couple of things in that scene you just read,” Bart said. “One of them is that central point: Christianity spread person to person. The other is that Christianity also raised some antagonism in people who weren’t Christian. To people who lived their whole life in what we call the ‘pagan’ world, Christians were bewildering. Some accused Christians of being religiously intolerant. In the Roman world, Christians sometimes were considered to be atheists—denying the reality of all the Roman gods because they believed in their own god. It really was a time when this awareness of Christianity and the Christian stories were spreading by word of mouth and there were a lot of different reactions to that. Some of the reactions weren’t positive.”

In more than 300 pages, Bart Ehrman raises a host of fascinating questions. In this column, we are merely hitting highlights.

Another chapter readers will be eager to discuss with friends is called Miraculous Incentives for Conversion.

In our interview, Bart summed it up this way: “I think miracle stories were a major factor in the spread of Christianity. If you think about it: That’s a major reason people practice religion. You’re saying there is a divine power that can provide things that human power can’t provide. The gods are worshipped because of the benefit one gets from that.”

In his book, he writes:

“What persuaded people were not so much the new doctrines that were being propounded or the reports of Christian ritual activities or even the many virtues of these communities of faith. What made the difference were the amazing stories that verified the Christian message. From the beginning, starting with the astounding life and ministry of Jesus himself and continuing through the work of his apostles and then their successors, the power of God had been manifest in real and tangible ways. God was at work, and his followers could prove it through the miraculous activities they engaged in. Few people could claim to have observed any of these spectacular miracles of faith. But that was not necessary. All that was needed was belief that such things had in fact happened, and possibly that they continued to happen.”

That section of Bart’s book is sure to kick off a spirited discussion in your class or small group.

And, before we close this column on Bart’s work, we can forecast: More controversy is on the horizon. In his blog, Bart already is telling his readers that his next book will be about how concepts of heaven and hell were developed—and how those ideas shaped Christianity. And he has promised that book, titled Inventing the Afterlife, will indeed be controversial. In his blog, he writes: “It won’t contradict what most critical scholars have concluded based on their research, but it will run contrary to what people at large typically think.”

Perhaps after a successful, spirited discussion series on The Triumph of Christianity, you can make plans for another series a year from now on the Afterlife. You can be sure of this: No shortage of discussion!

You’ll find lots of books that are great for small-group discussion in our own ReadTheSpiritBookstore and our new Front Edge Publishing Bookstore.