By BENJAMIN PRATT
Author of Guide for Caregivers

We enjoyed naming her—Patience, was the final selection. We considered other names: Unfluffable, Purrsisstent, Queen for the Month, Constance, Perseverant. Patience seemed the most accurate, stable, defining name for our Mallard Mama in these restless, unstable times.

Every day for more than two weeks our walks took us by the pond to see Patience, who faithfully incubated her 11 eggs. We were not alone in cautiously keeping tabs on her, hoping that one day soon we would see her waddling along with ducklings trailing behind. Mamma Mallard, the model for persistent patience—embodying for us Love in the Time of Pandemic—gave us guidance, hope, comfort as she sheltered against the hours while remaining faithful to her loving task of bringing new life into a threatening world. We need teachers like Patience in these times when so many of us are confined and restrained from our hurry-scurry lives.

In Tennyson’s words, “Nature—red in tooth and claw” dashed our hope.

One morning recently, early walkers discovered Patience floating on the pond—her 11 eggs gone. Only a few downy feathers remained on the nest.

The word passed through our community like the plague—breaking hearts, dashing hopes, erupting anger and a few tears. Nature was teaching us the cruel, fragile, vulnerable, uncertain reality of life, the side we try most to avoid.

After enduring my own moments of sadness and disappointment, I remembered the phrase I learned from my study of Bond, James Bond, that “one must teach them there is no top to disaster.” This is a reality most of us hope to never encounter. Yet, in these seasons—we do.

A STORY WITHIN A STORY—
A VIEW TO A KILL

Often, in seasons like these, we turn to stories. You are reading my story about Patience, right now. In my own grief, I reached even further back to the novels I have studied—and written about—over the years that delve deeply into life’s unfathomable waves of violence.

Ian Fleming, the scribe who recorded the tales of James Bond, 007, set out to provide modern parables about the deadly sins that afflict our world. Some claim that his James Bond, in moments of the most dramatic urgency, had “The Nelson Touch,” for his amazing ability to escape with only minor injuries. Such was the case when Bond courageously risked life and limb, sustaining only cuts, bruises and loss of blood, in his mission to destroy Ernst Stavro Blofeld’s biological warfare. Unfortunately, Blofeld and his invention, which was designed to unleash bacteria (anthrax) and viruses on England—escaped!

One would think, even hope, that Nation, God and Life itself, would reward this public servant for his sacrifice, service and distinguished work on behalf of all mankind. However, life does not always give rewards to those most due them. In Fleming’s fictional world, Bond was granted ten days leave to marry Tracy, La Comtesse Teresa di Vicenzo, on New Year’s Day at the British Consulate in Germany. That very afternoon his wife, Tracy, was murdered by Blofeld. He never remarried.

Bond’s spirit was broken, his soul and body wounded. He suffered from shock, grief and guilt. He stopped showing up for work, lost his sense of mission, and his zest for life was gone. He was not interested in his job or even his life. He drank, gambled and smoked more. He, who didn’t usually make mistakes, had become accident-prone. He bungled the jobs he was given.

M—Bond’s ever-demanding boss—fearing that he was losing one of his best agents, sent James to be examined by Sir James Molony. After the exam, Moloney reported to M that his agent was in shock, suffering from despair over the loss of a loved one, a death he believed he caused.

If you are a veteran of war, a first responder, one who has lost a comrade in battle, you may recognize the symptoms of agony in soul and body, the loss of zest for life and purpose, as experienced by James Bond. Listen to the wisdom of Sir James Molony.

He reminds M that “one must try and teach people there’s no top limit to disaster, that so long as breath remains in your body, you’ve got to accept the miseries of life. They will often seem infinite, insupportable. They are part of the human condition.” When, not if, life sends us over the top, we are not sure how or if we will cope and recover.

Molony has more wisdom to give. In response to M’s bewilderment about what to do with his agent, Molony says, give him “something that’s desperately important but apparently impossible…what he needs most of all is a supreme call on his talents.” Three months on a sunny beach won’t do it—give him an impossible mission.

So, M sends Bond to Japan where Blofeld has reincarnated himself as Shatterhand. (This is an important clue, a classic ability of the Devil to reappear as a new form of evil.) Here, Shatterhand has created a Castle of Death where people can go to commit suicide. James Bond might well have chosen this direction with his own despair. Instead, Bond confronts Shatterhand, the dragon of despair. Bond slays the despair in himself, in Shatterhand, and he destroys the Castle of Death.

On the morning of 9/11/2001, Michael Flocco and his wife lost their only child who had been on the plane flown into the Pentagon. Michael, a sheet metal worker, was in shock, devastated by grief.

Like Bond he drank more, stopped showing up for work, and was on the edge of despair. Every morning he sat at his kitchen table, drinking a pot of coffee, turning to booze by 11 a.m., leafing slowly through their only family album with pictures of his son.

One morning his wife saw a classified ad: “Sheet metal workers needed to restore the Pentagon.” She clipped the ad and placed it in the album. Michael found it and stared at it quietly.

Then he called his boss and asked to be assigned to the Pentagon. Michael went to restore the building where his son had died, and hopefully, to restore his own body and soul.

Michael Flocco is one of my true life Bond heroes.

Nature teaches us, as do fictional characters and real people like Michael Flocco. We need their wisdom, patience, courage and faith in these times which are testing and trying our souls. 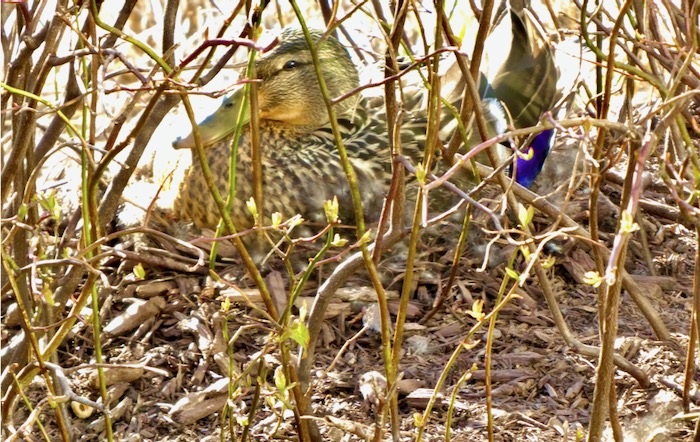 This photo of Patience by Benjamin Pratt. Photo at top by Alain Carpentier, shared via Wikimedia Commons. BEN’s book Guide for Caregivers is one of four books recommended by Susan Stitt in a column about books that can help families deal with their burdens and their grief in the midst of a global pandemic.

BEN’s book Ian Fleming’s Seven Deadlier Sins and 007’s Moral Compass has circled the globe, sparking discussions in congregations and among friends worldwide. A group in New Zealand even hosted a series on this unique book. Here’s a link to the book’s Amazon page.

One of the 5-star reviews says, in part: “The questions Pratt poses are contemporary, relevant and perfect for a small-group Bible study setting. Don’t get hung up on the immorality portrayed in the James Bond movies. Read the original literary texts of the James Bond series, which are so much more satisfying than the films, and you will recognize the Biblical themes which Benjamin Pratt desires for us to consider.”