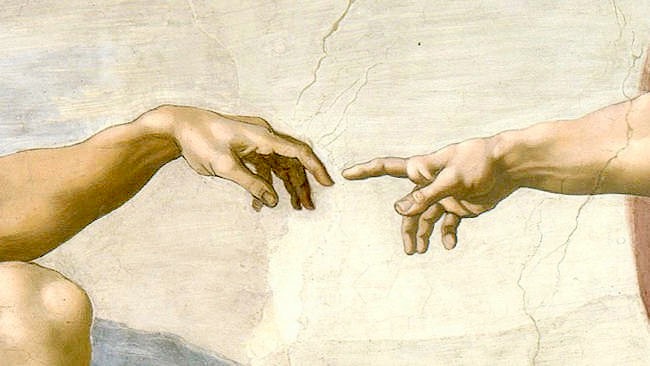 “I think grief is like a really ugly couch.
It never goes away.
You can decorate around it;
you can slap a doily on it;
you can push it to the corner of the room—
but eventually you learn to live with it.”
from Leaving Time, Jodi Picoult

EDITOR’S NOTE—Contributing writer Benjamin Pratt is the author of books about everything from spiritual discernment and prayer to the need for caregivers to invest time in caring for themselves. You can find Ben’s books at our ReadTheSpirit Bookstore and our new Front Edge Publishing Bookstore. This week, he shares this brief encounter, a story he calls:

Human hands. This subject fascinates artists, including Michelangelo (above), DaVinci (shown here) and Escher (below).

“How is it we know each other?”

These were the surprising words of my very close friend and colleague of 45 years.

Less than two months ago, David called to tell me that, in addition to Alzheimer’s, his long-ago-treated prostate cancer had metastasized to his bones. He had nine months to live. He said he had a bucket list of a few people he wanted to see again before he dies. I was at the top of his list—and now he couldn’t remember how we know each other.

David was my teacher, mentor, friend, colleague, confidant, co-therapist— sharing a life as clergy with a calling to pastoral counseling. With our spouses and another couple, along with seven daughters among us, we formed a house church with the hope that our daughters would all be blessed by the wisdom and values of other adults we deeply admired. We shared meals, conversation, music, games, vacations, and lively fun. We all benefited from these long, enduring and sustaining relationships.

The memories still sustain and guide us.

Memories—baked in the fires of life’s events and relationships—are the crafted bricks of identity. Cemented in place by some as-yet-mysterious process—without them I am lost, adrift, off-balance, isolated.

Memory is at the root of relationships, too. I know who I am by the memory of pivotal stories with others.

My very good friend has lost much of his grounding.

My wife Judith and I took the train to North Carolina to visit David and Lynn and their family. “Train” takes on a double meaning as it has occurred to me that I am in training to learn how to say goodbye.

When we first disembarked, we were shocked by David’s gaunt, pale appearance—his frail, diminished body. He has always been lean, so much so that I often teased him that he could sleep in the shade of a clothes line. Walking slowly with a cane, he is now, disturbingly, thinner still.

Our time together was spent as a foursome and as pairs as we shared memories, offerings, gratitude and hopes. Lynn, David’s wife of 50-plus years, and we shared memories in the midst of her describing her physical, emotional and spiritual struggles during this very taxing time as his caregiver. We sought to give her comfort and encourage her to take good, mindful care of herself. When Judith or I shared memories with David, it appeared he sometimes had a glimmer of recognition but not enough clarity that he could hold onto the memory for long.

But there were two questions I asked David that sparked remarkable insight and certainty. He was his old, familiar, wise and thoughtful self.

We had been discussing the limits of our bodies and our mortality. I asked, “David, do you know where you are going?”

Without hesitation he said, “I will have a place to continue being me. I will be with others who have meant a lot to me. And others who matter so much to me now will join me later.” A remarkably clear faith statement—as if the line of the Christmas hymn, “all the hopes and fears of all the years are met in Him tonight,” is imbedded in his soul.

While the four of us were having dinner, I reminisced about our day of sharing memories that were serious, humorous and mysterious. Each of us had expressed our gratitude to David for how he has contributed to our lives. I said, “Let’s turn it around. Tell us how you hope you will be remembered by us and by others.”

Again, with remarkable clarity and precision, David said, “I hope I will be remembered as a man who listened and heard what individuals wished me to hear. I hope they felt I was giving them the attention and respect they deserve. I wanted them to feel important, valued and respected. I hope I responded in a helpful way—so they could know themselves more deeply. I hope my writings and public speeches were understandable, informative, insightful and provocative.”

My friend David—always an hospitable man—is a gentle, compassionate soul.

As we walk part way to eternity with each other, he is teaching me still: this time, how to say goodbye. 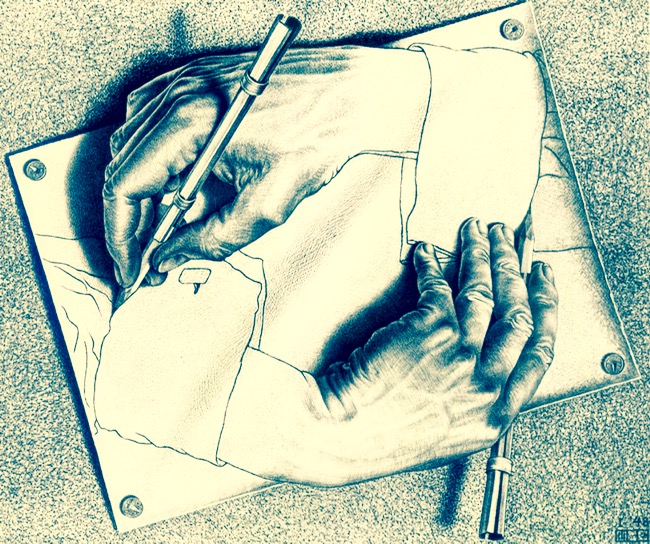