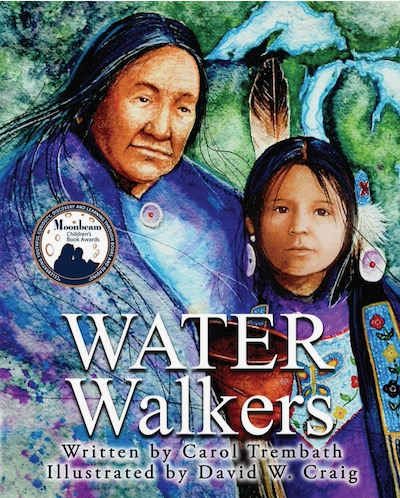 Click on this cover to visit the book’s Amazon page. This is the first Water Walkers book by Carol Trembath with illustrations by Daniel W. Craig.

For a long time, Native people have been viewed as the first environmentalists. Their ideals of caring for Mother Earth and her lifeblood water have always been at the forefront of their actions. However, today Mother Earth’s traumas have brought humanity to an environmental crossroads.

How are Native people responding? In many ways! My life has connected with one of the most remarkable and unusual efforts, led by Native women.

In 2013, while attending a National Endowment for Humanities project in Chicago, I saw the exquisite Fountain of the Great Lakes. It depicts five women each representing one of the Great Lakes, dressed in Greek garb, pouring water from their conch shells from one figure to the next in a beautiful cascade. At that point I had chills and I knew I had to write a book about water—but where to begin?

I found that the fountain’s sculptor, Lorado Taft, also created a three-story monolith of Chief Black Hawk, which stands over the Rock River in Illinois. That was another stepping stone in my research.

My journey led me to a group of Anishinabek women called the Mother Earth Water Walkers. Ojibway members from Canada and the United States were led by Grandmother Josephine Mandamin. 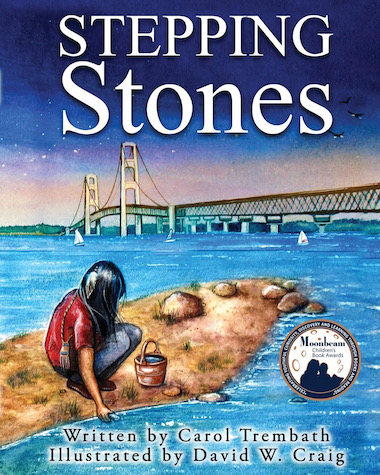 Click the cover to visit the book’s Amazon page. This is the second book by Carol to follow the Mother Earth Water Walkers.

Josephine heard the prophecy and decided with a group of supporters to take up the challenge. She began water-walking around the Great Lakes.

In the spring of 2003, the Mother Earth Water Walkers—carrying a copper pail of water and holding an eagle staff, began their first journey walking the circumference of Lake Superior. Each morning, they would visit the big lake and say sacred words and sing songs for the water. They would leave behind their gift of tobacco, then walk 30, 40, or 50 miles a day. Their belief was that their prayers would be lifted to the Creator.

Their first walk around Gichigami—Lake Superior was 1,372 miles. Walking—the slowest form of transportation, reinforced an ancient value of taking a stand. Each step was a prayer for Mother Earth, the winged-ones, four-leggeds on the land, swimming creatures, insects, trees and the human family. Since then they have walked over 20,000 miles around lakes, rivers, and waterways across the United States and Canada. Over time, water from lakes and even oceans has been carried in copper pails over countless roads in an effort to show the importance of water—which they believe is alive and has a spirit.

Admiring their efforts, I too took up the challenge. I began writing a series of picture books that shared their story with readers nationwide.

In 2014, with the help of my Ojibway artist, David W. Craig, I self-published my first picture book, Water Walkers: Walking Lake Superior. 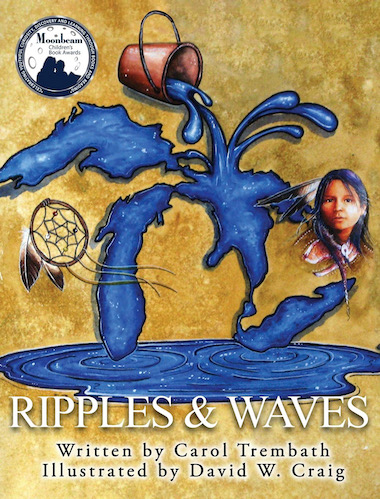 Click the cover to visit the Amazon page for Carol’s third book in this series.

Since then, I have published two more titles, Stepping Stones: Walking Lake Michigan, and Ripples and Waves: Walking Lake Huron. These are fiction, telling the tale about a young girl’s journey with her grandmother and family members walking the circumference of the Great Lakes.

At this time, the fourth book in the series, Pass the Feather: Walking Lake Erie, is being prepared for publication. The important message of this book is that everything on earth has been given as a gift by the Creator—but each carries a responsibility. The gift to humans is that we, among all living things, have the ability to say, “Thank you.”

Mother Earth provides for us and that is what all good mothers do. But, we too need to say, “Thank you,” and honor and care for our Mother Earth and her lifeblood water. It is time to pass the feather and for others to continue the journey.

The Hopi have said, “The time for the lone wolf is over. Gather yourselves. We are the ones we’ve been waiting for.”

When Grandmother Josephine was asked why she is doing all of this, she answered, “We are not doing this for us; we’re doing this for you. What will you tell your children when they ask, ‘What did you do for the water?’”

What can you do to help?

Visit my own website and check out my various projects, including a historical novel about the life of another strong and prophetic woman: Harriet Tubman.

You could purchase my books through the Amazon links, above. Or, if you email me (at [email protected] ), I can arrange to personalize a book and send it to you, if you live in the U.S.

You also could commit to a cleaner earth by starting in your own community. Start composting at home, go on a walk to pick up trash in your neighborhood, or plant a tree. Learn the power of community. There are plenty of activist groups. Visit your local Sierra Club. Organize a local water walk.

To all: Chi-Miigwetch! (Big thank-you) 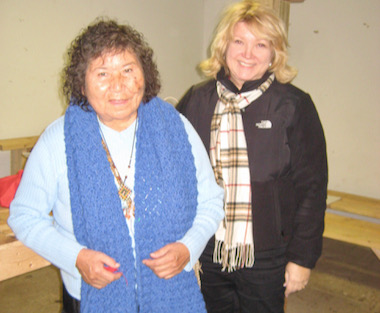 Born and raised in the Great Lakes State of Michigan, Carol Trembath has made water a lifelong focus and passion. Carol has been an educator, librarian/media specialist for 30 years. She earned a Masters Degree in Library and Information Science from Wayne State University and a second Masters in Educational Technology from Michigan State University. Carol has been an educator in the Plymouth-Canton School District, Allen Park Public Schools, and the Walled Lake Consolidated Schools. Carol is a member of the Michigan Reading Association, American Library Association, and the Society of Children’s Book Writers and Illustrators.