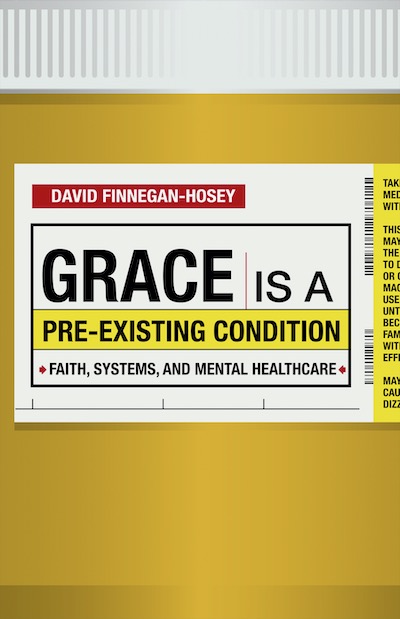 Click on the cover image, above, to visit the book’s Amazon page. David’s book also is available from Barnes & Noble—or, you can order it directly from the Church Publishing website.

In the midst of a global pandemic, millions of Americans are losing their jobs at a rate of “devastation not seen since the Great Depression,” according to the NY Times. While millions of those jobs are predicted to spring back after COVID-19 is controlled—a largely ignored tsunami is building across America:

Along with their jobs, millions have lost health insurance—and are facing soaring medical debt that can cripple an entire generation of Americans.

America’s more than 350,000 congregations are working overtime to serve families with a wave of new online inspirational offerings—as well as tangible help including new kinds of community service and food distribution. What no one is discussing, in the midst of this crisis, is the years-long impact of the pandemic on public health as well as the medical debts families will shoulder for many years.

That’s why David Finnegan-Hosey’s new book, Grace Is a Pre-Existing Condition—Faith, Systems, and Mental Healthcare—should be in the hands of clergy and small-group leaders in congregations nationwide, right now. There is not a more timely—and uniquely focused—book for congregations this spring. The book comes from our friends at Church Publishing, the publishing arm of the Episcopal Church.

“The brokenness of our health care system has been on grim display in recent weeks,” Finnegan-Hosey said in an email as we were preparing this cover story. He is known nationwide as an advocate specifically for the millions who have fallen through the fragile mental healthcare safety net—but he is well aware that spiraling medical debt will spring up in many families, this year, for a wide range of conditions.

Certainly, all of us are in awe of the courage and commitment of medical personnel. All of us cheer the scenes of celebration when COVID-19 survivors leave hospitals. However, the medical professionals in our communities are the first to tell us: Our American system of health care and insurance is crumbling. Suddenly, tens of millions of unemployed Americans are being pushed outside the safety net of insurance, which was full of holes in the first place.

If you have medical professionals in your small group or congregation, ask them to read Finnegan-Hosey’s book with your discussion group. You likely will find them welcoming this opportunity to shine a helpful light on these issues affecting millions. Very likely, some families in your congregation are silently shouldering crushing medical debt already—with more families to be affected soon.

FOR PEOPLE OF FAITH,
OUR PRE-EXISTING CONDITION IS:
CARING 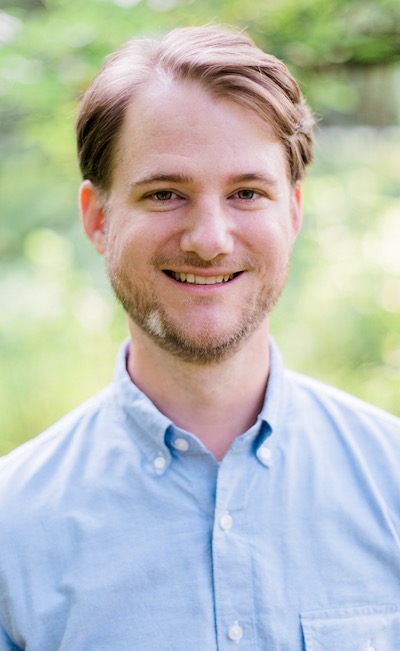 David Finnegan-Hovey (Clicking on David’s photo will take you to his website, which is packed with resources to learn more about his ministry with physical and mental healthcare—including a discussion guide for his new book, which will be available soon.)

Finnegan-Hosey’s own story—and his national advocacy in books and public appearances—begins with the largest gap in our healthcare system: mental health services.

In 2018, we introduced our readers to his first book, a memoir he called Christ on the Psych Ward. In that Cover Story, we reported: “This personal narrative tells of David’s struggle to overcome his crisis with mental health. Along the way, he invites us to look at how churches can respond more appropriately to the millions of families facing these issues every year. His theme draws on the same deep religious traditions that have animated our online magazine for more than a decade: the spiritual solace of stories.”

His new book examines more closely how our American healthcare and insurance systems are designed to favor the healthy—and to ignore millions of men, women and children with exclusions such as “pre-existing conditions.” For Christians, Finnegan-Hosey argues, that insurance-industry concept smacks of a moral argument that blames and excludes huge numbers of at-risk families as if their health problems are their own fault—not the insurance company’s responsibility. That’s not what our Jewish and Christian traditions teach about God’s loving grace that extends to every single soul in the world, he argues. From the beginning of the world—and the beginning of our lives—God’s grace underscores the unique and irreplaceable value of each life and calls us to care for each other.

“Stories are powerful,” Finnegan-Hosey said in our interview. “Stories create community. Our multiple stories join together to become a chorus for change to the way the system operates. How we start our story matters. In the beginning, as we are created, God says that this is good. Our story begins with a vision of wholeness. But, our healthcare system starts with pathology—brokenness—and how risks will be managed.”

In the opening pages of his book, he explains this shift in thinking in much more depth, including this passage:

“When I name grace as a pre-existing condition, what I mean is that grace is the original state of creation, the foundational reality on which our existence is presupposed and form which it arises. … We are breathed into being, formed, by grace. Nothing to be done about that. But what we can do, what we are quite stunningly capable of doing, is get in the way of grace, restricting and blocking the channels by which divine love flows in and through us. When we refuse to listen to people who are sick and suffering, people struggling with cancer or mental illness or diabetes or chronic pain, people who have been targeted by violence or abuse or oppression—we block grace. When we shut down our inherent capacity for empathy and connection, see people as problems to be solved, sickness as personal failure, suffering as moral inferiority—we block grace.”

This Is, Indeed, Our Moral Issue

In other words: This is, indeed, a moral issue—and a matter at the core of our faith—that should be openly discussed in our congregations. Our acceptance of an American healthcare system that, by its very structure, dooms millions to disability, death or a lifetime of debt shows that people of faith have ignored the moral underpinnings of that system for too long, Finnegan-Hosey argues.

This is a bitter irony for faith leaders who know that, over many centuries, religious communities in various parts of the world invented our healthcare systems. Right now, it’s crucial for congregations to reclaim our traditional role as advocates for health and wellbeing. Right now, it’s crucial to begin talking, studying, praying and building a national momentum for change, he argues.

What’s more? Finnegan-Hosey predicts that the situation will get far worse as the astronomical U.S. national debt from this pandemic already is driving fiscal conservatives to consider a host of legal measures to cut even more gaping holes in the healthcare safety net.

What should congregations and individuals be doing now? In a new email as we were preparing this story, Finnegan-Hosey writes, “Don’t advocate for policies like taking away protections for pre-existing conditions, preventing the expansion of Medicaid, and cutting community mental health budgets, and then suddenly pretend to care about mental health.”

How To Use This Book with Congregations

We turn, now, to the Rev. Joel Walther, pastor of a United Methodist congregation in southeast Michigan, who has taught many classes and led many small groups. Walther is a long-time colleague of Finnegan-Hosey and was part of our earlier ReadTheSpirit Cover Story about Christ on the Psych Ward.

We asked Walther to describe how he might introduce this book to a congregation:

One of the greatest gifts in David Finnegan-Hosey’s writing is its easy accessibility for study in small groups. I would strongly encourage you to consider studying Grace is a Pre-Existing Condition with some small group of which you’re a part.

In religious settings this could be a Sunday school class, a women’s or men’s group or a couples’ group. In a secular setting it could be a book study, or a quilting or knitting group. Studying a book lends itself naturally to a group that already tends to study things, but this book addresses such an important topic that I suggest things like knitting and quilting groups because I think it would be a great opportunity to engage people in discussion of these issues.

The urgency of this particular book may give you a chance to revive a group that hasn’t been meeting during the pandemic. You can set up a virtual meeting through a conference call or a video conferencing program like Zoom, Google Hangouts/Meet or Webex.

This is a time to be creative! A group could even set up an e-mail or Facebook group and engage in discussion through e-mail or posting.

For those who are resistant to studying books because they feel their time is too limited to read, Finnegan-Hosey’s book is brief but deep. No one need worry about lengthy chapters that are a challenge to finish. His writing is approachable, honest, fun and engaging. This is easy reading guaranteed to spark good discussions.

This need not be a long commitment. There are nine chapters, so you could spend nine sessions—but his book also could easily be broken up into three parts. A group could spend just a few weeks discussing the book. I’d suggest tacking on one extra week where, after having studied the material, the group challenges one another to act in some way on what they’ve learned and to report back at the final gathering.

Finally, if you happen to be a religious leader this is easily broken down into a series for teaching, preaching or use in your weekly newsletters for the congregation. It would be a wonderful way to engage a religious community around a pertinent subject and challenge them to make visible change in our world around the issues of health care and health insurance availability in particular.

There’s a lot of good work we can do together to meet these crises that so many of our families are shouldering right now.

And, Torn from the Headlines … 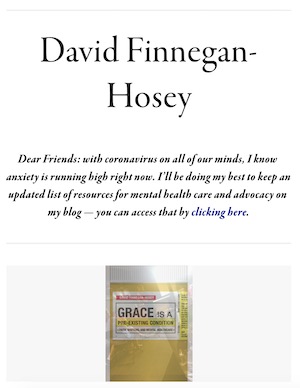 As we prepared to publish this cover story, we asked Finnegan-Hosey to help us gather some recent headlines about these issues—to help you share with friends the urgency of this discussion. His best suggestion was a link to his own website: https://davidfinneganhosey.com, which is packed with resources. His blog posts and social media updates often direct readers to up-to-the-minute headline news on these issues.

One of the most widely shared reports in early May is headlined: One Thing the Pandemic Hasn’t Stopped: Aggressive Medical Debt Collection. This link takes you to the Mother Jones magazine version of the story.

Many congregations and other groups nationwide have learned about ways to dramatically pay off existing debt at pennies on the dollar—helping to free countless families from these debts. Here is one story about the Massachusetts Nurses Association helping to free nearly 700 families.

The problem is growing dramatically.

On May 15, TIME magazine reported: “As of May 2, nearly 27 million Americans could potentially lose their employer-based health insurance amid the coronavirus pandemic.” TIME then described options such families could consider.

Also in early May, the Pew Trusts published an in-depth look at how debt collection is transforming the court system—often involving cases where an attorney representing a company is taking action against individuals who have no legal representation.

On May 12, the National Alliance on Mental Health updated its 24-page, downloadable COVID-19 Resource and Information Guide.