I have always struggled with gratitude.
I want to be grateful, but too often I find myself with no thanks.
Diana Butler Bass in the Prologue to Grateful 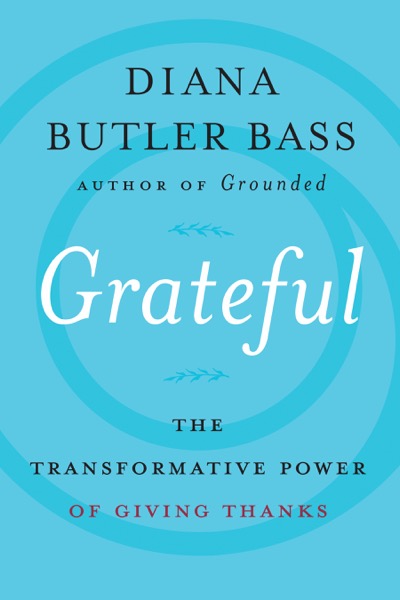 Nearly everyone feels grateful—or so we’re told in a national study by Pew researchers that Diana Butler Bass describes in the opening pages of her new book, Grateful: The Transformative Power of Giving Thanks.

So, if you don’t feel grateful most of the time—do you find yourself feeling like a failure? Diana admits that’s how she feels sometimes—like “a gratitude klutz.”

Whether you’re a klutz or gratefulness devotee, we all can admit that Diana’s book is timely! There’s no idea as popular—and as misunderstood—as gratefulness.

Why is gratefulness confusing? Because, for more than a century, Americans have been unable to decide whether being grateful is about other people and the larger community—or all about ourselves and our personal desires. That confusion arose again a dozen years ago, when America’s perennial positive-thinking movement resurfaced like a volcano in the mega-hit movie and bestselling book, The Secret.

Mitch Horowitz, the leading expert on America’s long fascination with positive thinking says the explosion of interest in The Secret was as American as Apple Pie. Mitch traced the content of The Secret back to bestsellers a century ago like The Science of Getting Rich and many others. The idea behind these books is that if people focus on gratefulness and visualize what they want—their desires will be fulfilled. In the midst of fads like The Secret, the gratefulness gospel seems to be all about “me” and “getting mine.”

Readers can be forgiven for mistaking Diana’s new title, Grateful: The Transformative Power of Giving Thanks, for a repackaging of The Secret—unless you are already familiar with Diana’s body of work. Her name on the book’s cover should immediate signal to readers: This book is the opposite of The Secret!

Diana leads us away from the world’s selfish messages about spirituality. Our spiritual values are not guarantees of a happy life, she says—but they are the pathway toward building healthier communities. At one point, late in the book, she even lashes out in exasperation at the “anger and division” mounting in our world. “Rarely have I felt more out of sync with the world around me,” she writes.

Gratitude is not some kind of get-rich-quick magic formula. She writes, “To be grateful in these days is an act of resistance, of resilience, of renewal. … The politics of gratitude is a way of healing and compassion—perhaps even salvation. I invite you to the journey from ingratitude to gratefulness and to find yourself part of a like-spirited community. You are not alone. There are many on the road.”

Now are you intrigued?

As Diana has done throughout her career, in this new book, she is urging people to rethink their religious and spiritual assumptions. This is a book full of provocative and inspiring ideas that makes it terrific reading for anyone trying to preach or teach or lead a small group in this anxious era in which confrontational voices seem to be surrounding us. This book is an invitation, a pathway forward.

The starting point of this book is America’s enormous fascination with gratitude. So, how much are we attracted to this idea? As Diana explains in the opening pages, Pew researchers have documented an overwhelming American fascination with the idea.

“This Pew study came out a couple of years ago,” Diana said in an interview. “I was working on this book long before Donald Trump was elected president and before the #MeToo movement and yet, as this book was going through the final stages of preparation for publication, I realized that this book is very timely on a number of levels.”

Diana often is prophetic. She became famous as a scholar of American religious life—the subject of her doctorate research at Duke University. Most of her earlier books are about the complex history of faith groups and contemporary trends in spirituality. That expertise led to invitations to write for The New York Times, Washington Post and Huffington Post—and is why she is popular nationwide as a speaker and  teacher.

“So the back story on Gratitude is that I had finished my earlier book Grounded and I left this question on the table for readers: So, if God is embodied in the world of nature and neighbor, then how are we supposed to act in such a world? And, I thought I should develop more in response to that question, particularly about character. What character should we aspire to develop in such a world? Or: What does our character look like if we really do love God and our neighbors as ourselves?

“I presented the idea of writing about character to my editor and he asked me: ‘How many items are already on your list when you talk about character?’

“I said, ‘Nine. And I began to list them—kindness and mercy and joy and so on.’

“He said, ‘That’s more than one book. Take one thing from your list and turn it into a book.’

“Finally, I accepted that and said, ‘First, I’ll do a book on thanksgiving or gratitude. This is a part of the moral life that is important in empowering us along the pathway of doing justice in the world. And, at the same time, I think gratitude is so misunderstood, these days.”

Want evidence of that confusion? Consider that The Secret has sold more than 20 million copies with a message about gratitude that is quite different than the traditional understanding of this virtue in the world’s oldest religious traditions.

Diana agreed in our interview, “I would say that the biggest source of confusion when Americans think about gratitude is that we associate gratitude with getting stuff and having stuff. That’s what the secular prosperity gospel preaches. That message tells us: We should be grateful because we are achieving material success.

“In my book, I describe the idea of gratefulness that is foundational to the Hebrew scriptures, the Christian New Testament, Buddhism and Islam,” she continued. “This idea of gratefulness comes from a different place. The first true thing about every life on earth is that we are receivers. We have received the greatest gift of all and that gift is life itself. Everyone of us was born—and then someone took care of us for a long time. If you’re a human being on this planet, our traditions call us to recognize that we can never hope to receive a greater gift than our lives and those early years of care.

“Every religion teaches us that we should be aware of our humble origins and be shaped by these gifts we were given. Most people of faith believe that God is a part of that picture and that God is the source of these gifts. And we’re not talking about a stingy God—we’re certainly not talking about an accumulation of stuff you can order on Amazon. No. We’re talking about gifts of God that are as fundamental and powerful as an infant taking its first breath.” What makes this book so pragmatic—so full of helpful insights for most readers—is that Diana is determined to explore even the toughest, darkest questions about gratitude. She has little patience for the all-too-common spiritual double-talk of well-meaning pastoral figures who want to smooth over the thorniest issues with sweet-sounding God talk. However well-meaning, that kind of teaching and preaching can lead to a “therapeutic and theological gerbil wheel,” she writes.

The heart of this book is Diana’s search for deeper answers that really work. For example, for the first time in her long career as a writer, Diana reaches back into her own life and explains to readers that she was sexually abused as a 14-year-old girl by an uncle who appeared to be a good Baptist to the rest of the world. Anyone who has encountered such trauma early in life will immediately understand the dilemma this causes when considering the prized virtue of gratefulness.

Be grateful for what!?!

As Diana writes, “What if you are angry because you have been violated and no one protected you?”

Putting this section of her book in context, it’s 7 pages out of more than 250. In writing this section, Diana simply explains what happened to her and then invites readers who also have shared trauma in their past to wrestle with her through the conflicting emotions that are the legacy of trauma.

“The first thing I want to say about my decision to share that story for the first time is that I had made my decision before the news broke about Harvey Weinstein and the #MeToo movement arose,” Diana said in our interview. “So, my decision was not prompted by that movement, although I certainly support what’s happening now. I chose to include that story here because I think there are too many books on gratitude by successful, privileged people who have never personally suffered any real injustice or trauma. In fact, my place is not up on some pedestal of privilege. My place is sitting right there at the table with others who have suffered—and who know that gratitude is not some easy thing. In fact, if you have suffered real trauma, you know that people telling you that you have to be grateful all the time can really turn gratitude into a kind of bludgeon.”

TAKING A SEAT AT THE TABLE

Taking a seat at life’s table becomes a metaphor for people gathering to live and share and work together in a cooperative circle, Diana writes in the book.

The notion of gratitude acting as a spiritual magic trick to produce a shower of money and earthly goods ultimately looks a cheap substitute for real gratitude. “Gratitude really is a path of self discovery as well as communal discovery about our place in this world,” Diana said in our interview.

“Ultimately, gratitude is the sharing of good with others wherever we are, sometimes simply because we still have life and breath left in our bodies—and we still have the ability to act with compassion toward others and to create justice together. In that pathway, gratitude becomes the capacity to stand up in the face of fear and despair and sorrow and say: We are people alive and breathing here. We are together at this table. We have the capacity to resist those forces that would take life away from us and, together, we can keep passing gratitude into the world.”

VISIT DIANA’S WEBSITE—The Web address is simply DianaButlerBass.com, a site where you’ll find lots of resources, including her calendar of upcoming events.

‘GROUNDED’—In 2016, Diana published Grounded, a book she described as a personal departure from her earlier writing. We published this interview with Diana as the book was released. Then, Ann Arbor-based Christian educator Debbie Houghton collaborated on a five-part Discussion Guide to Grounded. To explore that free Guide, here are links to Part 1, also to Part 2, and Part 3, Part 4 and finally Part 5.

‘CHRISTIANITY AFTER RELIGION’—Readers still come to our online magazine to read this 2012 interview with Diana about her book on the future of Christianity.

VISIT OUR BOOKSTORES—You’ll find lots of books that explore religious and cultural diversity in our own ReadTheSpiritBookstore and our new Front Edge Publishing Bookstore.