EDITOR’S NOTE: The most common question our writers have been asked, whenever they make appearances in congregations is, “How can we grow?” Most Americans now are well aware of the nearly 1 in 4 Americans who tell pollsters they have no religious affiliation. Weekly attendance remains popular for millions of Americans, and some congregations are booming—but, overall, weekend attendance is declining.

This week, we are pleased to share some good news about a creative trend. 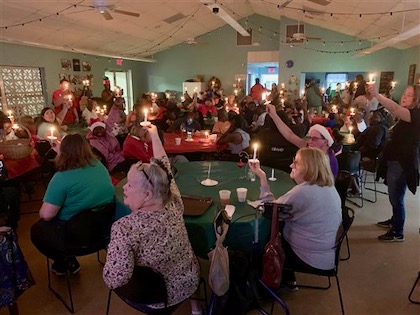 A dinner church in Florida.

This spring, people of faith have been gathering around tables.

In April, Christians had Communion on Maundy Thursday, remembering that Jesus broke bread at the Last Supper and said, “Do this in remembrance of me” (Luke 22:19). Jews had Seders in their homes as a part of Passover, eating symbolic foods as they remembered the Exodus from Egypt. And in May, Muslims are fasting for Ramadan and then breaking their fasts with family members and friends at festive iftars at the end of each day.

In all of these observances, people are practicing their faith by eating at a table.

While shared meals have been part of the religious practice of numerous groups for thousands of years, they are being given a new focus in Christianity through the “dinner church” movement—churches that have a shared meal at the center of congregational life.

These communities of faith are discovering the truth of an observation made by Harley Camden, the fictional Methodist minister in my new mystery novel City of Peace, who says, “Think of how much better the world would be if people actually sat down and ate with each other.”

Harley Camden is imaginary, but Methodist dinner churches are not. In the Florida Conference of the United Methodist Church, a dinner-church initiative called “Fresh Expressions” is gaining ground across the state. With a focus on simple meals and conversations around tables, the conference will launch 55 new dinner churches by September 2019, offering meals in venues ranging from community centers to public school cafeterias to outdoor parks. (Here’s a column from Florida United Methodist Bishop Ken Carter going into more detail about how this program sprang up in his state.)

‘We Will Feast: Rethinking Dinner, Worship …’ 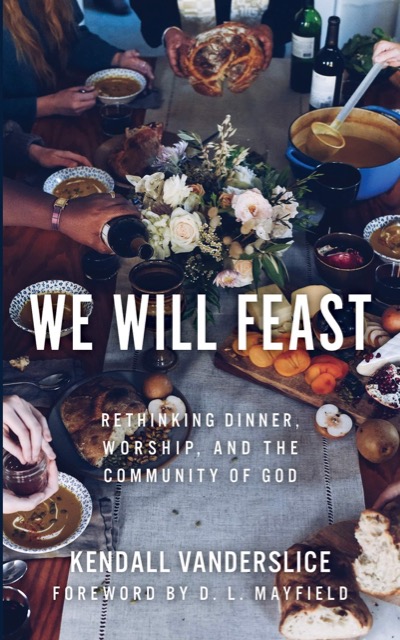 “Fresh Expressions” is part of a larger movement that has been studied by Kendall Vanderslice in a book Eerdmans is releasing this week called We Will Feast: Rethinking Dinner, Worship, and the Community of God.

To write the book, she spent a year visiting dinner churches across the country, and discovered that in all of these congregations, relationships deepened as people ate, prayed and talked together. From Saint Lydia’s in Brooklyn to Garden Church in San Pedro, California, she found that dinner churches satisfy two basic human needs: To be nourished by food and to find companionship with one another.

To the book, Vanderslice brought experience in the restaurant industry and expertise as a baker, combined with a study of food at Boston University and theology at Duke University. She discovered:

In all of these congregations, stomachs are filled and Jesus is believed to be present at the table.

A Future of Food and Faith?

Will dinner churches become the new model for churches everywhere?

The model is likely to spread, but dinner-based congregations certainly won’t replace existing churches. Think of this as one of many creative models churchgoers are sharing across the grassroots. Barbara Brown Taylor just closed her new book, Holy Envy, with a vivid description of a congregation that meets in a public park.

In a Christian community torn apart by theological debates, these fresh ideas are opening new doorways to new spaces where the faithful can gather. Dinner-church services offer the possibility that the Body of Christ can be unified through the sharing of bread.

Churches across the country can benefit from gathering people around tables to be nourished in body and spirit, in meals that help people to grow stronger as individuals and as a community.