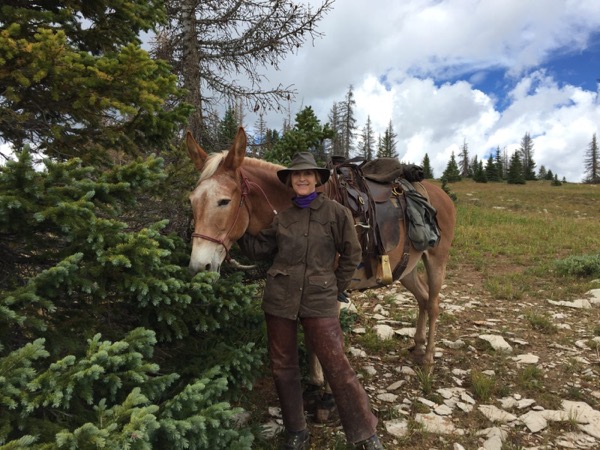 Dr. Karlene Stange in the realm she loves. (Author photo used with permission)

“I set out to understand the spiritual nature of animals and, in so doing, I discovered my own.”
Dr. Karlene Stange in The Spiritual Nature of Animals 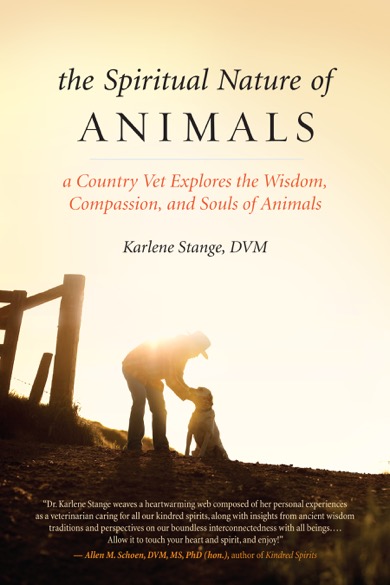 Imagine if James Herriot, the man behind All Creatures Great and Small, and Joseph Campbell, the famous mythologist, wrote a book together. The result would be something like The Spiritual Nature of Animals: A Country Vet Explores the Wisdom, Compassion, and Souls of Animals.

Dr. Karlene Stange writes like she’s channeling both methods of exploring the world: the adventures of a rural veterinarian paralleling the reflections of a scholar of religious traditions. Here is a passage from early in her book to give you a feel for the adventure that lies ahead if you choose to read her book:

Creatures great and small dragged me down a rabbit hole and through sacred tunnels into a world of dragons, shamans, gurus, lamas, monks, nuns, demons, priests, rabbis, preachers, scientists, clairvoyants, channels, mystics, animal communicators, and spiritual teachers. Those adepts schooled me and gave me refuge from the dramas and trauma overburdening me. They introduced me to the ‘anima’—what Jungian psychology refers to as the animating principal present in all living things.

Anima is the Latin root of the word animal. It means soul, breath, and life. Veterinarians share a personal relationship with the anima; we watch it drain from a body only to meet it again as a newborn foal or pup. Yet veterinary education rarely mentions it. We learn detailed information about bones, blood, and the other physical components, but little is said of the nonphysical aspect—the animas of animals. I now believe it is the most important part.

Karlene has her own web address for related information that begins with her preferred term animas: www.AnimasAnimals.com There you will find information about her veterinary practice as well as some some unusual recipes for dog treats, including a Fish Quiche for Dogs that frankly looks like humans might find it delicious, and even an Essential Oils Fly Repellent.

Clearly, Stange loves to share what she is learning from people around the world. Among her other passions are speaking and teaching about what she has learned to groups of people who care for animals, particularly other vets.

Starting with the Science

Of course, Karlene addresses the basic questions we all have: Are animals even “conscious” in a way that makes them more than engines of instinct and natural desires? Is there even a basis for considering animal spirituality? Her book offers lots of persuasive findings from pure scientific inquiry about the complex psychological and social lives of animals.

Among the scientists she cites in her book is the biologist Bernd Heinrich, a specialist in studying birds. Summarizing his contribution briefly for her readers, she writes: “Heinrich defines consciousness as ‘the mental visualization of alternative choices that then guides judgment of new situations at the moment.'”

She concludes, along with Heinrich: “One must always bear in mind that there is no way for one being to truly know what is going on in the mind of another. Even though we may not recognize consciousness when we see it, denying its presence seems premature.” Then she quotes Heinrich, “Dismissing the mind because one cannot personally prove it with precision by a simple test or device is like the denial of the role of inheritance before genes were elucidated.”

She also cites the prolific work of Marc Bekoff, who has been featured in several ReadTheSpirit magazine interviews over the past decade. Here is one example from 2014, when Marc talked with us about his book Why Dogs Hump and Bees Get Depressed.

In our interview, Karlene said, “We’ve been so stubborn about our human egos being in charge and not looking at some things that are just obvious. Of course, animals feel emotion. Darwin wrote about this more than 150 years ago. It’s time to let go of our vain perception that we’re so superior as humans and start looking at the point, as Marc points out, that animals have emotions and they perhaps have morals.”

As a trained scientist herself, Karlene echoes what Marc and many other pioneers in this field have been arguing—despite sometimes strident opposition from others in academia. “At first, writing, talking and teaching about these ideas was the subject of tremendous ridicule,” Karlene said. “People were in danger of being drummed out of their fields. For example, when Irene Pepperberg began her work she had trouble finding any funding. Finally, she showed what Alex the Parrot was capable of doing, even though his brain was the size of a walnut. Now, Alex is a poster child of animal cognition.

“These pioneers open doors for others. Now, we know Prairie Dogs have a language. We know bees can count. I recently emailed Marc and, in the exchange, I asked him, ‘Why can’t we all just admit these things and look at what’s possible and study it?’

“Marc said: ‘Because, then we have to look at how we treat animals, as well as other humans. It’s the same thing with racism and sexism. We feel we can treat others poorly only if we convince ourselves that they are somehow not worthy of us.'”

From Science to Spirit

What Karlene is bringing to the public conversation is a very compelling storybook for general readers—part memoir of her adventures as a country vet, part explorations of spiritual realms in her search for new insights. Her narrative is organized through these personal stories, which welcome us to Karlene’s world and allow her to guide us deeper. We encounter researchers as well as stories from the world’s great religious traditions.

Bottom line: Because of the storytelling style, it’s fun to read. In fact, you’re likely to enjoy discussing this book in your small group. In early 2018, watch for a discussion guide that Karlene plans to develop to help small-group leaders pose inviting questions to spark conversation.

The book opens with Karlene receiving an urgent call about a dying horse. On the day she received that call, Karlene tells us, she was having a particularly difficult day, so this emergency appeal was the last thing she wanted to hear.

Nevertheless, the old rancher was insistent: “Honey, if you don’t come, she’s going to die. She fell in the irrigation ditch this morning, and now she’s too weak to stand.”

In fact, this was a 3-day-old foal and the little horse could be saved, Karlene began to suspect, if only the foal could be treatment immediately.

Working out of her mobile vet-clinic-in-a-truck at that point, Karlene set aside her own problems that day and responded: “I’ll come right now.”

What happened next? Well, read the book. If this sounds like an episode of the still-very-popular TV series about James Herriot’s work, then you’ve got the idea. (And, by the way, Karlene is pleased at the comparison. She said in our interview, “Oh, I love the Herriot stories! And, I watched the TV series as a child. One of my highlights years later as a student was that I got to hear a talk by Brian Sinclair, who was the role model for the character Tristan Farnon.”)

Here at ReadTheSpirit, we wouldn’t be surprised if we eventually see a TV series about Karlene’s work—and her larger exploration of cosmic connections. That’s what distinguishes this book from the countless other volumes and TV series about vets, which cascaded like a waterfall into popular media after the Herriot books became a global sensation in the 1970s.

In Karlene’s opening story about the injured foal, she introduces the subject of animal emotion. But her step into spiritual spheres really comes in the book’s second story about a call from Margaret, a dog owner who describes herself as a “Catholic Buddhist.” Margaret and her beloved canine companion are facing some agonizing end-of-life choices, made all the more complex by Margaret’s interwoven religious traditions.

In the book, Karlene writes, “It took several days to grasp the meaning of the relationship Margaret had with her dog, the religious implications of the final days, and how to best help them both.” What happened next? Well, read the book. At this point, you get the idea. Karlene weaves stories with spiritual insights to craft very compelling prose.

Opening up the Spiritual Realms

Over more than a decade of weekly publishing here at ReadTheSpirit magazine, we have often posted Cover Stories about the growing interest in the spiritual lives of animals. In fact, waaay back in 2007, one of our earliest Cover Stories was a two-part interview with Tony Campolo headlined: A Conversation with Tony Campolo … The Spiritual Lives of Animals. From his perspective as an Evangelical with a capital “E,” Campolo was arguing:

All of this is part of the fact that as we move into a postmodern era, there is a rediscovery of dimensions of spirituality that got lost in the modern era. In the modern era, anything that could not be reduced to empirical data and logic was discounted. Now, all of a sudden, we find ourselves in a new place. It’s a place wherein there is a sense that there is more to reality than what can be ascertained by empiricism. We need to tap into that which transcends. We are not just into physics anymore. We’re into metaphysics in the postmodern era. … John Wesley understood that we have a connectedness with animals. C.S. Lewis was also aware of this. Lewis wondered how certain people could be in heaven—truly in heaven—unless the animals they loved and who loved them were there in heaven with them. Read Lewis. I think he argues this point more convincingly than I do.

So, for our readers who are still scratching their heads and wondering if Karlene Stange’s book could fit into a small-group reading schedule in your congregation—and there are millions of those small groups in churches nationwide—we are saying: Yes, indeed, it could. What’s more? There are many voices in contemporary Christianity saying the same thing.

In her pages, Karlene opens up all kinds of connections, beyond the Christian links Campolo and others lift up. The second major section of her book invites us to travel around the world with her for vivid examples of creation stories. She begins in the American Southwest with the Hopi, then takes us to Australia for an Aborigine understanding of the world’s origins, from there to the ancient Hebrew creation stories—then on to African traditions. In other words: This is where the James Herriot persona moves over into the passenger seat and the Joseph Campbell voice drives for a while—as these two intriguing viewpoints bounce back and forth, becoming dual tour guides helping us to circle our planet.

“I hope readers come away from this book with a new appreciation for the amazing cycles of life all around us,” Karlene said in our interview. “I hope they see our connections with those greater cycles in new ways. I want people to have a different perspectives on the animals around us so they might relate to them in a fuller way. If we open ourselves up to these ideas, then it’s really a chance to discover something amazing about the lives around us.”