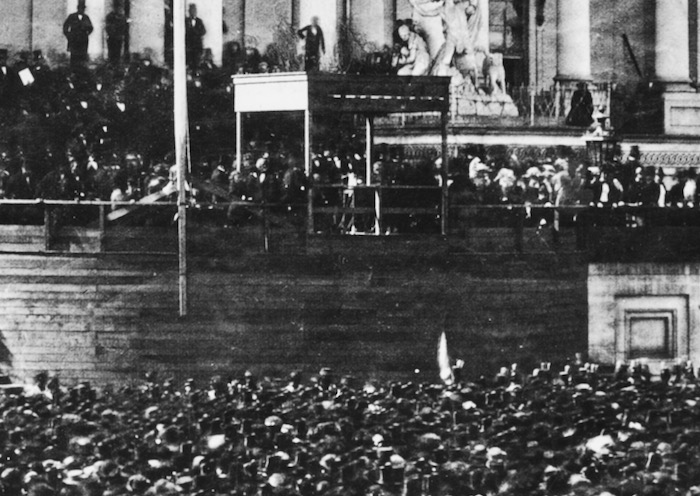 Lincoln’s first inauguration in 1861. He stands in the middle of he small crowd under the wooden canopy. Only a small patch of his white shirt can be discerned between the middle two pillars of the canopy. (Another view of the scene is below.)

Here’s Lincoln quote for you: “I would rather be assassinated on this spot than surrender it.”

Another view of the same moment. Cranes are visible on the roof, continuing the construction of the Thomas Walter-designed dome, which was not finished until 1866.

As President–Elect, Lincoln is on his way to D.C. to be inaugurated and is speaking early on the morning of February 22, 1861, on George Washington’s Birthday, in Old Independence Hall, Philadelphia, where he is to raise the flag.

To Lincoln this is a sacred event, at a sacred place. Philadelphia was our first capital, Independence Hall our first Capitol building.

His new guard, Alan Pinkerton, had told him he definitely could be killed that morning. They had tracked down multiple assassination plots. Yet Lincoln insisted that he be at Independence Hall on that morning, to raise that flag, to celebrate his boyhood hero, George Washington, and to do all in this first American capitol building.

It was there that he interrupted his prepared speech to say, “I would rather be assassinated on the spot than surrender it.”

“It” is the flag, the ritual event and place, and most, the country dedicated to the world-wide principle of liberty for all. To be there was more than rational. His emotions, the meaning of his words, the potential sacrifice, all add up to the theme of this program: the spiritual life of Abraham Lincoln.

What did the building and the flag have to do with it?

Lincoln’s speech begins, “I am filled with deep emotion at finding myself standing here, in this place where were collected together the wisdom, the patriotism, the devotion to principle, from which sprang the institutions under which we live.”

He makes it personal.  “I have never had a feeling politically that did not spring from the sentiments embodied in the Declaration of Independence.”

This is the spiritual life of Lincoln.

And that is when, after suddenly stopping and bowing his head, he adds “I was about to say I would rather be assassinated on this spot than surrender it.”

He would rather lose his life than lose a country that lost its liberty and what that liberty means to the people of the world for all future time.

Later that day, Lincoln, at the State Capital in Harrisburg, speaks with light humility to the General Assembly about his role in that somber early morning event in Philadelphia. He says that he was allowed the privilege of standing in Old Independence Hall. He says, “our friends had provided a magnificent flag of our country.” And that he had been given the “honor of raising it to the head of its staff…and that he was pleased that it went to its place (there) by the strength of my own feeble arm.”

Now we know from his axe-holding demonstrations that his arms were anything but feeble. But he is humble about this ritual, this place, the flag.

What is it about flags?

You know as kids we play capture the flag. Obviously it isn’t the flag we want but what it means to be able to capture it. I knew a woman in Belfast whose father had a piece of his father’s American flag. Having been captured in battle on the first day at Gettysburg his unit had torn up their flag and each hid their piece of it so that the Confederates couldn’t get it. They promised to reunite the flag if they lived.

America planted the first flag on the moon. At military funerals a spotless new American flag is draped over the casket and then folded into a tight triangle and given to the family. Flags are signs by which we symbolize sacred values. For Lincoln he hoped it would represent the value of liberty for the people of the world.

A theologian, H. Richard Niebuhr writes this using the images of the flag: “The Puritans, Pilgrims, Quakers, with their associates, were first of all loyalists. They were loyal…(to what they considered)…to use (G.K.) Chesterton’s phrase, the ‘flag of the world’; they were convinced that this flag represented power and law as well as benevolence in which men could trust when they had lost confidence in their own good will and in that of their…” church and state. They were protesters and dissenters only because they desired to be loyal to the government of God” he writes, “and that was their positive unifying allegiance, despite their many quarrels.”

Lincoln concluded his remarks at the Pennsylvania capital praising the cooperation of the people who arranged the flag raising event, of which he said he was their humble instrument:

“And if I can have the same generous cooperation of the people of this nation, I think the flag of our country may yet be kept flaunting gloriously.”

That was his invitation then, and can be to us now, so that like Lincoln, we can be lighted down in honor to the latest generation.