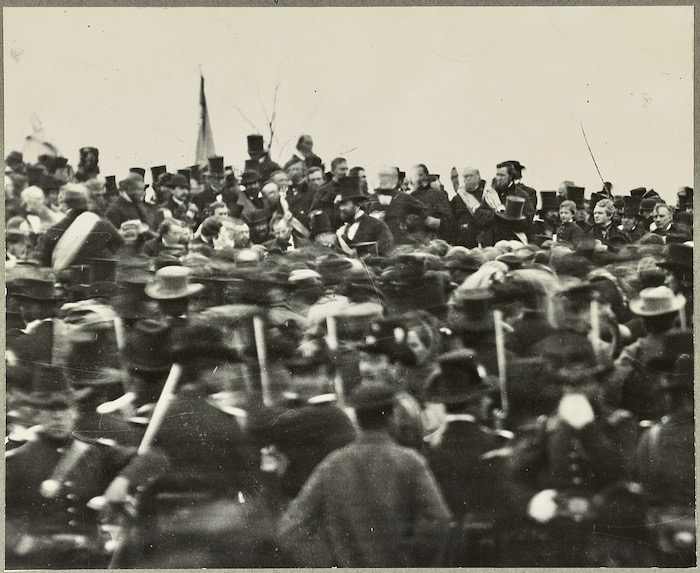 WHAT A POWERFUL PHOTO! This is one of only two confirmed images of Lincoln on the day he delivered his Gettysburg Address in 1863. The power of the photo certainly doesn’t lie in its visual clarity of Lincoln himself—it lies in the visual truth of the overwhelming forces surrounding Lincoln at this time. This photo was taken just as Lincoln was arriving, hours before he would deliver his address. He appears here without his trademark stovepipe hat, bareheaded and looking downward, right in the middle of this vast sea of people who are almost submerging him in the press of bodies.

Closeup of Lincoln from the photo above.

Here’s a Lincoln quote for you: “It is rather for us to be here dedicated to the great task remaining before us—that from these honored dead we take increased devotion to that cause for which they gave the last full measure of devotion—that we here highly resolve that these dead shall not have died in vain—that this nation, under God, shall have a new birth of freedom—and that government of the people, by the people, for the people, shall not perish from the earth.”

These are lines from Lincoln’s address at Gettysburg, the battlefield that was the high-water mark of the Confederate rebellion, and the beginning of the ebb-tide of civil war. It was a victory, not so much by the Union—but in Lincoln’s mind, for the Union.

This Thursday, November 19, 2020, is the 157th anniversary of the Gettysburg Address.

On that day it was unusually warm. The trees were newly bare of leaves; fall was in the air in Pennsylvania. It had been rainy and grey. Lincoln had a black band on the tall hat he brought with him for the address, a memorial for his favorite son Willie. Lincoln carried his own real grief over a lost son with him to that graveyard dedication of a nation’s grief over their lost ones.

Grief was in the air. The trees were stark, not only because of the changing season, but from canon fire that had shot off branch after branch in the huge artillery barrage that had opened this turning point battle in a war. The war had cost well over 600,000 lives. That would translate, as a per cent of the U.S. population, to more than 6 million now. Everyone was being touched by suffering and death.

The message that Lincoln brought with him was that this suffering and these deaths were not an end but a beginning—a truly spiritual message: Out of suffering and death we find and see new life. He said: What you see—the cemetery—tells you there is something beyond the grave yard. That is spiritual talk.

When we re-read his 272 words, we find subliminal poetry—and it is all about birth: conceived, brought forth, birth and rebirth. All the major verbs and nouns reflect this generative feminine motif. To him the killing field can most deeply be seen and felt as a birthing place, not to glorify war and death, but to see glory and new life in the honor and dedication to a high ideal sacrificed for on that ground. That ideal was, in Lincoln’s mind, and then in so many hearers’ minds ever since, the idea of freedom and its soul-mate, equality.

Lincoln goes back to the birth certificate of the country. 1776 and the Declaration of Independence. All men are created equal. That was what was stamped on the certificate. That is the freedom that self-government is for. It’s not for just ourselves, it’s for everybody. The country, too, needs liberty to be itself.

The date on the birth certificate of America was important to Lincoln, and it had yet to be certified. Some said it could have been 1787 when the Constitution was written and adopted. Lincoln was a lawyer. He was guided by the Constitution. But that, to him, was the text book, the hand book, not the birth record. The law was important. But the inspiration for the law—freedom and equality—was more important.

Nor did he go back, we can conjecture—to 1619 and the first English settlers in Jamestown and the first slaves brought to these shores, racially identified slaves. Lincoln hated slavery. He had seen bound slaves, tied like fish on a line—and had seen the corruption that comes when you make people into property. But that offense, the offense from 1619, was not his message. He was to say soon enough in his Second Inaugural Address, that that offense, which was so rank even to God, had been equally shared by both North and South. Slavery was American, not Southern, and it had been paid for by our blood.

We did not have to re-punish the wrong doer. Lincoln was not a religious fan of the idea of Original Sin. We were not born bad. And it was, as Jesus had said, not ours to judge others. We did not have to argue everyone into accepting their guilt and to take our version of punishment—although there were radicals within his party that thought the righteous North should punish those who cared had so much about their property, the slaves, as to destroy the country. That was not our task. Lincoln really did believe in God by this point in his life, and he really did say “that this nation, under God….shall have a new birth of freedom.”

To this day, Lincoln’s words are still lighting people down in honor, around the world, not just Americans, but as people wanting to be reborn, free and equal, down to the latest generation. In other words, forever.
This is Duncan Newcomer, and this has been Quiet Fire. The spiritual life of Abraham Lincoln.