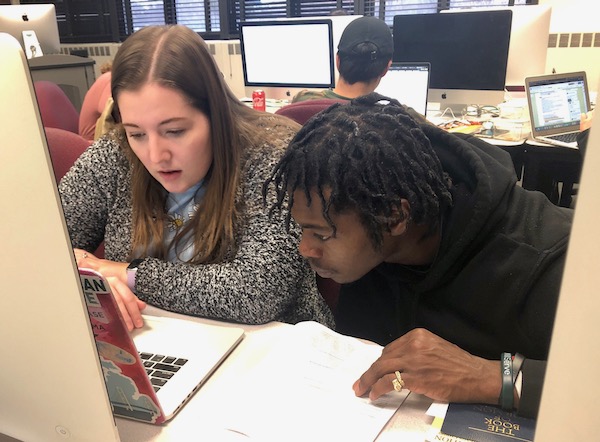 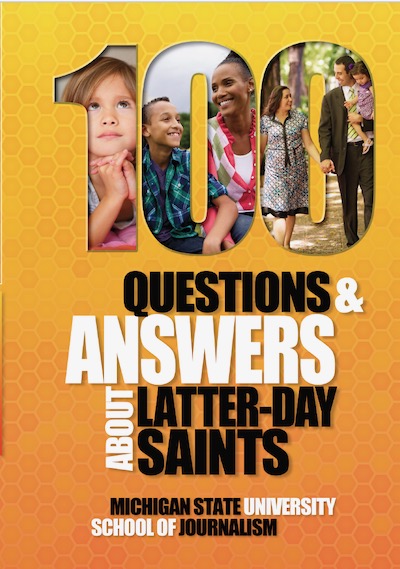 Click on the cover to visit the book’s paperback page on Amazon. The book also is available in the Kindle eBook format. If you would like to see all 18 books in the MSU Bias Busters series, visit Amazon.

At the 200th anniversary of the earliest origin of The Church of Jesus Christ of Latter-day Saints, a new book by the prestigious Bias Busters team at the Michigan State University School of Journalism answers 100 common questions about this uniquely American religious movement. Following the rigorous practices the Bias Busters have used in researching their entire library of 18 books, this new volume was prepared through extensive interviews and research with Latter-day Saints. Members of the church welcome this new book, because—even as they approach their bicentennial milestone—Latter-day Saints still are trying to overcome old myths and stereotypes.

As readers explore this guide, they will learn that Joseph Smith’s original revelation in 1820 led to the formal founding of the church in 1830.

“It was very important for us to include this book in our series, because this is a 200-year-old American religious movement that still is misunderstood by most Americans,” said the founder and leader of the Bias Busters project, MSU School of Journalism professor Joe Grimm. “The church continues its work around the world laboring under stereotypes and misinformation today about things that either never happened—or that happened far in the past. Polygamy is the biggest myth. Early in the church’s history there was polygamy, but that ended more than a century ago. Still, polygamy continues to show up in popular culture—TV, magazines, novels and so on—but these stories from break-away groups. So, it can seem confusing, but the church has condemned polygamy for more than 100 years.

“Another big myth is that the church is racist because they don’t allow Black members to enter the priesthood. That hasn’t been true for more than 40 years. That changed in 1978. The church has come a long way. Just a week ago, the 88-year-old Dallin Oaks, who is next in line to lead the church, gave a talk supportive of ‘Black lives matter’—and made headlines for doing that. There are a lot of surprising things about this church in 2020.”

While disavowing racism in an ongoing series of statements and teachings, the church still is working toward full racial inclusion. As of 2020, for example, no Black member has made it into the top-ranking Quorum of the Twelve Apostles. Someday, that may come. Black members now serve in regional and national leadership roles in the U.S. In its global expansion, the church also has active congregations led by Africans in 34 nations across that continent.

Global Gifts of the LDS Church

That’s a very long way from the church’s origins in western New York in 1820. Among the dozens of new religious movements that sprang up on the richly independent American soil in the 18th and 19th centuries, most reached their zenith with a relatively small membership and then disappeared. The Latter-day Saints are unique in surviving for two centuries, thriving and growing into one of the world’s most influential religious groups.

One reason is the church’s outreach in helpful ways beyond the boundaries of its own membership. Among the many widely acknowledged gifts of this church are the extensive genealogical resources offered to anyone who wants to learn more about their family history. The church’s online resources rank among the most successful and widely used among religious websites globally. The main LDS website routinely gets more user traffic than the Vatican’s website, for example. As part of their outreach, LDS staff and volunteers offer their online expertise to help other community groups and nonprofits.

The church also is widely respected for its expertise in helping the needy from providing emergency food to employment counseling. Even beyond their own membership, LDS volunteers use their expertise to help other religious groups and nonprofits organize feeding and emergency-aid programs. The church also strongly supports interfaith dialogue and the protection of religious minorities, having experienced persecution themselves.

Despite all of these positive signs of engagement around the world, myths continue to thrive and non-members don’t often seek answers when they encounter these stereotypes in daily life.

Bias Against the Church

From the start, the church has been marginalized and persecuted, largely by members of other Christian denominations. It has been called secretive, suspicious and even dangerous. Members, including founder Joseph Smith, have been killed.

In describing reaction to his publication of The Book of Mormon, Smith wrote, “my telling the story had excited a great deal of prejudice against me among professors of religion, and was the cause of great persecution, which continued to increase … men of high standing would take notice sufficient to excite the public mind against me, and create a bitter persecution.”

Among the common myths addressed in this new book:

Church Members Helped with the Research

Throughout the Bias Busters research and reporting, the LDS church opened facilities, provided information and made church members available for interviews. One of the most helpful was Karin Daines. She is public affairs representative for 11 congregations, a member of the boards of directors of the InterFaith Leadership Council of Metropolitan Detroit and WISDOM, Women’s Interfaith Solutions for Dialogue and Outreach in MetroDetroit.

Daines told the MSU team, “As you learn about our faith, we want you to know that we welcome your questions. Not only can they help your learning process, but they will enable us to understand your viewpoint and to hopefully create friendships and increase understanding.”

Understanding is one of the Bias Busters’ main goals. Among their other goals are justice and compassion.

Another ally from the church reflected on the pain he has felt from the arrows of prejudice. He wrote, “When our hyper-focusing on differences causes us to lose sight of our common humanity—and treat people as less than human because they’re not like us—we betray the ‘better angels of our nature.’ The world is less full of love, joy, and peace. Everyone suffers when one suffers.”

He wrote that he hoped the student authors “truly understood what it means to and for the groups that they portray … I hope they know that they have the power to make a difference by doing what they do and, especially, by doing it well.”

What’s in the new LDS Guide?

More of the MSU School of Journalism Bias Busters team working on this new book.

This guide is for people in business, education, religion, government, medicine, law and human resources who need a starting point for learning or teaching more about Latter-day Saints.

“These questions allow anyone with an open mind to take a journey from an interfaith or no-faith perspective into the lives of people deeply committed to their faith, doctrines, and a Christian walk of life.” says Dr. Joel Campbell, an associate professor in journalism in the Brigham Young University Department of Communications.

Some of the 100 Questions asked and answered:

This is the 18th guidebook to cross-cultural issues published by MSU students, educators and expert allies. The Latter-day Saints guide is part of a faith series-within-a-series, which has explored Jews, Muslims and Chaldeans.

Want to Get the Book?

The easiest stop is Amazon’s page for the paperback version. The book also is available in the Kindle eBook format. If you would like to see all 18 books in the MSU Bias Busters series, visit Amazon.