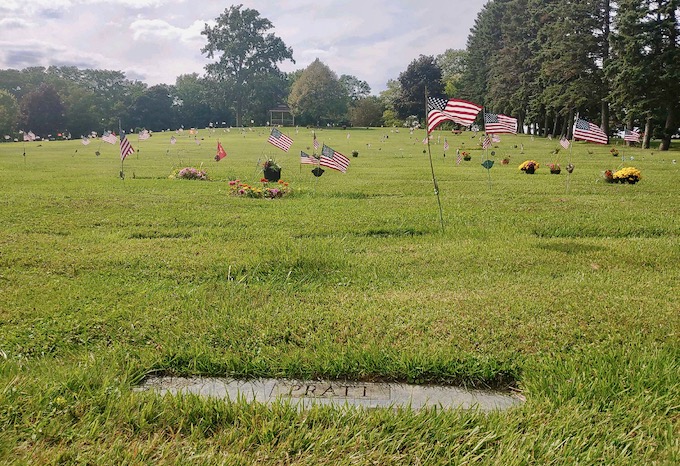 Baseball—
The crack of the bat,
The sweep of the curve,
The slide into second base.

My dad loved the game—maybe more than he loved Mom.

As millions of Americans step into October, each year, the liturgical season of baseball either brings elation or somber reflection on what might happen next year.

Filmmaker Ken Burns understood this kind of timeless spiritual yearning, calling baseball the “American Odyssey.” In his 18-hour documentary, Baseball, narrator John Chancellor tells us: “It is an American Odyssey that links sons and daughters to fathers and grandfathers, and it reflects a host of age-old American tensions, between workers and owners, scandal and reform, the individual and the collective. It is a haunted game in which every player is measured against the ghosts of all who have gone before. Most of all it is about time and timelessness, speed and grace, failure and loss, imperishable hope—and coming home.”

If we are true fans of the game, those words give us a little shiver, don’t they?

What that soaring description misses is that each American’s odyssey is as much a solitary pilgrimage as it is collective. Surely, you have your own.

And, this is mine. The memories and dreams all flowed back recently as I walked across my father’s final field.

My wife Judith and I had not visited my parents’ gravesite in a decade. Like Odysseus, we came back armed—packing grass clippers, fearing that we might need to catch up on 10 years of grave tending.

At journey’s end, we rolled our car to a stop along the lane through Laurel Hill Cemetery, Erie County, Pennsylvania. Got out. Stretched our legs.

Strolled across the lush green.

Sure enough, the grass had crept right over the evidence of his name and lifespan—Mom’s too, etched beside him in stone. I couldn’t help but think of Carl Sandburg: “I am the grass. I cover all.”

In that granite, now partially obscured, all that is left of these two people for the world to see is a few words and dates—the simplest of signs that, somewhere below that verdant expanse, lies:

Time has obscured so much. Yes, those are facts. But those weren’t their names. They were Ed and Jean to friends.

In Ken Burns’ potent phrase—”between workers and owners”—Mom and Dad lived their lives on the “workers” half of that balance. They labored so hard, and yet remained so poor, that I only made it into college because of a scholarship.

In fact, they were so poor that, despite my failing eyesight in high school, we had no money for me to afford an eye exam and glasses. There went my own baseball career! I will never forget a ball nearly taking my head off in one big game—a ball I never saw coming.

We were so poor that, for years, some of us slept in an unheated attic in a tiny house we shared with other family.

So poor, I told Judith, “I don’t think Dad could have ever afforded a ticket to a world series game when his beloved Pirates were playing.”

She shook her head. “Never heard any mention of a world series game.”

“During the regular season, I know he made it to the old Forbes Field more than once,” I said. “Remember that old story he loved to tell about going with his buddies, one time, and downing so many hot dogs that—”

“Of course!” Judith said. She has heard these tales far too many times, already, but she was game once more on this special occasion. “Fourteen hotdogs, wasn’t it? I think that’s how the story went.”

We looked at each other and smiled. The truth is: All too soon, given our own stage in life, there won’t be anyone left to keep telling that story.

The work at hand refocused our resolve. We stooped to trim the grave.

“One thing’s sure,” I said at length. “He loved baseball more than anything or anyone in life.”

Judith looked it me. That was quite a statement. She had heard me say that many times before, but it remains a startling truth. Dad loved the game—maybe more than he loved Mom.

As a young man in the Great Depression, Dad did whatever he could to survive. He hustled pool in the winter—and pitched semi-pro ball in the spring, summer and fall.

“His greatest dream was that I’d grow up to be a major league ball player,” I said. “Too bad we didn’t have the money to figure out why I was losing my eyesight.”

Judith, always the reality check, said, “Oh, and you think glasses was the only reason you didn’t turn into Willie Stargell or Barry Bonds?”

I chuckled. “But, that’s not the kind of baseball I’m thinking about right now,” I said. “I’m talking about the baseball in his blood.”

Dad grew up playing rough and eventually made it onto a semi-pro team sponsored by a gas company. He loved to tell about a game in the 1930s in a country field just over the Pennsylvania line in rural West Virginia—so poorly suited to the sport that a dirt road ran right through the diamond.

“No kidding,” Dad would say, “I’m talking right smack through the pitcher’s mound and home plate! If we heard a car coming, we had to pause the game. And that wasn’t the worst of it. The left fielder could not even see the right fielder, because there was a hill between them!”

He lived for baseball.

He paid the bills as an auto mechanic, which meant his fingernails always were tinged with black grease, no matter how hard he scrubbed. I can still see that left hand with the black-rimmed nails pressing a transistor radio to his ear, so that he could hear his Pirates play. When we moved from southwestern Pennsylvania up to Erie—blocks from the lake—he used to hole up in the attic to listen.

The truth was: He didn’t want anyone interrupting the best part of his week—those exciting adventures at the ball park brought to life by the creative narration of the Pirates’ Rosey Rowswell.

An extra-base hit wasn’t just a stat to Rosey. It was “a doozie maroonie!” Oh, he had a million of ’em.

And the best? When a Pirate slugged a home run, Rosey’s voice would soar as if yelling over his shoulder: “Raise the window, Aunt Minnie! Here it comes! Right into your petunia patch!” Then, we all heard it—the glass shattering! “Awww, that’s too bad,” Rosey would say. “Aunt Minnie never made it in time.”

I suppose there’s a prayer in that vibrant life of eternal hope, as Dad curled up in the sweltering attic on a hot summer’s afternoon with that little radio piping Rosey’s voice directly into his ear.

Baseball was his odyssey and, for a time, our shared journey. The hard truth about all such pilgrimages, though, is that they span time and expose all manner of human frailty. Dad’s body stooped more each year—the weight of his own life and limitations. He was bent even further by the burden of Mom’s debilitating illness—rheumatoid arthritis—that took the ferocious form of insufferable pain. Dad was helpless in the face of it—no way he could make her feel better. Every day, her body was wracked with pain, the joints distorted so much her hands would not close.

Somewhere in that saga, a particular line of that family story was draped around my shoulders: Mom became an invalid because I was born. That became part of our family odyssey—and I had to live with that onus for many years.

All in all: A curse from Hell played out in our tiny home. Eventually, Mom died too young. Just 63.

When we first laid that shared cemetery marker for them, more than three decades ago, the granite slab stood just above the blades of grass, formally proclaiming the family name even from a distance: PRATT.

Now, as Judith and I paid our respects, we could see Sandburg’s sod swallowing what we had tried to establish there.

I was about to say something about that to Judith—when another vivid memory stopped me cold.

It was Dad, standing right there in that field just after Mom’s death. We had just buried her and Dad raised his hand toward the distance—pointing over toward a line of far bigger stones in the distance. My eye followed his fingertip.

“This cemetery has two sides,” he said, “that one over there with the big monuments—and our side where everyone is equal.”

I can still hear his matter-of-fact intonation of that phrase: “Our side where everyone is equal.”

It wasn’t a boast. It wasn’t a political statement. It was fact. Just a fact about his place in this world.

And, somewhere in those words, I think there might have been another prayer.

God, in the end, we are all equal.

I stood beside Judith, as we stared at their granite marker all these decades later.

I gazed up along the cemetery’s gentle, sloping hillside with a lane running through it.

This could be that West Virginia ballpark with that lane right through the pitcher’s mound all the way to home plate.

For a moment, I closed my eyes. Someday—

Someday, before the grave marker is completely swallowed by the sod, perhaps my father will rise.

He might use the marker as the rubber on his pitching mound to hurl a few fastballs again.

He just might pitch a no hitter! Why not? Our dream once was to be baseball stars. Make it a no hitter!

We both set out on that journey with high hopes—and only discovered life’s many truths along the way.

Dad did make it to Forbes Field a few times, at least, as a spectator. But, no, I don’t think he ever could have afforded a ticket to a World Series game—and there were precious few, of course, in the span of his life. He was only a baby in 1909 when the Pirates won their first World Series. Then, throughout the rest of his life, there were only five more trips to the Series: ’25, ’27, ’60, ’71 and ’79.

Yet, every autumn—whatever had unfolded since March—October was a special season all its own, defined by hope. If not for this year, then for another.

Yes, there definitely is a prayer somewhere in that odyssey. One day—

One day—we might stand together in a field of our dreams, once again.

And tell the stories that define our lives.

At the end of our journey to Dad’s final field, Judith and I packed up our clippers and returned to our car.

We buckled up, started the car. All too soon, reality set in again. You can’t avoid the truth. All too soon, who will be left to tell these stories we love so much?

Well, in this moment, I’ve given this story to you. Even in this instant, it’s a part of your own odyssey. 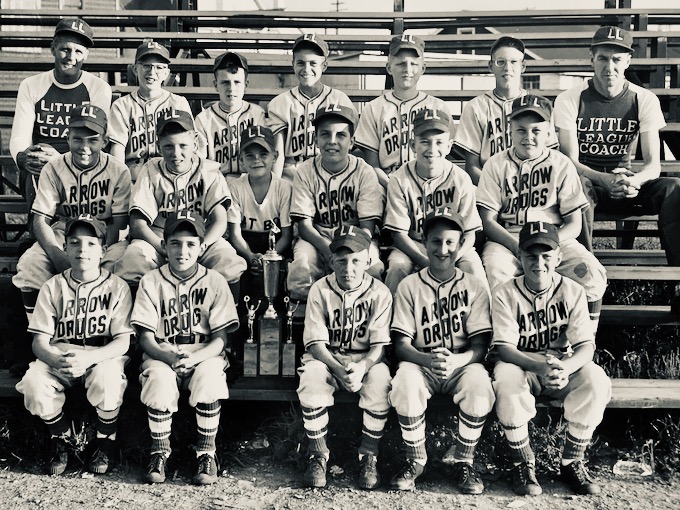 Dad as my Little League coach. He is in the upper right and I’m sitting second from his right.