WANT TO KNOW THE REAL STORY BEHIND MEMORIAL DAY?
The “first” has been claimed for more than a century by Waterloo, New York, but that’s mainly because the freed slaves of Charleston, South Carolina, didn’t have quite the connective clout as the men promoting Waterloo’s ceremonies. News of the Charleston effort never spread across the U.S. and eventually vanished from our national memory. The Waterloo effort was noble, too, but its claim to a “first” now must be qualified as perhaps a first in the North.
Finally, Yale historian David Blight is correcting our collective memory. His research clearly shows that the “first” of the post-Civil War memorial days (usually called “decoration days” in that era) was May 1, 1865, in Charleston, S.C. This was a huge event, organized and attended by 10,000 freed slaves. Their courage is inspiring, because they were making a large-scale public demonstration of their love and respect for fallen Union soldiers—within weeks of the end of the war.
Preparing for that first memorial day was an expensive, back-breaking effort in which a proper cemetery actually was built from the ground up by volunteers prior to May 1. On a spiritual level, these freed slaves were intent on starting their new lives by literally digging up and reshaping a key part of their past. The site of this first memorial day had served as a Confederate prison camp where Union soldiers’ bodies were heaped in a mass grave. Volunteers prepared for May 1, 1865, by digging up these discarded remains, burying them properly, adding a wall around the cemetery, plus a proper arched entryway for visitors. The site, today, is Hampton Park (shown at top today). If you know Charleston, you’ll realize there is no Civil War cemetery there now. Eventually, these remains were moved again to a new U.S. national cemetery in Georgia.
Never heard this story before? Well, neither had many in South Carolina, where Charleston Post & Courier writer Brian Hicks did a great job this weekend correcting history in this fascinating story.
Also, Hicks points readers to a primary source—a newspaper account from 1865 that David Blight also consulted in researching the era. You can read it right here.

FOR MONDAY, we’ve got a rich array of stories to share with you! Our ReadTheSpirit top story is a reflection by pacifist writer Johann Christoph Arnold that’s likely to surprise you. Plus, over at OurValues.org, we’ve had a provocative conversation about veterans unfolding for more than a week.

ALSO ON MONDAY, think about opening up “The Lord of the Rings” again—or, perhaps, firing up your DVD player and watching the films. It’s Gandalf’s 70th birthday! Well, truth be told, it’s actually the 70th birthday of Sir Ian Murray McKellen, the actor most closely associated with the role. Here’s a link to Sir Ian’s homepage online.
Sir Ian has played an enormous range of roles, including Shakespearean characters and popular Hollywood heroes and villains. As a boy, he survived the bombing of the UK by Nazi forces and faith played a significant role in his home. Both his father and his grandfathers were lay preachers. Later, a stepmother who was an important influence in his life was Quaker and showed him compassion that he recalls to this day.
Sir Ian once summed up his own religious background this way: “My upbringing was of low nonconformist Christians who felt that you led the Christian life in part by behaving in a Christian manner to everybody you met.”

TUESDAY MAY 26 is “National Sorry Day” in Australia, which might sound like an obscure idea to mention in our Spiritual Seasons column—but this particular observance is based on many years of hard work on racial reconciliation in Australia.
The whole process—and the observance—is shaping up as an international model to promote healing after years-long injustice on a broad scale within a country. For example, many Americans are talking about Australia’s process in trying to envision a new effort at national reconciliation in the U.S. with American Indians.
We’ve linked to the Wikipedia summary above, but a more impressive and helpful web site is the home of the National Sorry Day Committee itself. 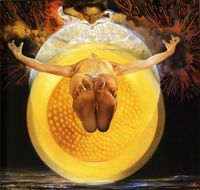 ON THURSDAY, millions of Orthodox Christians around the world mark the Ascension of Jesus,
an observance that dates back to the early centuries of the church and
is celebrated by both Western and Eastern branches of Christendom. (Western Christians celebrated last week, because the feast
falls on the 40th day after Easter—and their Easter was a week earlier this year.) The word “ascension” refers to
the Christian belief that Jesus rose into the heavens. THURSDAY EVENING begins the Jewish festival of Shavuot. Here’s a traditional Jewish group’s brief overview of Shavuot. And, here’s Wikipedia’s detailed article. This is an ancient festival celebrating the gift of the 10 Commandments by God to to the Children of Israel at Mount Sinai. It’s called the “Feast of Weeks” in passages such as Exodus 34:22. Traditional foods for this holiday are blintzes and cheesecake—and, as always with these cultural associations, there are many explanations. One says that the richness and sweetness of these foods remind Jews of their love of the Torah itself. Some Jews commit themselves to studying all night long. Homes often are decorated with greenery. Shavuot lasts one day in Israel—but may extend over two days in other parts of the world, depending on a family’s level of observance. ON FRIDAY, Baha’is suspend work and school for The Ascension of Baha’u’llah. He was the founder of the worldwide faith and died on May 29, 1892. His remains are buried in a shrine of global importance to Baha’is near Acre, Israel. Pilgrims are expected to visit the shrine particularly on this day. Baha’is comprise a fairly small community—about 6 million in 200 countries around the world—but they are an important group in their effort to peacefully form connections between other world religions. Here’s a very creatively designed Web site that weaves images and maps into the life story of Baha’u’llah. The site contains several photographs of the shrine and relics of his life. 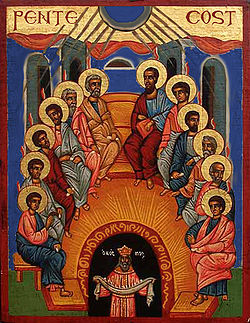 ON SUNDAY, more than a billion Christians around the world celebrate Pentecost, a Greek word meaning “50th day.” Christians regard Pentecost as the birthday of their worldwide church. In the book of Acts in the Christian Bible, the dramatic scene is described: After Jesus’ death, his followers were trying to preach his message in Jerusalem. On Pentecost, they felt a movement of spirit that allowed them to speak in such a way that people of every cultural background could understand them—language was no barrier. In the rapidly growing Pentecostal branch of Christianity, followers believe that God miraculously gave Jesus’ followers the ability to speak in “tongues” unknown to them before the miracle. Pentecostal Christians believe that their members should continue to exercise this ancient gift. Other branches of Christianity interpret the famous story of Pentecost differently. In virtually every Western Christian church, though, the day will be marked in some form. (Eastern Orthodox Christians will celebrate a week later, due to their slightly later Easter this year.)