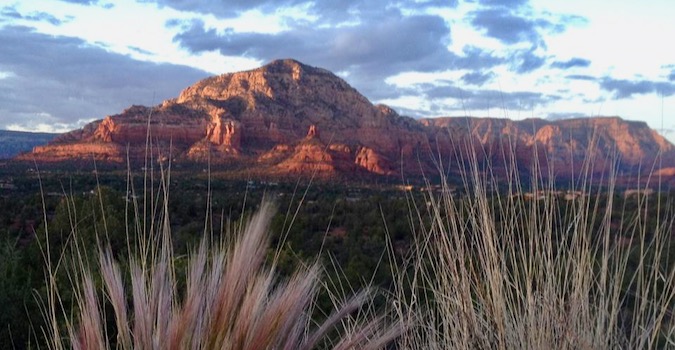 EDITOR’S NOTE—Last week, contributing columnist Martin Davis welcomed four other writers to respond to his personal story about a startling reminder that stopped him in his tracks. He heard the words: “It’s not about you. It’s about the people …” Then, the crowd was told to begin by looking at the person to the right—and to the left—and envisioning that the line of people we should care for extends on, and on. Martin’s column was headlined “Tomorrow, it’s no longer about you. It’s about the people …” This led author and educator Debra Darvick to think about her own passion for the American Southwest. Debra contributed this column as part of this national conversation about compassion. 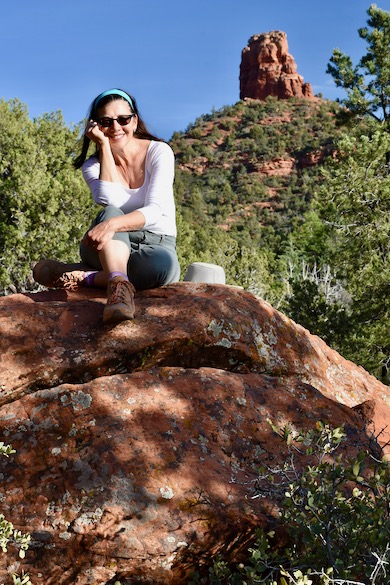 For the past few years my husband and I have spent part of the winter hiking in Sedona. The trails are plentiful and varied. Some weave easily through forests. Others require scrambling and careful placement and coordination of hands and feet. And some, in this high desert, run parallel to creeks that churn with winter rains and snow melt from higher elevations. Every trail offers breath-taking views of Sedona’s iconic red rocks.

Most trails are pristine. The trash I find usually amounts to small items—foil corners torn from granola bar wrappers, sometimes the odd scrap of plastic from a mountain bike or a bottle cap. Picking it up has been my way of saying thank you, of preserving this beauty and doing my part to keep it so.

However each year we have visited, I have noticed more refuse.This year was the worst. Not only was there more trash, but on some of the more popular trails, there was graffiti scrawled into my beloved red rocks. 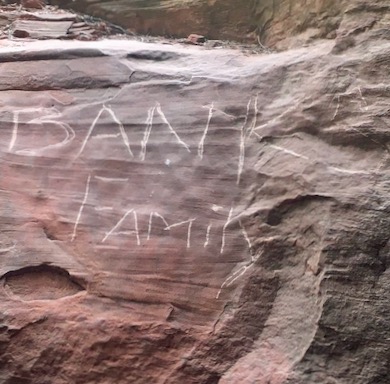 I was angry. Tic-tac-toe boards, children’s names, their birthdays, egotistical self-centered proclamations. Where were their parents? On one hike I gave up after scrubbing out thirty scribblings of interlopers who had no sense of reverence for the unparalleled beauty they were so privileged to see.

By the time I returned to the trail head I was furious. A ranger I spoke with said volunteer crews work 24/7 removing the damage.

Martin Davis’s column and companion essays on living for the person to your left and to your right made me look at my “good deeds” in a new light. When I was picking up the trash and washing away the graffiti, I was usually angry at the tourists who dropped candy wrappers and other trash. I fumed at the parents who allowed their kids to scratch into the rocks.

Then, I read Bob Alpert’s response to Martin’s column—an essay Bob wrote about Pal Joey, who spent 18 years collecting bottles and donating the deposit returns to the community food bank. It occurred to me that, even though I was caring for the land, I wasn’t really caring for those to the left and right. I was self-righteously pissed at them even as I was caring for my beloved red rocks.

Eventually I calmed down and just picked up the trash and wiped away the graffiti, thankful that I had an opportunity to leave my beloved mountains beautiful again. It wasn’t about the tourists, it was about doing the right thing calmly, without rancor. I imagine Pal Joey didn’t fume at the litterers as he picked up their discarded bottles. He probably saw each one as an opportunity to help others.

Before we left Sedona, I got in touch with the forest service to learn more about the volunteer corps who remove the graffiti. I aim to join them when we return. I sent along a slogan that might be used on the volunteers’ T-shirts and at the welcome center to educate the interlopers—uhhh, I mean visitors.

“Do right by the rocks; don’t write on the rocks.”

Martin’s column reminded me that attitude matters when it comes to devoting ourselves to those to the right and the left. Serving in anger is not serving, but self-serving. Living for the one to our right and to our left means doing what needs doing, all the while not claiming center stage.

DEBRA DARVICK tells her readers, “An armful of books is one of the most delicious feelings I can imagine.” You can find her own books, celebrating Jewish culture, via Amazon. Debra is also devoted to sparking great conversations. She created a unique set of conversation cards that pair gorgeous nature images with smart and inviting questions. Check out her latest innovation at PictureAConversation.com.