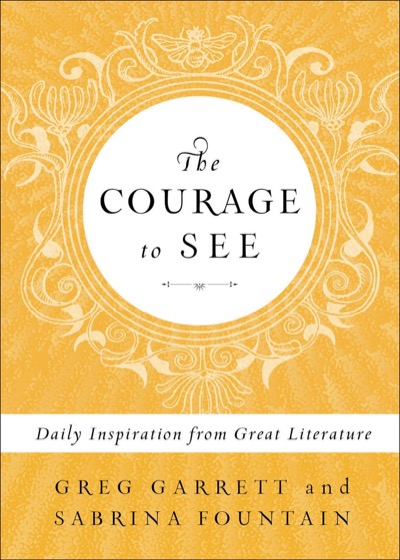 Got a book lover on your holiday shopping list? Inspirational writer Greg Garrett and the team at the Presbyterian publishing house is delivering the perfect gift: The Courage to See—Daily Inspiration from Great Literature.

Is your loved one fascinated by great literature? Garrett and the team at the Episcopal publishing house has the ideal add-on gift: In Conversation—Rowan Williams and Greg Garrett.

The first book helps you start your day with a bite-sized quote from a great book, coupled with an uplifting passage from the Bible and a prayer. Who is likely to welcome such a book? Pew Research reports that one third of Americans say they try to read the Bible at least once a week and more than half of Americans try to pray every day. They don’t all succeed at these intentions. Overall, that’s evidence of millions of Americans who are looking for a daily prompt—an inspirational opportunity waiting with that morning cup of coffee or tea.

That’s what Greg and his co-author Sabrina Fountain are offering in the first book.

Then, in his second book, Garrett dives deeper. Based on his career as a noted scholar in faith and culture, Garrett gives us a book-length dialogue with Rowan Williams, the retired Archbishop of Canterbury. Like Garrett, Williams is a noted literary scholar. Both men have written dozens of books over the years that have been widely read in congregations around the world.

If you do buy both books as a gift for your beloved reader—there’s an added benefit. Thousands of small-group leaders in congregations nationwide are looking for materials, right now, that they can use in discussions in early 2020. Give these books—or get them yourself—and you can look forward to the possibility of a rich conversation with friends about faith-and-reading this winter.

In other words: Yes, both books prompt individual spiritual reflection—and they both are opportunities to richer relationships with friends and family.

For the year-long book, The Courage to See, Garrett collaborated with Sabrina Fountain to add gender and age diversity in the selections chosen for these daily readings. Sabrina is younger than Greg and enjoys lots of writers who were not already on his reading list.

“The idea is that, between us, we’re giving you this really broad selection of writers in a day-by-day book,” Greg said in an interview about these books. “Every day you get a sample of thoughtful writing from people like Madeleine L’Engle or Maya Angelou or Shakespeare or Harry Potter or Robert Frost. There is the excitement about what you might find, each morning—who you might discover that day. Any particular day might turn out to be a new literary doorway through which you’ll feel called to step with that day’s writer. If you do go through this book with us, you’re going to find yourself discovering a lot of writers and great books that you’ve probably overlooked. I know that was true as I collaborated with Sabrina. She pointed me toward writers I had overlooked. Both of us are life-long readers and we continually surprised each other with passages we wanted to include.

“Now, let us surprise you. There are 365 doorways awaiting readers in this book.”

A ‘Courage to See’ Doorway on Day 1: Willa Cather The day-by-day book, The Courage to See, begins with the quintessential American writer Willa Cather, a pioneering journalist and a Pulitzer Prize winner. Her novels once were best sellers and defined the story of American expansion across the Great Plains and the American West.

“I will never forget reading Willa Cather’s Death Comes for the Archbishop as I worked as a journalist in Santa Fe one autumn many years ago,” I told Greg. “That experience in my life, reading Cather’s story in the Southwest where it was set, was something that forever shaped my own interest in reporting on American life with all of its multi-cultural textures.”

“Oh, I love that book,” he said. “There’s such a sense of place in her writing. Like you, that book has been formational in my life. That kind of landscape in which she set that book—it’s an important part of who I am. Then, her language of how the divine is working in the world, which is such an essential part of Death Comes for the Archbishop, is one reason I teach that book in my classes at Baylor.” Garrett is Professor of English at Baylor University.

“That first quote you have on January 1 from Cather is the perfect choice to start this book,” I said. “It’s from her novel O Pioneers! where she writes: ‘There are only two or three human stories, and they go on repeating themselves as fiercely as if they had never happened before.’ ”

“Right and, then, we add a couple of lines from Ecclesiastes to that and the prayer is ‘Help us to hear the stories of your children afresh’,” Greg said.

“It’s the same call we find in the heart of Frederick Buechner’s many books. I’ve got this short passage from Telling Secrets on a slip of paper right here in my office, because it’s so important to me in understanding a journalist’s vocation. In Telling Secrets, Buechner writes: ‘My story is important not because it is mine, God knows, but because if I tell it anything like right, the chances are you will recognize that in many ways it is also yours… it is precisely through these stories in all their particularity, as I have long believed and often said, that God makes himself known to each of us more powerfully and personally.'”

And so our conversation rolled for nearly an hour. Obviously, our lives as educators, writers and journalists differ from most readers’ vocations—but you get the idea of what we both mean in describing this book as 365 doorways through which you and friends can step into a host of new worlds.

Who Could You Invite to a Spiritually Surprising Conversation?

Where can such conversations lead? 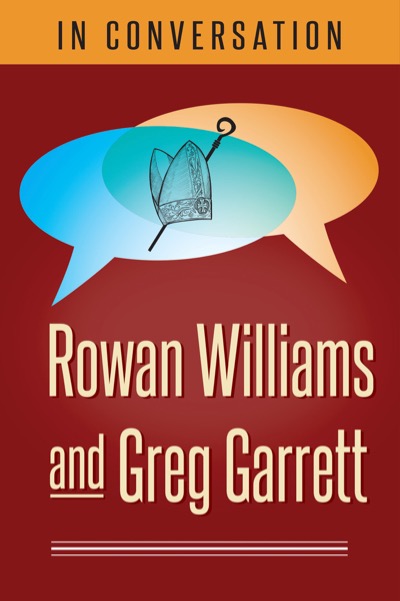 Well, the other book—In Conversation—is literally a transcript of an extended series of six conversations between Garrett and his long-time friend retired Archbishop of Canterbury Rowan Williams.

Can you imagine being part of a small group with folks like this who have a whole world of creative ideas on the tips of their tongues? Well, before you decide that’s never going to happen in your community, consider inviting an eclectic list of men and women to a small group—various ages, professions and life experiences. Who knows where your conversations might take you?

In the opening pages of In Conversation, Greg and Rowan chat about their families—as any warm visit between friends would begin. Then, very soon they are comparing notes on Greg’s lifelong appreciation of the music of U2, their shared love of Marilynne Robinson’s 2004 Gilead and the provocative writing of Anne Lamott.

Soon, they’ve woven into their dialogue some favorite passages from Doris Lessing, Ernest Hemingway, Walker Percy and William Shakespeare. Before they’re finished in these six conversations—even Dr. Who makes a cameo appearance!

“We wind up talking about a lot more than literature in that long dialogue,” Greg said as I discussed that book with him. “Yes, there are a lot of literary and cultural inspirations that we discuss. But, as we connect those dots, we’re also talking about spiritual essentials like daily prayer. How do we approach the discipline of prayer? What can we learn from each other?”

“Certainly,” I agreed. “You touch on a lot of very timely topics. But I also think both of these books we’re discussing today follow the same invitation you’ve been offering readers for many years.”

I continued, “After reading many of your books through the years, I would describe you as a welcoming companion and storyteller, inviting us to start a pilgrimage with you. That’s a different role as a public Christian voice, let’s say than C.S. Lewis, who was known during his lifetime for doing things like going on the radio as a Christian apologist.”

“Does that contrast make sense?” I asked Greg.

“Yes, it does,” he said. “I’m not a Christian apologist. I don’t get up on a stage with an atheist in front of a huge audience and debate Christianity. That’s not my role. Instead, I come to readers saying: This is the story that makes sense of the world for me—this is the truth for me.

“That’s my role as I wake up each morning and try to make sense out of the heartbreak in the world around us—and the possibilities I see in our faith. I keep saying and teaching and writing that this is the story I choose to live inside. I tell that story in many ways—and invite readers to come along in this adventure.”

GET THE BOOKS. Follow the links above to Amazon.

WANT TO LEARN MORE ABOUT THE ‘CONVERSATION’ BOOK? In the spring, Publishers Weekly magazine provided a more detailed Question and Answer column about Greg’s book with Rowan. 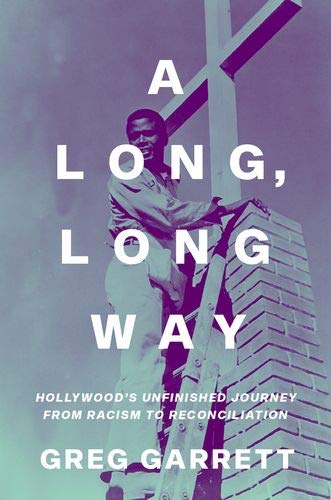 JUMP ‘A LONG, LONG WAY’ AHEAD! Oxford University Press already has Greg’s next book available for pre-order: A Long, Long Way—Hollywood’s Unfinished Journey from Racism to Reconciliation. Readers who are familiar with Greg’s approach to faith and culture will be eager to get this book, which stretches back to the infamous Birth of a Nation and looks at the struggle to portray race and diversity in Hollywood to this day. In promoting the book Oxford lists three of the book’s strengths as:

LEARN MORE ABOUT GREG. If you visit his Amazon author page, you can see most of his other books displayed—along with his own mini-bio and some additional photos he shares with readers. You also can click “follow” and receive updates on future books by Greg. For more background, there’s also Greg’s Wikipedia page, which tells even more about his life and work—and adds more links to explore his creative world.