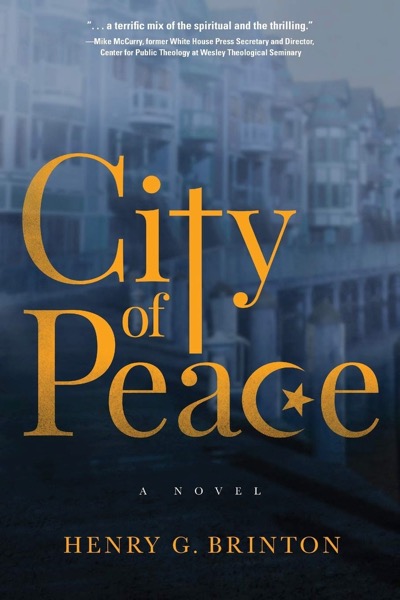 There are many reasons to buy a copy of City of Peace, the new “cozy mystery” by Henry Brinton.

First and foremost—this is simply a good read in an extremely popular genre. “Cozies” are mysteries that resolve a murder case in a small community of vivid characters. That’s in contrast to “procedurals” (think Law & Order or CSI) that focus on officials’ step-by-step work on a case—or “thrillers” (think Hitchcock or Silence of the Lambs) that aim for spine-tingling or gut-wrenching scenes at every turn of the mystery.

And there are lots of other timely reasons to read City of Peace, which Henry promises is just the first novel in a series focused on his new hometown:

We want to encourage readers to purchase Henry’s book and explore the novel—so we are avoiding spoilers in this Cover Story. However, we can share these basics:

The novel opens with the Rev. Harley Camden, who had been a successful United Methodist pastor of a large church, settling uneasily into a small parish in historic Occoquan. This move certainly was not Harley’s choice. His career as a senior pastor managing a large church staff was cut short by the trauma of losing his wife and daughter to a large-scale terrorist attack in Europe while they were enjoying a mother-daughter vacation. Emotionally devastated by this tragedy—and furious at terrorists who claim to be acting in the name of Islam—Harley leaves his big church and moves to a quiet little backwater to recuperate. The Occoquan River literally is a “backwater,” a tributary of the Potomac and ultimately part of the vast Chesapeake watershed.

Almost immediately, any hope that Harley will be able to work through his trauma vanishes. The daughter in a local Muslim family is murdered. On top of that, fears of violence in the community rise, including tension over a potential terrorist attack in the area.

As readers, we get to know—and to care about—Harley in the opening pages. The suspenseful question is: Will Harley find a balance between fear and fury—and his lifelong faithfulness—as he interacts with the sudden turbulence in his new community? 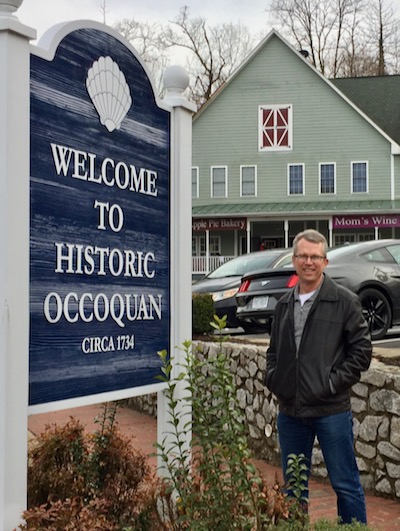 “My wife and I just fell in love with Occoquan as we were looking for a place to live—so Occoquan became both our new hometown and my muse as a writer. I love this kind of historic river town. I just love to walk through Occoquan and explore all the riches that are here,” Henry Brinton said in an interview this week.

Regular readers of our online magazine will recall Henry’s occasional columns that wrestle with matters of faith and contemporary culture. The biographical paragraph at the end of Henry’s columns explains that he is the pastor of a church in Fairfax, Virginia. His real-life congregation prides itself in being described as “a house of prayer for all people.”

“Those words from Isaiah 56 are on the wall behind the pulpit in our church,” Henry said. “We’ve got about 650 members and we try to live out that scriptural calling by welcoming people of diverse backgrounds. We also use that as a motivating force for our mission work to help others—and for our efforts to build interfaith relationships, as well.”

So, why did Henry move 15 miles away to live in Occoquan? “When my wife and I reached the point that we decided to downsize our home, we looked around the region and settled on a condo next to the Occoquan River. One thing that’s true of these historic communities along the water is that for generations they’ve understood what it means to be vulnerable. Huge forces of nature can roll in sometimes without warning and take their toll. Communities along waterways are literally on the edge of chaos all the time, which makes this a rich environment for mystery stories.”

There’s also a complex history of support for minorities that stretches back to the Civil War, Henry recalled in our interview. “This town is proud of its distinctive history,” said Henry. “In 1860, this was a Republican, pro-Lincoln stronghold even though it’s part of the Commonwealth of Virginia. In the 1860 presidential election, Lincoln received only 55 votes from all of Prince William County in northern Virginia—and all of them were from Occoquan. This was an abolitionist stronghold in Virginia.

“Then, for the past 150 years, this has been a town where a lot of unusual, counter-cultural things kept happening. It’s a great town for me to place my fictional minister, faced with the challenge of trying to build bridges between people.” 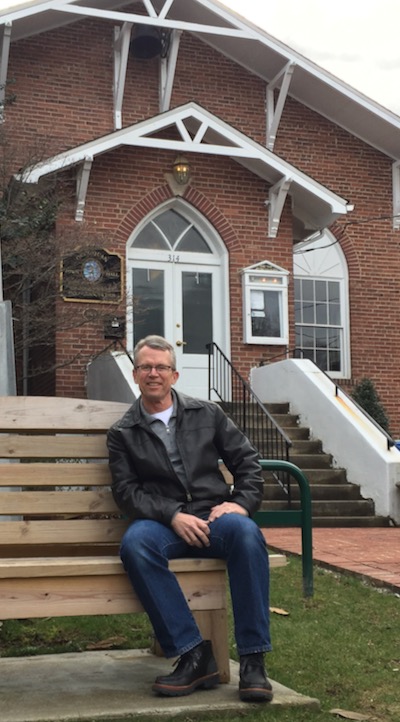 Henry Brinton outside the town hall where his book will be launched in early April. But, please don’t wait! His book already is available on Amazon. Just click on this photo to learn more.

The Jewish-Christian tradition is steeped in storytelling, Henry pointed out in our interview. “I’ve been preaching for more than 30 years now, so I’m well aware of the power of narrative in the life of Jesus. The parables—Jesus’s stories—played a central role in his ministry. So, when I wanted to engage a wider audience in the possibilities for reconciliation, today, I realized that a strong narrative was the best way to invite them to stop, spend some time and think about the possibilities with me.”

Henry also knew that cozy mysteries represent one of the most successful niches in American publishing today. If you haven’t discovered it, the online “mother ship” for cozy fans is Cozy-Mystery.com, where Henry hopes to have his new mystery series listed soon.

“So far, people in the community are quite excited,” Henry said. “We’re going to do an official launch in Occoquan in early April—right here in the town hall. Our Mayor Earnie Porta is a historian who has done a book on Occoquan. He’s going to appear with me and talk about the line between fact and historical-fiction in City of Peace.”

While some settings in the novel echo real-life locations in Occoquan, many have been adapted by Henry to ensure that no one mistakes his tale for real-life news. For example, there is no United Methodist congregation in Occoquan. “I made lots of changes like that to make it clear this was a novel,” Henry said. “We don’t really have the American Legion hall that’s in the novel—although we do have the VFW here.”

Henry enthusiastically supports that reassuring line between fact and fiction, he said, chuckling in our interview.

“After all, I don’t anyone to mistake my new hometown—a town I love—for the new murder capital of Virginia,” Henry said. “If that idea catches on, I’m in big trouble!”

Undaunted by any anxieties about possible push back from his fiction, Henry said he’s already working on the sequel to his first novel. “And, just to be sure that I don’t overplay the murder thing, this time the threat Henry and his neighbors face isn’t a murder. It’s more of a threat from—” then Henry paused. “Well, I guess I shouldn’t say any more about that. I don’t want any spoilers to push away readers!”