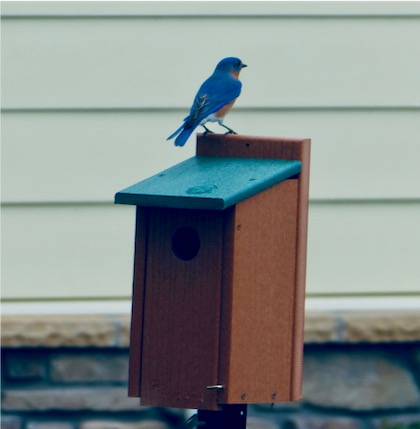 Our Bluebird House (with bluebird).

I just became a father!

You know I’m in my mid-70s and, earlier this year, I admitted to readers that I was the master caregiver who found myself, instead, receiving lots of care after surgery.

Yet, right now, I’m as proud as a papa can be. In fact, I’ve been reflecting on The Bible’s two accounts of the announcement that old Abraham and Sarah would soon become parents.

They laughed! Here’s the version where Sarah laughs; and here’s the one where Abraham has to cover his face, because he’s laughing so hard.

Abraham and Sarah encountered divine visitors. In my case, I spotted what turned out to be a heavenly little missive in the form of a request for Bluebird Monitors.

That’s what I asked about this strange request. As it turns out, these monitors in our community look out for the safety of our bluebird house. When I first volunteered, I naively imagined myself sitting, reading and occasionally looking up to see if any of these exquisite birds were chirping at me.

As it turns out, I was signing up to become a James Bond of bird espionage, intervening to protect the lives of our most vulnerable feathered friends. At least once a day, and often more frequently than that, I was tasked with looking out for the hovering father and the mother who often appeared just as she was leaving her home.

Soon, I found myself as overjoyed and anxious about our pending births as any expectant father. I was elated. It actually made me laugh!

I thought: So, that’s what tickled old Abraham and Sarah in such a memorable way that their mirthful story was handed down to us over thousands of years. Of course, they sealed their own fate, ensuring the story would never be forgotten. They named their child Isaac, which means “he who laughs.”

As a dutiful Monitor, I attended a training session where I learned that this particular corps of bird lovers looks out for the safety of both Eastern Bluebirds and Tree Swallows. Concentrated efforts through the establishment of Bluebird trails and provision of Bluebird nesting boxes are responsible for the gradual increase in the population of these endangered gentle birds.

Male Bluebirds are easily identified by their beautiful bright blue backs, head and wings, and their warm red-brown breasts and white bellies. Females are somewhat duller in color, even appearing gray and brown with a faded breast. Tree Swallows have iridescent royal blue backs and stark white breasts, and are slightly larger than bluebirds. They fly in a quick, swooping pattern as they snatch flying insects while bluebirds, on the other hand, eat ground insects—making the combination of these two species very beneficial to the community. 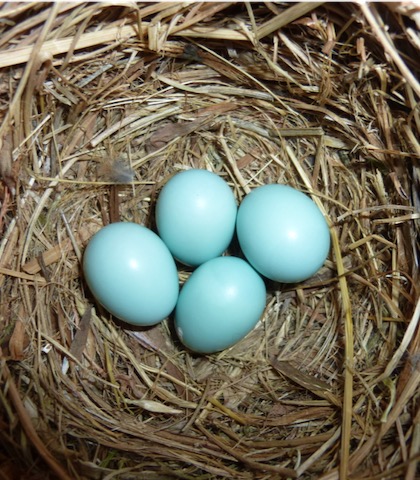 After The Disaster: The four eggs left in our bluebird house.

At the training session I was taught about the arch enemies of Bluebirds and Tree Swallows. I learned that House Sparrows are vilified as nest robbers, killers, destroyers of the lives and hopes of the prized birds. House Sparrows were vividly described as entering a Bluebird House, putting out the eyes and slitting the throats of Bluebirds. Just last week a Tree Swallow was found decapitated in one of our houses.

Oh, and did I mention snakes? As my training continued, I realized there were predators all around us!

My new job description: I was the James Bond defending the coveted birds from a host of villains.

Fortunately, I have a partner in this project. Liz is a seasoned champion of the prized birds. At first, we were delighted when we saw bluebirds checking out our box. We watched carefully as they came back often and began to build a nest—a remarkable engineering masterpiece with interlaced twigs forming a perfectly shaped cup. It wasn’t long until we discovered one egg and then upon our next examination we found five beautiful blue eggs!

Then, horror of horrors, we found an egg on the ground. Fearfully we opened the door and found the female sitting quietly on the remaining eggs. Of course, we have no idea what happened with the one egg.

Fathers of my age were restricted to waiting rooms, not permitted in the birthing rooms, when our own children were born. Now, half a century later, I was actively participating in a birthing process.

I was excited and hopeful for weeks—then I found myself laughing anew when we discovered our eggs had hatched. We got the news and a snapshot of the baby birds on Saturday May 11—just in time for Mother’s Day.

I have to admit: I’ve already got a pet name for one of those wee ones.

I call him Isaac. 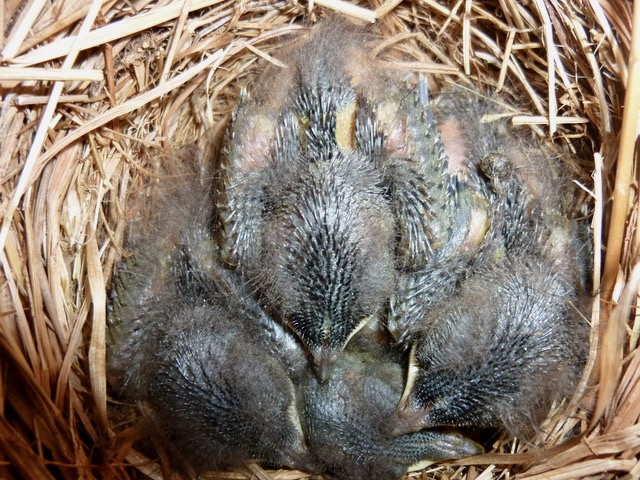 Isaac and his siblings.

Benjamin Pratt is the author of several books, including Ian Fleming’s Seven Deadlier Sins and 007’s Moral Compass. If you click the link to order a copy of the James Bond book from Amazon, you should know: No bluebirds were harmed in the publishing of that book.