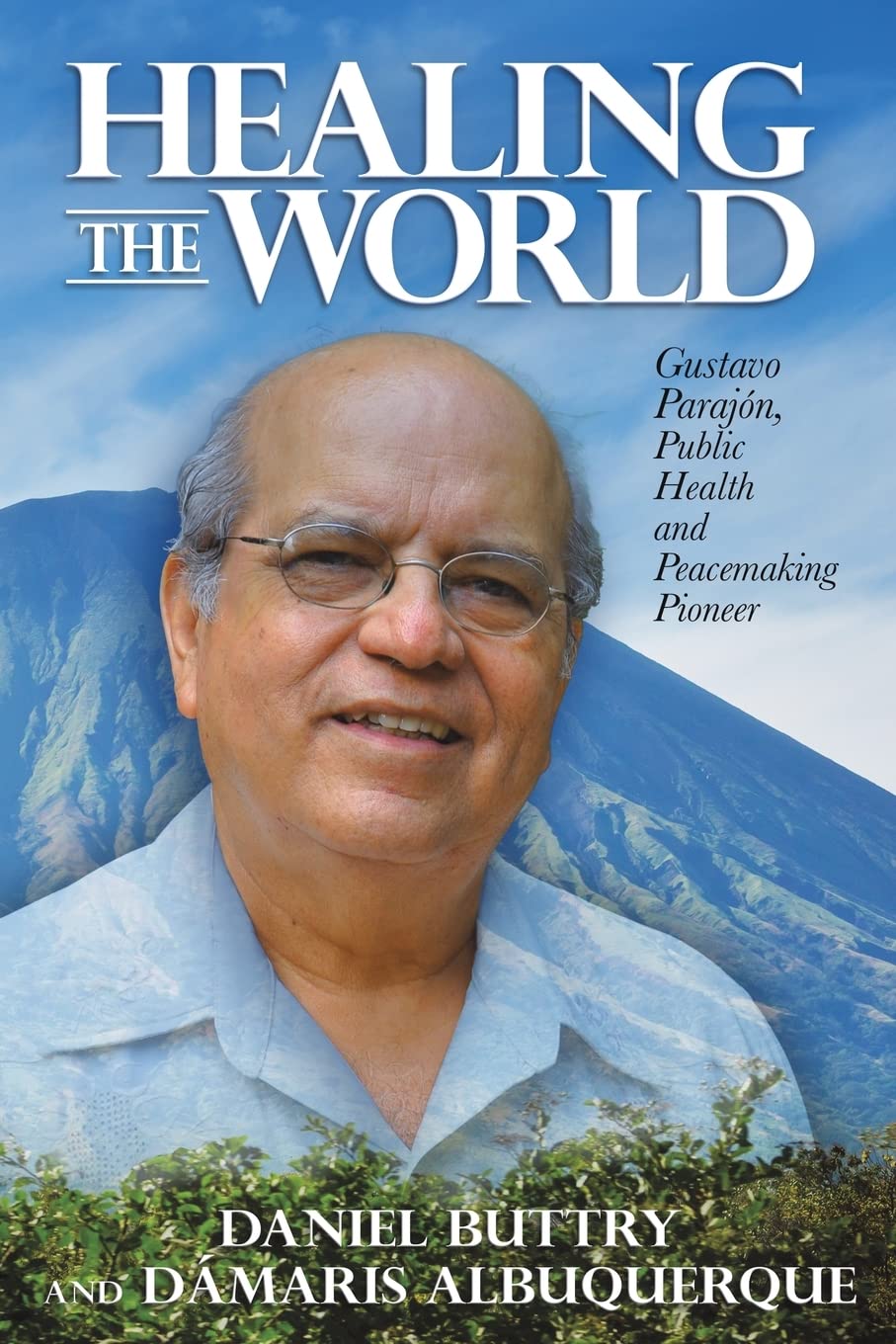 By DAVID CRUMM
Editor of Read the Spirit magazine

In an era when a Russian dictator can declare a war that kills thousands—and when angry political factions around the world routinely touch off deadly violence—millions of us are wondering:

Is there a better way to live?

Indeed, there is: We can look to the life of Gustavo Parajón (1935-2011), a Nicaraguan doctor and pastor who became so well known around the world for his peacemaking efforts that U2’s Bono once disguised himself so that he could quietly slip into a gathering of people listening to one of Parajón’s talks in the UK.

The distinctive nature of Parajón’s message transcended any particular political issue or public health challenge he was facing, say the co-authors of a new biography Healing the World—Gustavo Parajón, Public Health and Peacemaking Pioneer. What drew other global peacemakers to Parajón’s circle—from Bono to former U.S. President Jimmy Carter—was the deep well of faith-based compassion they found in Parajón. As he worked on public health and peacemaking projects, Parajón unfailingly found hope in each person he met—even when those people were men pointing guns at him.

“Dr. Parajón always saw the possibilities in each person he met,” said Damaris Albuquerque, co-author of the new biography. She spoke with us for this article by Zoom from Nicaragua, where she carries on Dr. Parajón’s nonprofit work. “It was when he looked into the lives of the people he met that he started to find the ways that each person could join with him in service.

“When he met a person, he always began with questions about them, their families and the work that they did. He had a phenomenal memory for people and he cared about them so deeply that, when he met them again, he could immediately begin asking about their families and their work. As he talked with people about their lives, he would make connections—connections with other people and connections with the stories he loved from the Bible. As he talked with people, he knew the Bible so well that he could draw on the wisdom from so many different stories! Soon, the people he was talking with found themselves agreeing to do things in service to the community that they never expected they could do.

“When others saw this happening, they were inspired, too. Even people who at first seemed to be enemies—they saw he was showing them a different way to work with others, a different way of living. His calm voice and the way he cared for each person—even his enemies—won them over.”

Daniel Buttry, who served for many years as the international peace trainer for American Baptist Churches, said that he partnered with Damaris on researching and writing this book because Parajón was one of his most influential mentors.

“I did not know him as well as Damaris, because she worked with him on a daily basis for years, but the moment I did encounter him, he became my mentor, too. There was so much he taught me from the way he lived his life, the way he talked about his faith and the way he worked with others. When I took on this new global role for American Baptist Churches in 2003, I came to this new challenge after years of working in more traditional approaches to peacemaking: from writing letters, organizing petitions and lobbying Congress to protesting in the streets.

“Gustavo showed me possibilities that we were not really seeing in the world, where civilian initiatives like the ones Gustavo undertook had not been viewed as an effective way of pursuing change,” Dan said. “When I took on this new work for American Baptist Churches, Gustavo was a mentor to me in the possibilities of nongovernmental players opening avenues for peace talks that had not existed before.”

Leadership Lessons from the life of Dr. Gustavo Parajón

One of he major take-aways in the new biography is this leadership model that Dan and Damaris describe of an ordinary person—who is not an official governmental leader—stepping up as a community leader or even, in Parajón’s case, as a national catalyst for change.  Throughout his life, Parajón worked as a local pastor and a physician on a mission to pioneer public health outreach to the neediest corners of his country—doing all of that despite warring factions that more than once endangered his life.

To illustrate some of the leadership lessons readers will find as they explore Parajón’s life in Healing the World, Damaris summarizes just a few of them this way:

And those are just a few of the dozens of take-aways in this inspiring story of Parajón’s life.

“The best words I can think of to describe him are: pioneer and visionary,” said Damaris. “He saw potential in people who he knew could carry on this mission he had started. He was a connector and an enabler, but he also had this way of seeing what was possible in the world—even in the worst of times.”

That’s why all of us can benefit from reading about Parajón’s life, Dan said. One of the greatest lessons from his remarkable life is that “he was not full of himself—he was full of what God was doing in the world and he always was trying to share the possibilities that he could see so clearly. And, right now, that certainly is something we all could use in our world.”

GET THE BOOK—Visit Amazon and buy your own copy of Healing the World—Gustavo Parajón, Public Health and Peacemaking Pioneer. The book also is available from Barnes & Noble, from Bookshop.org and from many other online retailers.

ENJOY THESE VIDEOS (and share them with friends)—To spark interest among your friends, congregation, nonprofit or small group, consider sharing the link to this story, as well as some of the following short videos:

READ A REVIEW BY BILL TAMMEUS—Veteran journalist Bill Tammeus published an early review of Healing the World and said, in part:

Gustavo Parajón’s life can serve as a reminder to many of us citizens of the U.S. that there’s a bigger world beyond our borders and that throughout that world we can find amazing people doing amazing things. … And his story can encourage others to devote their lives to being a healing presence in the world, whether or not they are physicians. … This is a story that needed to be told, and one that can help shape young lives today.