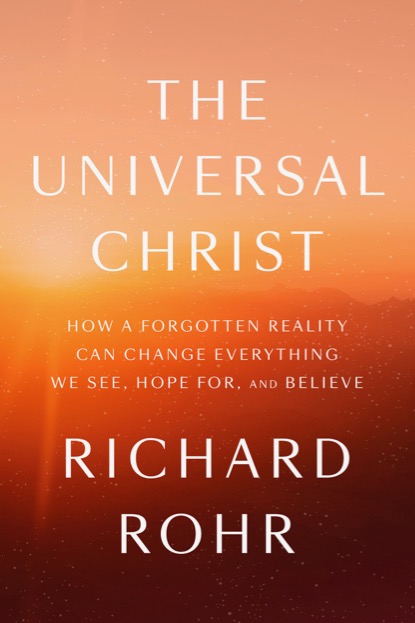 Best-selling author and Catholic teacher Richard Rohr knows why so many Christians can’t seem to embrace the world in a compassionate way: Their Christ is too small.

His new book has the grand title, The Universal Christ: How a Forgotten Reality Can Change Everything We See, Hope for and Believe. So, what is this “Forgotten Reality”? Rohr argues persuasively in his 260 pages that Christians have forgotten the very words of the Bible that tell us “Christ” embodies God’s timeless, creative power.

“The problem is that too many Christians still think of God as a male monarch on a throne who easily gets upset and has a big list he’s checking twice,” Rohr said in our interview about his new book. “That’s actually more of a pagan conception of God. So, we have to get that misconception cleared up. In this new book, I am trying to show readers that Christ really is an eternal presence in God since the very beginning of things.

“Too many Christians think that God only started interacting with us 2,000 years ago. That’s unthinkable to me! There are billions of years of God’s creation! My Franciscan tradition sys that creation was the first Bible. We point to Romans 1:20, which tells us that everything we need to know about God was encompassed in creation from the beginning.”

Rohr isn’t proposing some revolutionary idea. On the contrary, he said, “This book really is orthodox teaching that God is saving humanity, that God is saving history.” In the course of his book, he takes readers through many Bible passages that describe this cosmic concept, including Colossians 1:16-17: “For in him all things in heaven and on earth were created, things visible and invisible, whether thrones or dominions or rulers or powers—all things have been created through him and for him. He himself is before all things, and in him all things hold together.”

Rohr said in our interview, “What I’m talking about is right there in the Bible, but many Christians seem to have missed it. I’m trying to show readers that Christ is much bigger than what they are envisioning. As presumptuous as this may sound, I can describe it this way: Christ is a creation-based universal notion of the anointing of matter with spirit. Because of that, Christ’s people should never be seen as a separate tribe. Christ is too big to be encompassed or enclosed by any organization. If there’s going to be any hope for this world, we’ve got to start seeing Christ on this much bigger scale.”

What Does Rohr Say in ‘The Universal Christ’?

Why does this matter so much to Rohr?

In the opening pages of his new book, Rohr explains the dramatic impact of embracing this larger understanding of God’s purpose: “If my own experience is any indication, the message of this book can transform the way you see and the way you live in your everyday world. It can offer you the deep and universal meaning that Western civilization seems to lack and long for today. It has the potential to reground Christianity as a natural religion and not one simply based on a special revelation, available only to a few lucky enlightened people.”

Always a teacher and spiritual counselor, Rohr writes, “I want to be your guide in exploring these questions about Christ and the shape of reality for each of us. It’s the quest that has fascinated and inspired me for over 50 years. In keeping with my Franciscan tradition, I want to ground a conversation of such immense scale in the stuff of earth so that we can follow it like a trail of crumbs through the forest: from nature; to a newborn child with his mother and father in a lowly stable; to a woman alone on a train; and finally, to the meaning and mystery in a name that might also be ours.”

Rohr Readers Say: This Is Not Only a Catholic Book 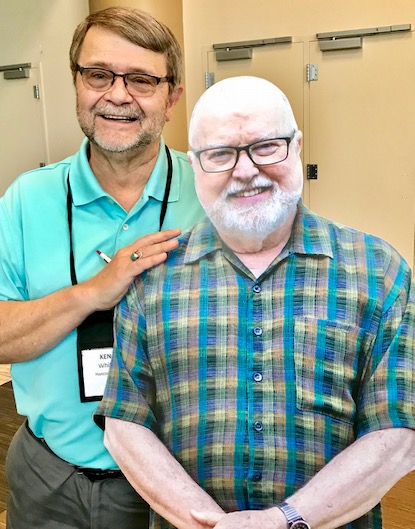 “He’s only cardboard!” Ken wrote as he emailed us this photo from the Albuquerque conference as he posed with the full-size cutout of Richard Rohr provided for the enjoyment of attendees at the event.

Over many years of interviewing Rohr and then reporting on his teaching and his books, I have often heard more from evangelicals than Catholics about the importance of his work. One of those avid Rohr readers is the Rev. Ken Whitt—a Baptist pastor, teacher and author who was inspired by Rohr’s work as he was writing his own upcoming book, God Is Just Love.

Ken and his wife attended Rohr’s March 28-31 Universal Christ Conference at the Albuquerque Convention Center to learn more about Rohr’s latest teachings. Ken told me, this week, that the conference was a high point of his year, because this book is so close to his own current message to evangelical readers.

“My brother Jim and I are both American Baptist pastors. We both got copies of The Universal Christ as soon as they were released recently and began reading at the same time. What followed was a lengthy series of calls back and forth,” Ken told me as we talked. “I told Jim in our first call, ‘I keep wanting to underline everything!’ Rohr’s books flow with inspiration like a river at flood stage.

“There’s a lot I could say about this new book, but I will boil it down to three points: Rohr is correct that Christianity, along with other great religions, are experiencing major course corrections—and he is pointing us toward the best course through this transformation. Then, in this transformational process, spirituality and science must be partners. I explore that whole realm at a much greater depth in my own book. And, finally, as we say ‘in Christ,’ we are talking about the essential unity and beauty, and especially the love, that saves both ourselves and all of creation.”

Rohr Is Not Alone in This Message

Ken Whitt immediately added that Rohr is not alone in sharing this more expansive message about Christianity’s inclusive potential. “I’ve started calling myself an evangelical liberal and I’ve been on the move in this direction for many decades. Rohr has been one of my guides, but I’ve also learned a lot from Richard Foster, Rob Bell, Marcus Borg, Diana Butler Bass, Phyllis Tickle and dozens more. Rohr is not alone. We are not alone. And that’s very important for people to understand.”

In my interview with Rohr, he said the same thing.

Having interviewed Rohr about most of his new books, over the years, I began this interview by telling him, “I have to say, right at the start, that I read your new book with the refreshing realization that this is a powerful echo of themes explored back in the 1980s by Matthew Fox in his classics like his breakthrough book, Meister Eckhart’s Creation Spirituality, and then he just kept knocking out these visionary appeals to broaden our thinking in books like Original Blessing: A Primer in Creation Spirituality and The Coming of the Cosmic Christ.

“I mean it as praise for your book, Richard,” I said in the interview. “I feel as though this whole movement is blossoming in ways that are very accessible now for readers.”

“I take it as praise,” Rohr said. “Matthew and I are friends and we mirror the historic partnership between Franciscans and Dominicans. Historically, they have been more systematic and academic than we are. Matthew has a mind I can’t begin to match. I come at this from my Franciscan tradition in a more intuitive, spiritual way in writing this book.”

In fact, these two best-selling Catholic authors met and talked recently, Rohr told me. “He came out to visit me and he was very affirming of what I’m saying. That was very kind of him to describe our work as parallel and complimentary. And I’m glad you sensed that connection, as well. You could say that Matthew and I both are beneficiaries of the best in classic Catholic education: very broad, including philosophy, psychology and history. That kind of education calls on us to keep expanding our thinking.”

In the interview, I read aloud to Rohr some of his own words from the book—the questions that are quoted earlier in this column, including, “What if Christ refers to an infinite horizon that pulls us from within and pulls us forward too?”

“In our conference in Albuquerque, we had more than 2,000 people who came to explore those kinds of questions with us. We created daily liturgies to try to communicate this expansive theme.

“What we are saying is not something new we are making up. So, people need to get over any initial shock they may feel that we’re somehow teaching heresy. We’re certainly not! We’re teaching right out of the Bible. If people read my new book they will find lots of specific references inviting them to go back and read their Bibles again. It’s all right there.

“Christ resists our attempts to limit Jesus to tribes that separate us from the world. This book is meant to help us open up our Christian imagination.”

Among the most popular Richard Rohr stories we have published over the years are:

ON AGING—Richard currently is 76, but back in 2011 when he was still in his 60s, we published this extensive three-way interview with Brian McLaren about the spiritual journey of aging.

‘IMMORTAL DIAMOND’—Then, in 2013, we talked about Richard’s new book Immortal Diamond—subtitled, The Truth for Our True Self. Mid-way through that interview, Richard and I also began talking about Matthew Fox’s pioneering work.