John Dominic Crossan at work. (Photo courtesy of the author.)

“All great religions offer humanity parables bigger than themselves. So also here. When Christ, rising from the dead after being executed for nonviolent resistance against violent imperial injustice, grasps the hands of Adam and Eve, he creates a parable of possibility and a metaphor of hope for all of humanity’s redemption.”
John Dominic Crossan in ‘Resurrecting Easter’ 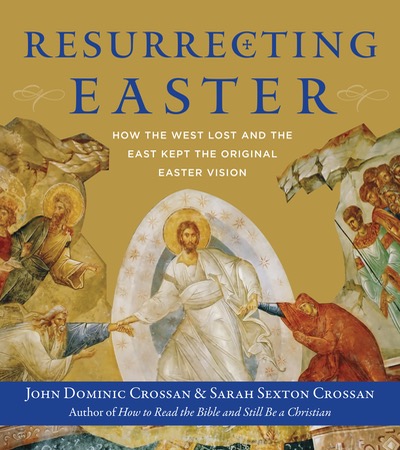 How do you envision the Resurrection?

It’s a timely question as 2 billion Christians around the world soon will mark the most important global holiday in this 2,000-year-old religion: Easter. (April 1 for Western Christians and April 8 for Eastern Christians in 2018.)

Close your eyes. What do you see? Is it a Superman-like image of Jesus soaring up-up-up into the sky triumphantly shedding the bonds of earthly mortality? Or, if you’re steeped in Western Protestant imagery, is it a friendly Warner-Salman-style Euro-Jesus surrounded by shimmering lights?

As you ponder that mystery, look again at the opening quote (above) from John Dominic Crossan’s beautiful new illustrated book about the Easter story. As Western readers, have you ever heard that during his resurrection Jesus “grasps the hands of Adam and Eve”? In fact, what Crossan and his colleagues reveal in this book is that the Eastern half of Christianity many centuries ago began envisioning the resurrection as connecting Jesus first and foremost with the world’s First Couple: Adam and Eve.

Puzzled? Intrigued? That’s the hope of this remarkable team: Crossan and his photographer wife Sarah Sexton Crossan (along with some early help in the research from the late Marcus Borg and his wife Marianne). Order a copy of this book today from Amazon and you should have it before Easter. Show this to your friends, your Sunday School class or your Bible-study group—and you’ll be sure to spark spirited discussion as friends explore these extensively illustrated pages with you. 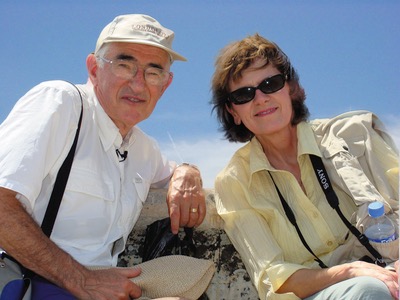 John Dominic and Sarah Crossan. (Photo courtesy of the authors.)

What turned into a 15-year treasure hunt began back in the years when our mutual friend Marcus Borg and his wife Marianne were regular traveling companions with the Crossans. Over time, the Borgs and Crossans turned their own two-couple travels to the “Holy Lands” into one of the world’s most sought-after tours.

“In the year 2000, Marianne and Marcus had been doing some pilgrimages to Israel focused on Jesus and they invited Sarah and myself to do a trip to Turkey on Paul,” Crossan said in our interview. “Sarah and I said we’d love to go with them. We started going every year to Turkey with about 40 people to walk in the footsteps of Paul to show the Roman world in which he lived and worked. We did that every year—but in 2007, the four of us started going a week ahead or staying a week after to spend time on things we wanted to see.”

Marcus died in January 2015 of a chronic lung disorder and, for a time before he died, he could not travel. The bulk of the research and writing about images of Jesus’s Ressurection—in other words, the heart of the book Resurrecting Easter—was carried out by the Crossans. (Note to regular readers: The Borgs are mentioned briefly in this new Crossan book. And, if you want more from Borg’s perspective, then stay tuned! Later this spring, we will feature an interview with Marianne Borg, who has gathered unpublished materials by Marcus for a new book, Days of Awe and Wonder.)

As Crossan looks back over their years of traveling, he describes the concept behind Resurrecting Easter as emerging from an accidental accumulation of details as they visited ancient sites.

“In fact, when we finally realized that there was this remarkable difference in the Eastern and Western depictions—basically whether Jesus rose alone or Jesus was shown pulling Adam and Eve along with him—we looked back through images and notes we had collected on earlier trips. I remember pulling out one of those folding postcards we bought during a trip we made in 1999 to a Coptic church in old Cairo. The postcard showed the church’s icons and we looked very closely at the photos. Finally, we saw what we had missed before! There it was! Jesus was yanking Adam along with him. The image was right there in that Cairo church, but we had overlooked it back in 1999.”

Where did those images emerge? And how far did they range across the known world?

“This book really is a detective story,” Crossan said. “Why did these images differ so dramatically from East to West?”

In the opening passage of this new book, then, Crossan concisely lays out the adventure that will unfold in the next 200 pages:

Resurrecting Easter is a debate about ideas and images or, better, a debate about ideas presented in and by images. It is a tour through thought and theology, an expedition across geographical space and historical time, and, finally, a passage from religious tradition to human evolution. It concerns a struggle between two visions of Christ’s Resurrection, studies a conflict between two images of Easter’s icon, and asks what is here at stake both inside and outside Christianity. This is how the problem unfolds.

The major events in Christ’s life and therefore the major feasts in the church’s liturgy—from the Annunciation to the Ascension—are described in the Gospel stories and so they can be depicted in any medium. … But there is one exception in that overall sequence, one event in the life of Christ that is never described in any Gospel story. Furthermore, this is not some minor happening, but the most important and climactic one of them all. This is the moment of Christ’s Resurrection, as it is actually happening. This—unlike all other Gospel events—is never described in itself.

Now are you intrigued? Are you already asking questions about Crossan’s claims?

He welcomes and anticipates that internal dialogue as we read! For example, one question you may have right away, if you are a regular Bible reader, is this: What about all that Gospel language and artistic imagery of the empty tomb? Isn’t that a depiction of the Resurrection? Read Crossan’s book to find out how he addresses that question and distinguishes between these various narratives, images and traditions.

Questions rise in each new chapter. The Crossans track down evidence through centuries-old artifacts and icons in many exotic locations. They answer the questions in text, charts and photos. Then, each chapter leaves us with new questions. You’re likely to find yourself turning one page after another—especially to see more of their fascinating full-color photos.

A MESSAGE WITHIN A MESSAGE

Like most great international treasure hunts—from fictional potboilers like Dan Brown novels to real-life research by serious scholars—there’s a “treasure” looming at the end of this long, dusty search for answers. This valuable nugget takes the form of a summing-up message from the Crossans in the closing pages. That final chapter is likely to be embraced as both timely and inspiring by readers familiar with earlier books by Crossan. In his view, Jesus was confronting the full, crushing force of imperial power with a message of nonviolence.

Here’s how Crossan connects this new appreciation of the Eastern Resurrection imagery with his past research into Jesus’ life and times:

“All great religions offer humanity parables bigger than themselves. So also here. When Christ, rising from the dead after having been executed for nonviolent resistance against violent imperial justice, grasps the hands of Adam and Eve, he creates a parable of possibility and a metaphor of hope for all of humanity’s redemption. Even though Christ is crucified for his nonviolent resistance, this Crucifixion and Resurrection imagery challenges our species to redeem our world and save our earth by transcending the escalatory violence we create as civilization’s normal trajectory. And the universal resurrection imagery makes it clear that we are all involved in this process.”

In our interview, Crossan said, “These days in Western culture, we love our super heroes, don’t we? So, one way to ‘read’ the Western images of Resurrection is that Jesus is a super hero who has a terrible Friday but he bounces back and lives happily ever after. But, that can lead us to assume: Don’t worry too much about this world because, even if we blow ourselves up, that’s OK. We’re all going to a better place.

“I hope readers will think about these questions as they read this book and discover all these new images of Resurrection that we have documented. What message are we getting from these images? What claim should we be making?”

DIG DEEPER INTO CROSSAN’S WORLD—Over the past decade, ReadTheSpirit has featured annual interviews with Crossan about his ongoing work pursuing these basic themes through many aspects of media: books, lectures, tours, videos and documentary films. For example, in 2010, we explored The Lord’s Prayer with Crossan, because of his new book on that topic. If you’re just discovering Crossan’s work, today, then you also might want to visit Crossan’s Amazon Author Page and choose one of his earlier books to enjoy.

VISIT OUR BOOKSTORES—You’ll find lots of books that are great for small-group discussion in our own ReadTheSpiritBookstore and our new Front Edge Publishing Bookstore.