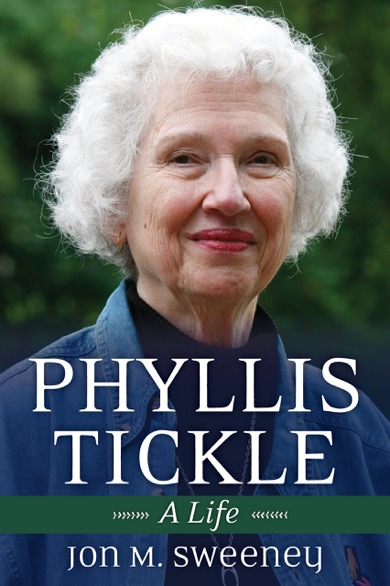 Phyllis Tickle got what she wanted—period. Any of our readers who encountered her will smile at that sentence. This ramrod-straight woman could unleash a persuasive hurricane—especially when she whipped it up with a heaping helping of her blunt Tennessee charm.

She wrote so many books that Jon Sweeney’s fascinating new biography of Phyllis devotes two pages to a list of her books, but admits to readers that this is “not a complete bibliography.” If someone eventually lists all of her publications, including manuscripts she edited plus her own ever-flowing river of journalism—the result would fill another book! For ReadTheSpirit, she wrote or contributed to a number of pieces over the years—plus she enjoyed at least a dozen interviews with me since our online magazine was founded in 2007. Across the country and abroad, she delivered so many public talks, seminars and retreats that Sweeney opens the story of her life not with Phyllis as an infant—but with Phyllis stepping up to a podium.

Oh, yes. And, before her death, Phyllis made it clear that Sweeney was to serve as her biographer—and she got that, too.

Of her many public facets, I recall Phyllis as a journalistic colleague. I first met her a quarter of a century ago when we were asked to speak fourth and fifth on a panel at a conference of media professionals about emerging trends in religion.

The first three journalists on our panel read prepared notes about changes in global religion, including carefully qualified observations about Pope John Paul II’s machinations. After the third speaker, some in the audience were beginning to nod off.

Then, it was Phyllis’s turn.

“I want to thank my learned colleagues,” she began, “but I’ve got to tell you all that if you truly understand the historic upheaval in religious authority today—” She paused to shake her head dramatically and began again: “If you honestly grasp the degree to which religious authority is being turned on its head, well—” Then, she pushed her chair back from the long table where we all sat facing microphones. She didn’t need one. She came around to the center aisle and ended that pause with a loud: “Well, if we understand what’s happening in religion today—all of our jaws should be dropping! Yes they should!”

Phyllis then delivered her stirring message about cycles of Reformation and the worldwide emergence of new sources of religious authority. She ended with a rousing: “We are living in remarkable times, my friends! I hope that you do not miss it!”

Listening to her in person—the first of many occasions on which I was able to work with Phyllis—I thought: She’s a modern-day Erasmus! Half a millennium ago, he was the brilliant, caustic commentator and chronicler of the Reformation. Like any journalist worth her salt, Phyllis dreamed of serving the world as a journalist in an era of historic transformation—and she got precisely what she wanted.

“When I think of Phyllis, I’ll always think of Erasmus—riding the crest of a religious tidal wave,” I told Jon Sweeney as we discussed Phyllis’ life and Jon’s new biography.

Jon thought for a moment and said, “I think it’s a good comparison.”

Naturally, I was struck by an otherwise small detail: In the middle of Jon’s biography, he describes Phyllis switching gears in her career and publishing a volume of her poetry. Her publisher? Erasmus Books.

SHE ‘GAVE VOICE TO A MOVEMENT’

When Phyllis died in 2015, major newspapers and magazines published obituaries. I have saved The New York Times obit and now have tucked my folded copy of that clipping inside the front cover of Jon’s book on my office shelf. If you are just discovering this amazing woman, today, let me share my favorite lines from the Times summary of her life:

Phyllis Tickle, who helped energize the religion publishing market in the 1990s, wrote dozens of books on spirituality and gave voice to a movement that believes Christianity is entering an epochal new phase, died on Sept. 22 at her farm in Lucy, Tenn., north of Memphis. She was 81. The cause was lung cancer, her daughter Rebecca Tickle said.

Ms. Tickle was the founding religion editor at Publishers Weekly, the leading journal in the book trade, serving from 1991 to 1994. In that post she identified and covered a rapidly emerging market for religious-themed books and helped publishers tap into its profitability.

Beginning in 2000, she also wrote a popular series of manuals titled “The Divine Hours,” devoted to the tradition of fixed-hour prayer. Meanwhile, she was becoming a leading voice in the amorphous but evolving Emergence Christianity movement, which rejects the hierarchies and many of the orthodoxies of the past and predicts a convergence of the various strands of Christianity, each of which had historically gone its own way.

THE ‘INTERPRETER AND CHEERLEADER’

What is most compelling about this biography is that Jon Sweeney aims his narrative at anyone who cares about faith in America today—and that long list includes anyone who writes for a living, as well as clergy and certainly anyone who leads a small group within a congregation. In 250 pages, he not only paints a portrait of an incredibly creative writer and activist—he also chronicles the turbulent times in which she relished her reign as a religious titan.

Plus, Phyllis loved to laugh—and there are occasional flashes of downright fun in these pages, too! You’ll certainly chuckle at a color photo from the day in Denver when Phyllis and the famous tattooed evangelist Nadia Bolz-Weber switched clothes and tried to swap identities as well. Phyllis even pulled on some faux-tattoo sleeves to complete the transformation.

Phyllis accomplished so many milestones in her life that Jon’s biography can barely contain her energy. Her activism in fostering inclusion of LGBTQ Christians, particularly among evangelicals, already has changed America’s religious landscape. She wrote encouraging introductions to Ken Wilson’s A Letter to My Congregation and to David Gushee’s Changing Our Mind—both of which are read coast to coast by Christians struggling toward becoming more welcoming.

To Jon’s credit as a biographer, he explains more about that branch of her activism than any of us who knew Phyllis understood during her lifetime. As Jon explains the story, her activism sprang from her compassion within her own family.

“She did so much! How do you think she will be remembered in 20 years?” I asked Jon.

“I do write about that at the end of this book,” he said. “I think she’ll be remembered for her work on The Divine Hours, the Great Emergence—and for being both an interpreter and a cheerleader for what was going on for a couple of decades in Christianity. But I also reveal a certain degree of pessimism about that legacy, as well.”

And rightly so. Some of Phyllis’s forecasts—especially when she relied heavily on her journalistic skills—were spot on. And sometimes, when she was exercising her talents as an activist, were more wistful than precise.

“Americans also have terrible memories when it comes to religion—you know that,” I said to Jon. “Nearly all Americans tell pollsters they know the Bible. But less than half can name the four Gospels. How many giants have risen to prominence—and now are forgotten—just in the past half century? It’s humbling.”

“I think you’re right,” he said. “But, even if people aren’t aware of the things Phyllis did and wrote—she effectively formed a generation of leaders in the church or the post-church or whatever you want to call these movements today.”

“And she formed a generation of publishing professionals, as well,” I added. “I’m interviewing you for ReadTheSpirit, a venture that was encouraged every step of the way by calls and emails from Phyllis.”

“She encouraged so many people. I mean—my goodness!—I can’t even imagine how she kept up her work load,” Jon said. “She would receive unsolicited manuscripts every week that she would read in detail and then provide comments before replying. I don’t know anyone else in publishing who does that!”

He paused a moment, then said, “I think one thing we definitely have to say about her: Phyllis was an incredible champion of people.”

FROM OUR ARCHIVES: Two of our most popular interviews with Phyllis over the years focused on her book, The Age of Spirit, and on her book, The Great Emergence. (Those titles link to the earlier interviews.) You may also want to read Phyllis’s Introduction to Ken Wilson’s A letter to my Congregation.