EDITOR’S NOTE—Judith Valente’s new book, How to Live, is so timely that we invited her to write our Cover Story, this week, focusing in particular on wisdom from the 6th Century Rule of St. Benedict about leadership. In this column, she is drawing on just one of the nearly two dozen reflections in her new book. This is a terrific choice for holiday gift giving. You—or someone you love—may want to read a chapter a day for several weeks. 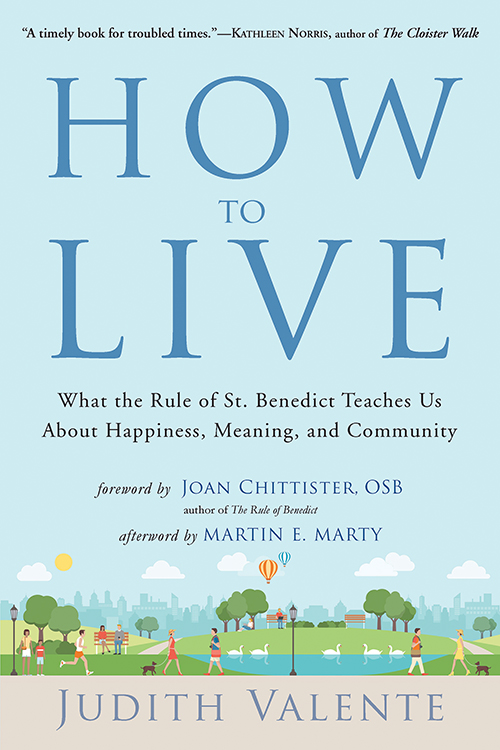 “He or she must not be excitable, anxious, extreme, obstinate, jealous or overly-suspicious. Such a leader is never at rest.”

That observation could have come from any number of today’s political commentators. Instead, the words appear in a 6th Century text called The Rule of St. Benedict. The work of Benedict of Nursia, founder of western monasticism, The Rule originally addressed people living in monasteries. Its insights call to us from across the centuries and remain surprisingly relevant. The qualities Benedict outlines for monastic leaders reflect many of the leadership gaps we face today.

The U.S mid-term elections are over, but the debate continues about the kind of leader our country desires—and needs. Benedict’s description of effective abbots, written 1,600 years ago, is remarkably similar to the conclusions historian Doris Kearns Goodwin draws about successful political leaders in her new book, Leadership in Troubled Times.

Humility is not something we learn in MBA and public administration courses. In fact, the opposite of humility—the hard-charging executive or politician—often wins attention and approval. In contrast, both Benedict and Kearns Goodwin place humility at the top of their lists of essential leadership qualities.

“Only in this are we distinguished—if we are found better than others in good works and humility,” Benedict writes.

Kearns Goodwin’s book explores how some of America’s greatest presidents, including Abraham Lincoln, Theodore Roosevelt and Franklin Roosevelt, evolved as leaders over time. In a recent interview on  The PBS NewsHour, Kearns Goodwin explained why humility is an important leadership trait.

“It means an awareness of your limitations so that you can learn from them,” she said. She cites the early political career of Theodore Roosevelt. “He had a swelled head when he was in the (New York) state legislature. He was just blistering, running around, saying terrible things about his opponents. And he was getting nowhere. He couldn’t get anything through the legislature.”

Eventually, Roosevelt learned the value of collaboration and compromise. “That’s the humility of learning from your errors,” Kearns Goodwin says.

Empathy is also high on her list. “You can develop empathy even if you’re not born with it,” she notes.

Along with humility and empathy, she adds resilience and self-reflection.

“Self-reflection—being able to acknowledge errors, build a team that you can share credit with and you can shoulder blame if something goes wrong. Learning how to communicate with people,” she says.

As a longtime student of the Benedictine Rule, I am amazed to see how many of Kearns Goodwin’s ideas dovetail with those of St. Benedict. He thought of the concept of servant leadership centuries before the idea entered the corporate lexicon. In the years I covered businesses for The Wall Street Journal, I heard many CEOs tout “servant leadership.” Rarely did I see any executives who actually behaved like servants of their employees, shareholders, and customers.

In a Benedictine world view, true leaders don’t place their personal interests above all else. Winning isn’t everything. Working for the good of all is. The best leaders, Benedict says, are teachers, not dictators. They are expected to lead not merely with stirring words, but by “living example.”

Benedict reminds us that leaders mustn’t become so obsessed with results or coming out on top that they neglect the well-being of those around them. Whether one’s arena is politics, business, academia, the not-for-profit sector, or a monastery, a leader’s foremost concern must be people. Or, as Benedict puts it so beautifully, the care of souls.

“Above all, they must not show too great concern for the fleeting and temporal things of this world, neglecting or treating lightly the welfare of those entrusted to them,” he writes. “Rather they should keep in mind that they have undertaken the care of souls for whom they must give account.”

At some point, Kearns Goodwin says, great leaders become willing to allow personal ambition to give way to “ambition for something larger.” In other words, for the common good.

The best leaders I’ve worked with in my journalism career are those who cared as much about my personal development as my professional output. They are the editors and news directors who understand that people aren’t interchangeable parts. They give assignments that play to their employees’ particular strengths. They give us the leeway to do our best work.

Far ahead of his time, Benedict recognized that human beings are complex creatures who don’t all respond to the same prompts. The most effective leaders “must know what a difficult and demanding burden they have undertaken … serving a variety of temperaments, coaxing, reproving and encouraging them as appropriate,” he says.

Above all, he emphasizes kindness and notes, “A kind word is better than the best gift.”

Perhaps Kearns Goodwin’s Leadership in Troubled Times and The Rule of St. Benedict should be required reading for every elected official and for all who seek to lead a corporation, agency or organization. Perhaps then kindness will replace incivility in our public discourse. Consensus will overtake conflict. The desire to serve will out-weigh our need for self-promotion and aggrandizement. Dignity and decorum will redefine our democratic process. JUDITH VALENTE worked for many years as a staff writer for The Wall Street Journal and The Washington Post and was a correspondent for the national PBS-TV program Religion & Ethics NewsWeekly.

She is the author of four spirituality books, including The Art of Pausing: Meditations for the Overworked and Overwhelmed. The full title of her new book is, How To Live: What The Rule of St. Benedict Teaches Us About Happiness, Meaning and Community.

She speaks and writes frequently on work and faith.