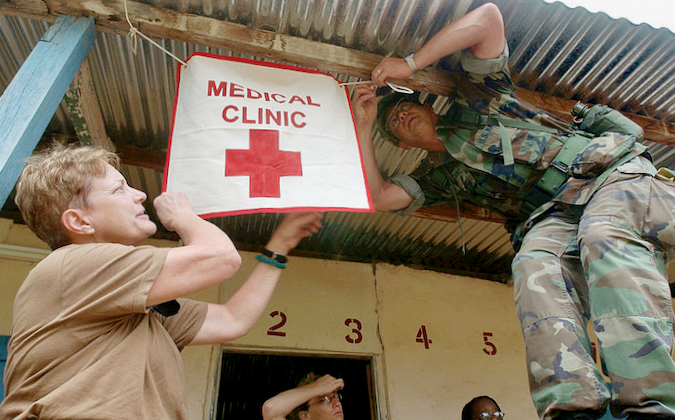 TAKE THE TIME TO GET TO THEM and you will be surprised by the global spectrum of stories you will discover. In this photo, U.S. Navy Cmdr. Linda Beede and Hospital Corpsman 2nd Class Roger McCune are hanging their mobile banner, signaling the beginning of the medical workday in Ghana. Their work was part of a U.S. Navy outreach program, typical of aid programs found in all branches of the service. (U.S. Navy photo by Lt. Todd Beveridge.)

Two US Troops Killed in Afghanistan
a headline from MilitaryTimes, June 26, 2019

As America ramps up for its annual Independence Day celebration, I find myself thinking less of bunting, barbecues and fireworks, and more of those whose lives are literally on the line. 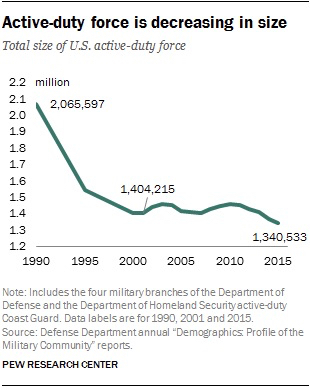 At no time since 1974 have fewer Americans been engaged in military service. According to Pew, the number of active-duty military has dropped from 3.5 million in 1968 (draft era) to 1.3 million today. That 1.3 million represents just 0.5 percent of the US population.

The number of veterans is also down dramatically. From 18 percent of the population in 1980, to just 7 percent today.

It’s also arguable that America’s love-affair with the military is at its highest level since World War II. Among the anecdotal evidence:

A GAP WE CAN BRIDGE ONE FRIENDSHIP AT A TIME

Clearly, we admire those millions of men and women who are serving now—or have served us in the past.

Our challenge nationwide is simply this: There’s a serious disconnect between direct experience with the military, and our support for it. As the numbers of veterans and active-service personnel dwindle—so do our direct ties to family, friends and neighbors. So, our responses to “the military” begin to fall into rote patterns.

This dynamic plays out in America’s churches. Evangelicals wrap themselves in flags and patriotic worship services, while more-progressive Christian communities take a respectful, but at-an-arms-length approach to even talking about the military. Both sides claiming God is behind their position.

As one who takes no part in organized religious practice, and whose son now proudly serves in the United States Marine Corps, my thoughts about much of this are evolving rapidly. 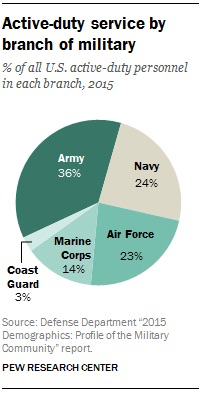 To mark July 4 this year, I’m asking you to consider a different approach to your celebration. Whether you love the military, or do not; whether you believe in the use of military force, or believe in diplomacy first, last, and in between—set your personal opinions aside and get to know someone who serves, or has previously served.

Ask them about their service.

Ask them about their lives now.

Ask about their families.

Develop a relationship that extends beyond July 4.

I’ve had that honor over the past year, as my son has joined the Marines and I’ve gotten to know some of the young men with whom he serves. Two weeks ago my wife and I were in Jacksonville, North Carolina, visiting my son. We met him and some of his friends at the local mall, where we walked, and talked, and hugged.

Now, when I read headlines announcing someone’s death in conflict, I think about these young men and women that I’m just getting to know. Your feelings about the military aside, these service members are first, and above all, human beings. They are not pawns in our culture war. Nor are they there for us to whoop and holler and cheer.

The have hopes, dreams and loves. And for various reasons, they have chosen a risky path to launch their careers.

These are the faces of the people behind the headlines.

They need us—all of us.

As do the families of those who sons and daughters are no longer here to celebrate the 4th.

This week, as you’re planning your favorite barbecue recipe, take a moment to think of someone you can reach out to—and make a personal connection. You’ll honor them best by simply getting to know them.

We have published a number of books over the years involving the military.

In 2019, we are proud to launch The Black Knight: An African-American Family’s Journey from West Point—a Life of Duty, Honor and Country.

In the late 1940s, the doors to the U.S. Military Academy at West Point were closed to most young African-American men. Finally, President Truman signed an order integrating the Army and a small handful of cadets dared to heed this new call. Clifford Worthy, the great grandson of slaves, was one of the few African-American men of his generation who was accepted and excelled as a Black Knight of the Hudson, a traditional nickname for West Point cadets. Worthy describes his journey to West Point, the many challenges he overcame both in his family and in the U.S. Army, including service in the front lines of Vietnam.

Half of the book is about Col. Worthy’s experiences in the Army, but the other half is about his family life. That deeply moving part of the book includes the Worthy family’s daunting experience of trying to raise a son with intellectual disabilities in an era when most medical experts wanted to lock such children away in institutions.

Earlier, we spent a year working with veterans and active-duty military service men and women through the Michigan State University School of Journalism Bias Busters project. Students in that on-going project produce books designed to bust myths and break down stereotypes. We say their books “answer the questions everyone is asking, but no one seems to be answering.”

100 Questions & Answers about Veterans is available through Amazon and all other online bookstores.

Want to know more about the Bias Busters project? Our most recent Cover Story was about their newest guide on the Millennial and Gen X generations.