One original 2008 proposal was for a slogan that included far too
many words. I sent him back this dramatically simplified line: “I Lift
Detroit In Prayer.”
Greg’s team was looking at a number of
possible images and logos to promote this idea. One example was a small
green plant emerging from a crack in an otherwise bleak urban sidewalk.
That is, indeed, a powerful image, but it’s an image strongly
associated with the movie, “Wall.E,” at the moment. I advised keeping
the whole thing extremely simple and putting just the basic words on
the bumper stickers and other visual media. We’re in such a confusing
downpour of media messages these days, it takes a crystal clear message
to cut through the daily “noise” in our lives. 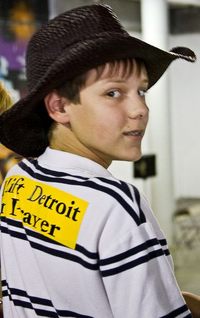 Greg had the idea of organizing a rally on the Detroit Riverfront,
but after more than 20 years of covering religious rallies as a
journalist, I urged him to keep the entire program as simple as
possible. I urged him not to set up rows of chairs, not to invite
dignitaries to speak, not to turn the focus of all this individual
effort on the part of praying men and women into a focus on a podium at
the river. Greg loved these ideas and sketched out an agenda that was
so short and so potent that we found ourselves regularly interrupted by
rolling waves of applause.

In fact, in my 4-minute talk to the crowd on September 14, one thing
I stressed was: “This event is not about what’s happening here,” I
said, pointing at the microphone where I was standing. “This event is
about what’s happening in your lives. You, the fellow up there in the
last row holding your baby in your arms. And, you—yes, you in the back
row there who’ve come so far to be here today. And you—”
I pointed to various people in the crowd.

Another one of our founding principles is: “The most powerful
spiritual stories are in the lives of ordinary people we meet.” We
believe that. Its truth was obvious in that rally.
On the morning after the huge event in Detroit, Greg sent me an email that expressed his sincere thanks and added, “The location, slogan, format, logistics, all were yours. You helped us
immeasurably to avoid several pitfalls that we would have never have
seen without your help. If it was a success, and consequently blessed
many, it was largely due to your involvement. You opened doors for us
that would never have been available otherwise.”

That’s true. It’s also true that the original idea came from Greg and
his congregation and it was their tireless work that spread this idea
virally though Unity networks. You can read more about Renaissance
Unity and the spiritual background of this idea in our Conversation With the Rev. Greg Barrett.