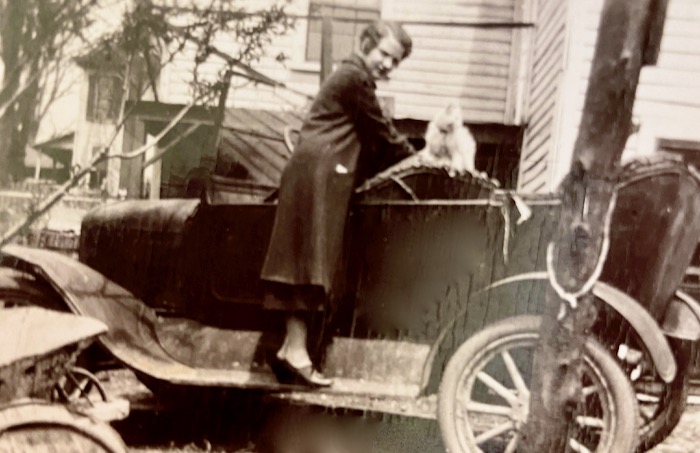 My grandmother Martha in 1934 at depth of the Great Depression. She was 22 as she posed with the family cat and the family car. Why do I call her “Martha”? When I was born, the story goes, my grandfather insisted he was too young to be called Grandpa, so we grew up calling them simply Martha and Ben. 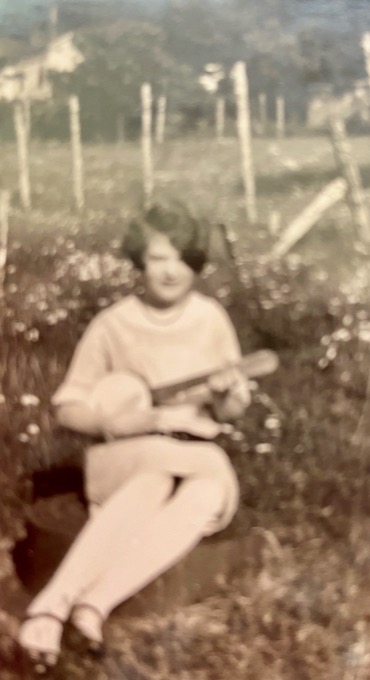 My grandmother Martha at age 16 in 1928, just a year before the stock market crashed.

My grandmother’s little house on Shenandoah Avenue in Durham, NC, still stands. Until I was 10, my brother and I lived just two houses down. We loved our daily walks to Martha’s house.

Her home was a palace!

The backyard where we played baseball seemed as big as any ball park we’d ever seen. The front yard where we talked with neighbors seemed as cosmopolitan and alive as the Upper East Side of New York.

I recall many of their names:

Alice, the single woman across the street with no TV, but a veritable Library of Alexandria.

Jack, who both scared me and amazed me at the same time.

The mailman who walked his route and spoke with us each day.

Martha always had a smile on her face and plenty for us to do. Together we would cook breakfast, wash dishes. On special days, we baked cookies. On some evenings, Christine from across the street would come over and we would dance. The only lessons in ballroom dancing I ever received were from her.

Our best times were spent on the front porch.

On summer afternoons, before her house was equipped with air conditioning, my brother and I would run to the end of the concrete walkway to the porch and Martha would play Simon Says with us. The game—and our laughter—seemed to keep the oppressive heat and humidity at bay.

When the games were done, she would tell us stories of the Depression.

“Golly,” she would say in her well-mannered Southern accent, “we had nothing. No food, no clothes, we all thought we were going to die.”

My brother and I always laughed at that part.

We laughed because the very thought of not having food, of not having clothing, was so far removed from our reality. My grandmother, we felt, was rich. And so, we believed, were we.

Golly! How Did Martha Get through It All … 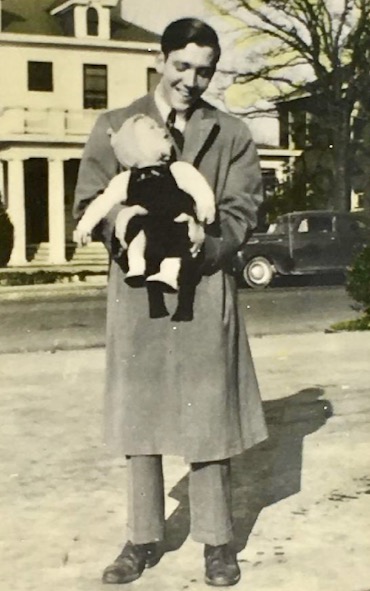 My Great Uncle Wallace holding my mother in 1942, just before he left to serve in World War II—and would never return.

My brother and I often recall those talks. They always made us smile. I suppose because—despite the fear her warning was meant to spark—Martha herself never seemed unhappy.

We’re a lot older now—about the age that Martha was when she told us those stories. My brother has two small children, and is a successful partner with Deloitte and Touche. I am much less successful, but certainly smart enough to understand well the challenges that lie before us.

And we are wiser about our grandmother. Her yard was no grand pasture, her home no palace, and our little neighborhood on Shenandoah Avenue no cosmopolitan center.

What we are less wise about is how Martha got through it all—with joy.

“I suppose,” my brother said the other day, “you and I will say to our grandchildren one day: ‘Golly, the pandemic was horrible. We all thought we were going to die.’ ”

As we spoke, we both wondered if our grandchildren would feel as safe and secure as the two of us did on Martha’s porch all those years ago. Secure enough to not really understand the fear that we will try to describe. And safe enough to laugh at our stories, as we did Martha’s.

I wondered: Will we get through this with all the joy my grandmother eternally displayed. Now many weeks into sheltering in place, we are getting a glimpse of the fear that my grandmother must have felt during the Depression. And I realize that most of us really are unprepared for the rigor of hard times ahead.

Now that I can begin to really appreciate the fear that grips us in times like this, I wish I could talk with her and learn how she got through it all.

The Best of Times in the Darkest Eras 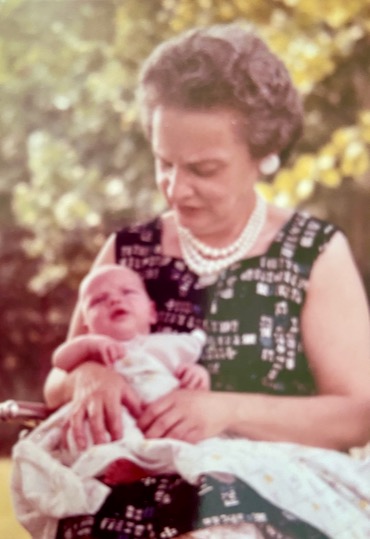 Martha holding the author in 1962, the year of the Cuban Missile Crisis, President Kennedy’s buildup in Vietnam, the publication of Rachel Carson’s Silent Spring, Nelson Mandella’s arrest that would send him to prison for many years, and James Meredith’s enrollment at the University of Mississippi escorted by federal marshals.

The best years of Martha’s life were lived in some of the darkest eras of American history.

Born in 1912, Martha was 17 when the Stock Market crashed in 1929. She spent the most carefree years of her young-adulthood working as a clerk at Rose’s in South Boston, Virginia. She married in 1935 at the age of 23, during the depths of the Depression. She spent those early years wondering how, with no money, they would survive and start a family.

In 1938, she went to work at Ligget & Meyers Tobacco Company sorting cigarettes as they rolled off the production line. She loved that job, and no doubt the security it brought. By the age of 30, she was living the nightmare of World War II, the horrors coming all the way to her doorstep. Her husband’s brother, Wallace, was killed in the Pacific when his boat was torpedoed. In my family still is a picture of Uncle Wallace holding Martha’s only infant: my mother.

Through it all, my grandmother was more than up to difficulties of living in troubled times. Faith was the cornerstone of Martha’s life. As the old Southern adage goes, she couldn’t carry a tune in a bucket, but her near daily signing of the hymn How Great Thou Art was always music to my ears.

I can still see her, standing at the kitchen sink, looking out the window, and singing:

One has to wonder how an individual can stand in awe of the divine in the midst of life that endured such struggle and pain. I can’t speak for Martha, but I do have a hunch.

In the Southern Baptist world in which I was raised, How Great Thou Art was not the hymn of choice. In church, the core of my religious upbringing were hymns such as Amazing Grace, with its strong theology of personal redemption and Holy, Holy, Holy, another powerful statement about the Trinity.

Martha’s hymn of choice was in many ways the opposite of these.

It was a hymn of modesty: “When I in awesome wonder.”

It was a hymn grounded in the natural world: “I see the stars, I hear the rolling thunder.”

It was a  hymn of quiet confidence, not evangelical soul saving: “Then sings my soul … How great Thou art.”

In all my memories of Martha, I never recall her talking about personal salvation or bringing people to Christ. I remember, instead, a woman of internal fortitude who lived through the toughest economic and political periods of the past 100 years of U.S. history—who despite the troubles she endured, focused on the beauty before her.

And, who no matter the difficulties, found God in helping others—a litany of names too long to even recall.

My grandmother’s “palace” on Shenandoah Avenue in Durham, NC, in 2020—the midst of the COVID-19 pandemic. Martha’s no longer with us, but her legacy of love endures as we retell the stories of her life.

I do not wish to downplay the pandemic, or the very real fears we all have right now about the future and what it holds for us and our families.

I do, however, hope that we maintain perspective through it. It’s been a difficult four weeks. We don’t know how many more of these weeks remain.

Martha endured difficult decades, when hope was even harder to find than it is today.

I do not carry Martha’s connection to the church—but I do carry her abiding sense of humility and wonder at the amazing world that we inhabit. And I carry her belief that in trying times—caring for others is how we move forward. One day at time.

A day filled with burdens and fears.

A day filled with opportunities to care.

A day filled with moments to just sit still, humbled, by the world all around us.

Golly! I wish I could stand on that porch again and hear those stories of the Great Depression. And feel again the strength of the woman who told them.

We need these stories now more than ever.