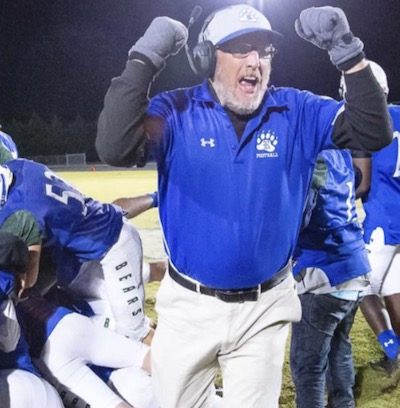 Here I am celebrating after my kicker hit a 32-yard game-winning field goal on Senior Night. Fifteen minutes before, I was chewing him out for not executing the proper kick-off play. Sports are demanding, and hard. That’s what makes the lessons they teach so rich.

As I pulled into my driveway this past Sunday following a musical-chairs-type trip to the grocery store, I spotted my neighbor’s high school daughter in her front yard practicing her pitching. A rising high school senior, she’s both a talented student and a gifted athlete who is receiving serious recruiting attention from top-tier Division I universities.

I stopped to offer her my sympathies. Her softball season at school never got off the ground this year because of the Covid-19 outbreak. Track and field, Lacrosse, Cross Country, Soccer, Swimming and Diving all had their seasons canceled, too.

Now, I am concerned that high school football—the sport that I coach—will be the next athletic competition to fall victim to the pandemic.

In a Nation Divided, a Unifying Ritual

Millions of other student-athletes, coaches, parents and communities share our concerns. Losing high school football, of course, would mean losing the celebrations and heartbreaks that play out on more than 16,000 football fields across the nation every Friday night under stadium lights.

In a nation divided, it’s one of the few rituals that still brings us together.

My concern about the forthcoming season, however, goes far beyond athletes missing games and communities missing reasons to gather together.

What I worry about most are the critical life lessons these young athletes aren’t getting from their coaches: lessons about character, humility, dedication, commitment and living for more than yourself.

We are not talking about just a few privileged athletes who play football and basketball. According to data from the NCAA and Statista, just under 50 percent of high school students take part in high school athletics in some way during their teenage years.

Things Our Children Need to Hear

I have seen from several vantage points the critical role these coaches play in students’ lives. As a father, I value coaches because they can say things to my children that they need to hear, but they won’t hear from me. As a coach, I understand that my job is about so much more than teaching Xs and Os. It’s about supporting and being there for “my guys.”

Many coaches were mentors in my life. Mr. Finch taught me that there are ways get any point across, if you’re willing to change your approach. And Coach Brown taught me that failing as a football player just means you’ve failed at defensive end—not at life.

Such lessons are hard learned, and we all need to hear them. Coaches, perhaps more than anyone else, are best positioned to deliver them. And they do a great job of it.

My desire to capture the wisdom of coaches launched me my first book project. It’s tentatively titled 30 Days with America’s High School Coaches, and it will be published by Front Edge Publishing. (To learn more, or to suggest a coach to interview, check out this synopsis.)

For this book, I am interviewing high school coaches across the nation and gleaning the critical lessons that they impart to their students so that I can share them with you.

And the lessons I am hearing are truly inspiring.

As part of a chapter on a coaching legend in the state of Michigan, I have interviewed several of his former players. Many were truly outstanding athletes who went on to win national championships at the Division I level in college. It was a call from a former player that I didn’t expect, however, that really caught my attention. This individual told how during his freshman year in high school, he heard this famous coach talk at a pep rally.

That talk struck him especially because his coach talked about everything but football. “I knew right then,” he told me, “I wanted to play for him.”

He eventually did. Over the course of his entire career, however, he never played more than a few minutes of varsity ball. It didn’t matter. Some 50 years later, Coach still knows and talks with him, and writes him personal letters. Coach was there for him when his wife passed away earlier this year. And Coach was there for him throughout his life, through highs and lows.

Talk about caring for the “least of these.” This Coach taught this gentleman that everyone matters. Whether you go on to win national championships at Notre Dame, or sell used cars in your local community.

A soccer coach in South Carolina is another example. Among his players was a young woman whose father served in the military and was often called away from home. Her mom had to carry the load at home. And Coach was there every step of the way.

No wilting flower, the Coach was hard on his players. Some parents might see this and think of a coach as being cruel. But what he taught this young woman to do was to stand her ground and defend herself.

During one hotly contested match, this young woman watched as the opposition scored a go-ahead goal. Coach let her know in no uncertain terms this was on her. She was furious, but she gathered herself, finished the game, then thought through what coach had to say.

The next day she approached him: “I did not blow coverage, let’s look at the game film.”

The end result? She became a coach on the field. She defended herself, and learned to talk to authority figures in a constructive manner. How many adults today would benefit from learning to deal with problems this way?

We All Need a Push

As I finish this column, I’m prepping for position meetings this evening with my own unit. We’re doing all our coaching for now on Zoom. We may not be able to be together or to practice, but we are using any means necessary to prepare our guys for the season. They will be ready when the lights come back up.

One of those life lessons: Control the things you can.

I truly believe that teenagers not only need the kind of life teachings their high-school coaches offer, they crave it.

In fact, I know it. You see, just this morning I got a call from one of my players.

“Coach, I have a question for you—”

“Sure,” I said. We talked football for a bit. And we talked about him and his family.

As we were hanging up, he said. “I can’t wait to hit the field again, Coach. I haven’t been screamed at in months.”