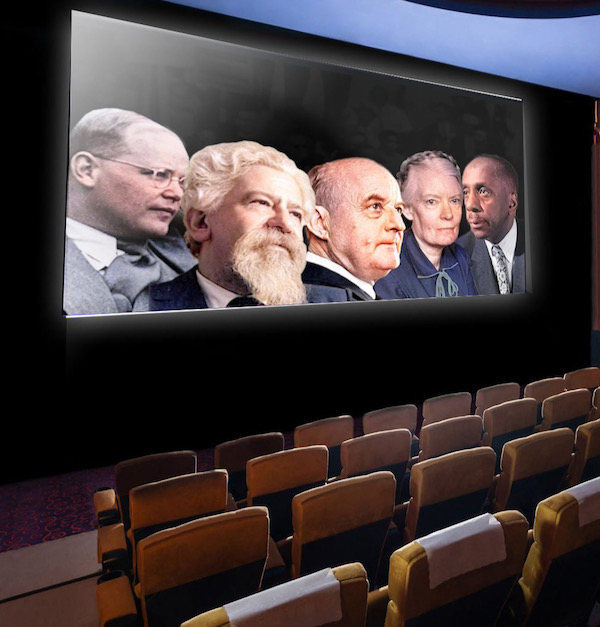 EARLY EACH YEAR, especially during winter weather or the Christian season of reflection called Lent, many congregations challenge members to reflect on faith through the lens of film. During Lent especially, congregations like to add mid-week or Sunday-afternoon programs to encourage their members’ spiritual reflection.

The series is called Prophetic Voices, a set of five documentaries Doblmeier has produced over the years for public television and has personally shared nationwide in special regional screening events he has led. These five thematically related films are available now in DVD or via a license to stream the documentaries, whichever format you prefer. Right now, Prophetic Voices is available through Martin’s website: Journey Films. Plus, the DVD set also is available via Amazon.

When Martin himself leads a screening event, he finds that people make many helpful connections with issues they face in today’s turbulent world.

“All five of these—Bonhoeffer, Niebuhr, Heschel, Thurman and Day—faced life-and-death issues, just as we are facing so many very difficult issues today,” Doblmeier said in an interview about the film series. “The best way to prepare ourselves to face the defining issues of our time is to learn about the lives of those who grounded themselves in their faith traditions and found confidence to make the prophetic witnesses that inspire us today.

“They were not naïve. They understood the costs,” Doblmeier continued. “Bonhoeffer paid the ultimate price with his life. Heschel and Day found themselves on FBI watchlists and were harassed. Yet, these five showed us a moral and ethical framework that can strengthen us in today’s world.”

Who are these five prophets featured in Doblmeier’s film series?

Along with these five mini-bios, we are adding links to the reviews that our Faith & Film Critic Ed McNulty published in his Visual Parables section of our magazine as these documentaries debuted individually over the years.

DIETRICH BONHOEFFER—Despite his untimely death at the age of 39 at the hands of the Nazis, German-born Dietrich Bonhoeffer has emerged as one of the greatest theologians of the 20th century. Educated in both Germany and at Union Theological Seminary in New York City, Bonhoeffer became one of the early voices of resistance to the rise of Adolf Hitler. He helped form one of the seminaries for the rebellious Confessing Church, a breakaway church whose members resisted National Socialism. To learn more, here is a link to Ed McNulty’s Visual Parables review of the Bonhoeffer documentary.

REINHOLD NIEBUHR‘s Serenity Prayer remains one of the most quoted writings in American literature. Yet Niebuhr’s impact was far greater, as presidents and civil rights leaders like Martin Luther King, Jr., often turned to Niebuhr’s writings for guidance and inspiration on the most volatile political and social issues of the 20th Century. Here is Ed McNulty’s review of the film.

HOWARD THURMAN—Born the grandson of enslaved people, Howard Thurman became a “spiritual mentor” for the Civil Rights Movement, inspiring many of the leaders including Martin Luther King, Jr., Jesse Jackson and Congressman John Lewis. Thurman’s book Jesus and the Disinherited was said to be in King’s briefcase where ever he traveled. Today it is considered a spiritual classic. Here is Ed McNulty’s review of the film.

DOROTHY DAY was a grandmother, anarchist, prophet, journalist, pacifist and much more. The FBI once considered her a threat to America’s national security. Despite often being critical of leadership in her own Catholic Church, the Vatican is now considering her for sainthood. Here is Ed McNulty’s review of the film.

RABBI ABRAHAM JOSHUA HESCHEL was a mentor to Martin Luther King, Jr and the entire Civil Rights Movement, a leading critic of the Vietnam War, a champion for Soviet Jews and a pioneer in the work of interfaith dialogue. Here is Ed McNulty’s review of the film.

Throughout his career, Doblmeier always has encouraged congregations to use his films to raise awareness and inspire action in their local communities. He makes that easy with his two-tiered level of permissions to show his films for groups.

“We came up with this approach a number of years ago,” Doblmeier explained in our interview. “The majority of people who lead congregations want to play by the rules in using films and streaming media. So, here is what we ask:

“If you want to show these films in your Sunday School class or your small group, we regard that as fair use. Just buy a set of DVDs or the pay the basic streaming fee. But, if you want to use our films to organize a larger public program, or in this case a film series—as a way to invite people outside your own immediate sphere maybe to come to your congregation for the first time to see these films and join in discussions—then we regard that as a public screening. If you are planning a larger public event, then we expect churches to pay for the public screening rights. But, even then, we try to be helpful with the costs. Along with the higher cost, we include five sets of the DVDs at that price—and congregations often use those as gifts for donors who help to pay the higher fee, or they sometimes sell the sets of DVDs as a way to raise the funds.”

The basic streaming rights can be purchased through this page, currently for $39.95.

If you prefer to own a set of the DVDs, rather than buying the streaming service, then go to Amazon and you will pay the same price, $39.95 currently.

If you do want to organize a five-week public film series, then the public-screening rights are explained and can be purchased here.

Here is a Journey Films video clip to help you inspire others about viewing these films: